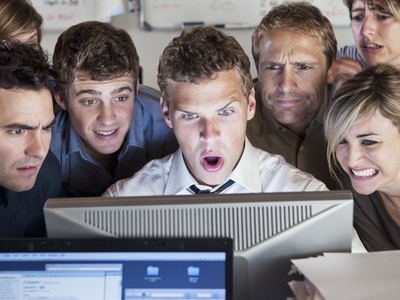 A first impression was once a matter of rehearsed one-liners and the right pair of shoes. Now, it’s down to a good profile picture and your last public tweet.

No one could have predicted the impact that Facebook would have on dating back in 2007, when I first used the site to scope out potential college roommates alongside my high school girlfriends. “She’s cute, but do you really want to live with someone who’s got Buffy The Vampire Slayer listed four times on her profile?” Today, our first generation Macbooks have morphed into iPhone 4s, and we’re doing more Facebook recon on potential boyfriends than roommates. “He’s cute, but do you really want to date a guy who has Lost listed four times on his profile?” In a world where our social, financial, and political lives are lived online, how long did we think romance could evade the thirsty black hole of social media?

“Manage your digital image because it supersedes your self,” advises Steve Ward, professional matchmaker and host of VH1’s Tough Love. Ward, who is currently working on his own online dating network, is notorious for his outlandish and often uncensored approach to relationship coaching. But what the dating guru lacks in verbal finesse, he makes up for in experience and insight. “Women can absolutely attract or repel a guy through social media. The digital world is a bridge to the physical world.”

So what’s a girl to do when she’s been taught that Facebook is just a way to stalk ex-boyfriends and save paper on party invitations? The first step is realizing the extensive influence social media is exerting on our most personal relationships. “Bottom line: these networks are not innocent. One in five divorces are caused by Facebook,” Ward cautions. “What women don’t realize is that when it comes to the internet, less is more.”

According to Ward, who after a single conversation I can only describe as an alpha male, the most common mistake women make on Facebook is the most important to avoid. “If you have a bad profile picture you’re done,” he says matter-of-factly. Men are visual creatures. It’s something even the poorest written self-help book can tell us, and yet scores of women sabotage the chance of attracting men by plastering unflattering photos of themselves all over the internet.

There’s one pose in particular to avoid: duck face. “Duck face is the single worst thing you can do. It’s when you look into the camera and stick out your lips. It is deplorable,” Ward cautions. “It is the single most disgusting thing a woman can do. Who are you blowing that kiss to? Any random person who looks at your profile?”

So what should your profile look like? When everyone from your 10-year-old cousin to a potential employer has a Facebook account, striking the right balance between seduction and sophistication in your profile picture is imperative. “You want an attractive, half or full length, photo of yourself that anyone- a boss, a boyfriend- can look at,” Ward preaches.

How to take a Red Carpet Worthy Photo

Ward’s final word on photo editing will come as a chauvinistic shock to most women, especially those of us who think having a cute group of friends is a point of pride. “If there is a more attractive girl than you in a picture, delete it.” I’m sorry, what? “Delete it. All a guy is going to be thinking is, ‘She’s the most unattractive girl in this photo.’” And just in case, like me, you needed to re-read that statement and still think I made a typo, the notorious loud-mouth continued, “No guy wants to walk into a party and go, ‘Hey, this is my girlfriend. She’s the most unattractive person here. And that’s what he’ll be thinking about.” Delete photos with my tall blonde sorority sister: Check.