Listen, I’m cool with my brows. In fact we have a pretty great relationship. I’ve got my beloved Glossier Boy Brow, which fluffs up my eyebrows and darkens them a little without giving me #instagrambrow (you know, those thick, drawn-in brows that look like tiny works of torturous art), and that’s pretty much all I need. So when an email landed in my inbox from celebrity brow maker Piret Aava (also known as the Eyebrow Doctor) inviting me to try microblading—a semi-temporary eyebrow tattoo that makes brows look filled in and shaped 24/7, sans cosmetics—I thought, “Nah, I’m good.” At least, for approximately one day.

Because at first pass, the idea of temporary tattooing reminded me of those women with permanent eyeliner that had faded from black to blue and green after a few years, which was not a look I wanted for my eyebrows. And because the results of microblading can last up to two years, it would be slow torture to deal with a gnarly fade or a heavy-handed treatment. Besides, the treatment tends ring in the neighborhood of $700 to $1,300, a cost which, sure, might eventually offset the time and money you’ll save by not having to fill in your brows everyday, but still—that’s a lot of coin.

She got to work, raking the tiny needles across my skin.

But then I started seeing celebrities with really, really excellent brows extol the wonders of a good microblading. Serena Williams and Malin Akerman have been bladed by Aava, and they look fantastic. Bella Thorne documented her own microblading session on Snapchat, and even with her fair, strawberry-blonde hair and fair complexion, the results looked good, and surprisingly believable. And, hey, if a slew of celebs trust a possibly scary beauty treatment, I guess that’s some sort of vote of confidence, right? And just like that, I RSVPed.

I’ll admit that I was relatively worried the day of the appointment, imagining myself yelping in pain as someone meticulously inked my face. But the appointment was actually much speedier and far less painful than I had prepared for. After I explained (and re-explained) how natural and light I wanted my tattooing to be, Aava massaged a numbing cream over my skin and shaped my brows with Tweezers before drawing an outline around my desired brow shape, like a crime scene of where the body should be. Yes, the look had a certain Divine in Pink Flamingos vibe, but Aava assured me this was just done to keep the tattooing contained.

Then she busted out the blades, a row of nine tiny needles sized like acupuncture pins. After selecting the ink that most closely matched my natural brow color, she got to work, raking the blades across my brows and depositing ink into the hair-like cuts as she worked. I know, it sounds horrible and violent and incredibly painful, but trust me when I say the actual sensation didn’t even make me wince. It truly felt like light finger scratches on my skin. 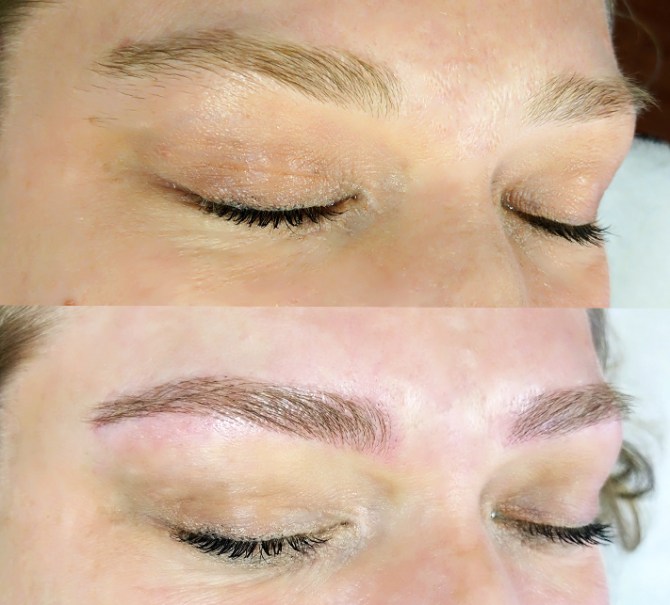 Top: Before; Bottom: After (Photo: Courtesy of Erika Stalder)

After ten quick minutes, Aava announced that she was done and sent me packing with aftercare instructions: Apply a healing ointment for the first two days, and then keep brows dry for a week. That’s it! And despite a row of tiny needles digging into my skin, my brows weren’t even bleeding or too dramatic-looking immediately after. In fact, I headed straight to another meeting without feeling subconscious. And though they did quickly darken to a more intense shade than I was bargaining for, just like Aava said they would, the shade lightened back up after day four. After a week’s time, I absolutely loved the result.

Of course, nothing magical lasts forever, and Aava says that touch-ups may be needed somewhere between six and 12 months time. But for now, my brows are in a perpetual state of well-groomed and perfectly arched. Even with a close inspection, I can’t immediately tell where my actual brow hairs end and the tattooed “hairs” begin. Instead, they look like a makeup artist had her way with them each and every morning, and even my friends are noticing. One even hit me with, “Gurl. Your brows,” delivered with a tone of awe. Translation: Your brows look good, but I’m not quite sure why, which is basically the best compliment I could hope to get. And best of all, I have yet to pick up my beloved Boy Brow or spend literally any time at all on my brows since microblading. So I guess this is goodbye, Boy. (For now.)