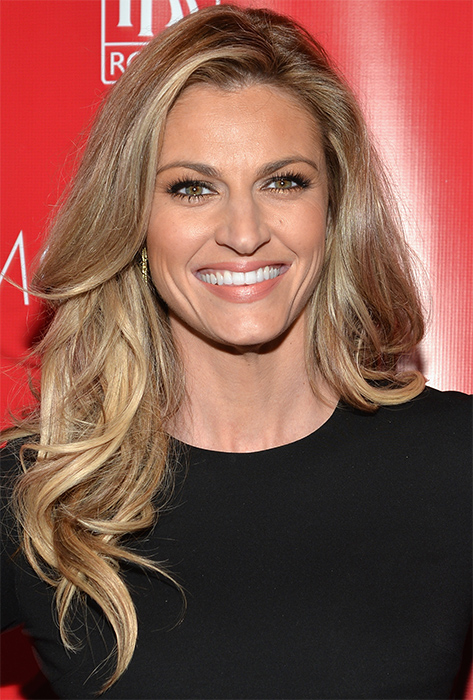 We find it hard to believe that Erin Andrews has ever had a beauty misstep. The stunning sportscaster always looks flawless on camera, which is certainly no easy feat, and this football season she’s adding even more girl power to the game: COVERGIRL has tapped Erin to head up their #GameFace campaign. We got the chance to speak to Erin about her biggest beauty blunder, her on-camera beauty secrets, her BFF Chrissy Teigen, and more.

Despite the fact that her beauty prowess is seemingly untouchable, the TV face learned the hard way (as most of us do) that some things just shouldn’t be put on your face. “I used to do the toothpaste on the zit,” she said, “but then I had the whitening toothpaste that actually ate through my skin. That was really bad.”

Erin definitely knows a lot about sports, which earned her her coveted place in front of the camera on ESPN, but aside from her encyclopedic knowledge and killer interviewing skills, we can’t help but wonder how she always looks so flawless on camera. Her biggest, most crucial tip for looking fresh-faced day in and day out, on camera and off? “Sleep!,” which, she admits, “I don’t get a lot of.” To create the illusion of a well-rested look, Erin loves SK-II Signs Eye Mask ($115, sk-ii.com), which she says “help with the bags and to moisturize, especially when I’m traveling so much.” The eyes have it for Erin’s on-camera look: “That’s where I feel like I look the most tired.” She also wears COVERGIRL LipPerfection Jumbo Gloss Balm in Cocoa Twist ($7.99, covergirl.com), a rosy nude, to every single game.

As with anyone who knows that prevention is the key to anti-aging (and everybody should!), Erin can’t go without her sunscreen. She loves the Elta brand, especially because, as she says, “I grew up in Florida and I definitely created a good amount of sun damage just being a little sun bunny.” In fact, Erin says that good skin care alone is her beauty secret—and not just on her face. “I do a renewal serum every single night, and I’m actually really big on moisturizing [the neck and bust area], which gets really dry from traveling so much and not drinking enough water,” she says, “and I try to be good about moisturizing my hands. I’ve had too many people on my Instagram photos saying my hands look like the lady from ‘Titanic.’”

Obviously, we couldn’t talk to Erin without asking if she swaps beauty tips with her close friend Chrissy Teigen. “I don’t even try,” she laughed. “She’s just ridiculous with her dewy skin. She got me into the SK-II facial essence and the masks. Brooklyn [Decker], Chrissy, and I all text each other pictures in the face masks. We send each other pictures of our zits.” Sports Illustrated models: They’re just like us!

Erin couldn’t be more passionate about—or more personally invested in—the #GameFace program, which is a mission to highlight female sports fans and work some classic COVERGIRL beauty into the mix with 32 fierce looks for repping your home team. As a woman who works in sports, she’s found herself subject to “a lot of criticism about, you know, you’re into looking nice and being fit, and you’re into fashion, or you’re into having a certain look and also the fact that I could actually know or care about sports.” For the record, she thinks it’s ridiculous. “The fact that we’re still talking about that—is it a really crazy thing to be female and love the way you look and love makeup or love fashion and also know football? It’s a no-brainer. It’s 2014, we’ve seen a lot of stuff, and we’re wondering if a female can like makeup and like football at the same time? Is this really happening?”

Of her favorite beauty trend right now, Erin laments, “I wish I could just rock a bob, like Emma Stone‘s new haircut. It’s so cute, but I just know the second I did it I’d start crying and want my extensions back. Actually, I guess I could get them back.” But, she says, “I like ponytails.”