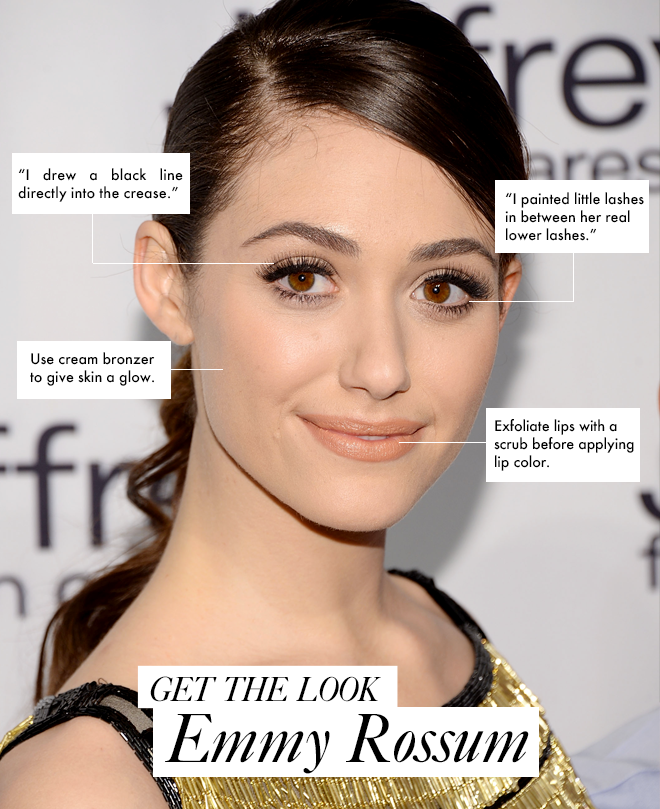 For Emmy Rossum’s red carpet appearance at last night’s Jeffrey Fashion Cares event, “We wanted to do something mod-inspired, a little bit ‘60s,” said her makeup artist Jake Bailey, with “the focus on the skin and the eyes.” If we hadn’t chatted with Bailey about the look, we never would have guessed all the surprising tricks that went into making the Shameless actress glow. Here are a few of our favorites.

Skin
“Emmy has really beautiful skin, which is the key to any successful makeup look,” Bailey said. “I used the Bioré Acne Clearing Scrub [$6.49; drugstores] to slough off any dead skin.” Not that Rossum has acne, but anyone can use the exfoliant because it’s non-drying, Bailey explained. He followed the scrub with a lightweight moisturizer — ”the last thing you want to do is dry out your skin before applying foundation” — then added a lightweight liquid foundation.

On the cheeks, Bailey blended a Chanel cream bronzer to “warm up her complexion without adding too much color” that would compete with the strong eye. “I work primarily with creams as opposed to powders,” he said. “If you’re going to use a powder blush, you have to powder the skin first. But if you want skin to glow, you have to go light on powder.”

Eyes
To create a modern ‘60s vibe, “We did a really rich, dark strip of lashes,” Bailey said. “For the eyeliner, which was really the key to the look, I did a subtle winged line along the lash line.”

The cut crease is a hallmark of mod makeup, so Bailey integrated that into Rossum’s look: “I actually drew a black line directly into the crease of her eye,” he said. To get the line in the right place, he first applied a soft brown powder shadow in the crease the create a “stencil,” then used an angled brush to paint a “very sharp black line” with waterproof cream liner. “A waterproof liner won’t budge.”

Another ‘60s-inspired trick Bailey used? Twiggy lashes. “Using a small angled brush and the same cream eye liner, I painted little lashes in between her real lower lashes to create that false lash effect,” he said.

Lips
“I love nude lips but I avoid a straight nude for the red carpet, because when you’re dealing with flash, that can wash you out,” Bailey said. Instead, he chose Nars Satin Lip Pencil in Floralies ($25, narscosmetics.com), a “coral-y nude” to warm up Emmy’s complexion.

Bailey’s trick to perfectly smooth lips is the same Bioré scrub he uses on the complexion; he’ll exfoliate lips and coat them with lip balm before beginning any makeup look. “By the time I get to the lips — they’re almost always last — they’re perfectly primed for the lip color.”