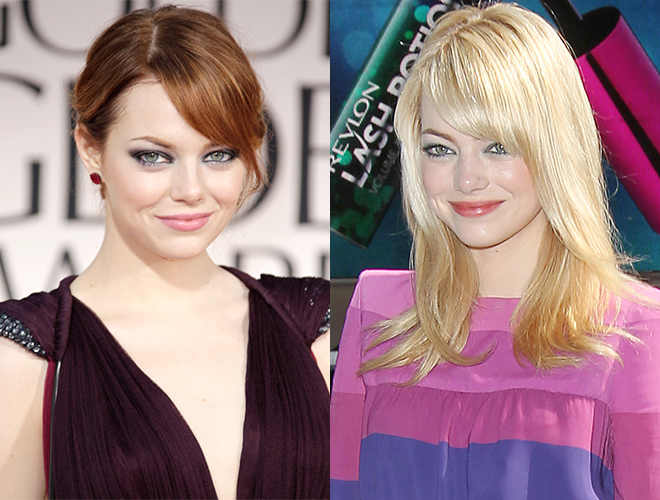 I can’t think of a single female who doesn’t like Emma Stone. She’s funny, talented and seems like a real girl’s girl. I had the chance to interview her at the launch of Revlon‘s newest mascara, Lash Potion (she stars in the product’s ads) and it turns out she’s just as cool as she seems (phew!).

Since she’s one of the few people for whom both red and blonde hair flatter (I might actually hate her if she wasn’t so nice), I wanted to know which hair color Emma feels most comfortable in.“Probably red, even though I’m blonde naturally,” she said. “I identify most with red hair. My mom’s a redhead, so maybe I grew up seeing it more than seeing myself in a mirror. But I like blonde, too. It’s just hair.”

And which do the men in her life prefer? “I have no idea. I have this with ailments, as well. ‘Oh, I’m feeling lethargic. Could it be that I ate this or that I drank too much coffee?’ I never know specifically what’s causing my ailment. I think I feel the same way with men. I don’t know what specifically is drawing them. I don’t know if it’s hair, but God they’re just so drawn to me!” she says in a dramatic voice.

Although the Gangster Squad actress is a Revlon spokesperson, she’s the first to tell you that she’s tried a lot of beauty trends that she’s now come to regret.

“I look back at my prom pictures and it’s like raccoon eyes,” Emma says. “I had a lot of black eye shadow, like a lot. Like from here [eye lid] to here [brow bone] and here [her lower lash line].” She also admits to wearing acrylic nails for many years and getting way too many spray tans.

These days Emma (like many celebrities) has her pick of any beauty products she wants to try, but unfortunately she isn’t able to indulge in most of them. “I’m really allergic to a lot of stuff, so I can really only use products with one thing in them. So I use Burt’s Bees cleanser and sometimes I exfoliate with baking soda or brown sugar. I like coconut oil. I use the Josie Maran argan oil and olive oil — I have a big bottle of olive oil on my sink. So I just put it on my face, and I smell like focaccia. And it’s really sexy,” she jokes.

When it comes to beauty, Emma seems far less concerned with what’s on the outside than the inside. Not only does she not care what kind of makeup guys like on her, but she tries to focus on the important things in life. “My best friend and I have this saying. We just say ‘bones.’ Because I went to the Catacombs and I realized all these people in catacombs were all trying to be liked by each other, to be successful, to climb the ladder or whatever, and they are literally stacked on top of each other in catacombs. They’re back to bones. Whenever you lose perspective, you just realize we’re all bones trying to get along. We’re all the exact same at our core. It helps put things in perspective.”