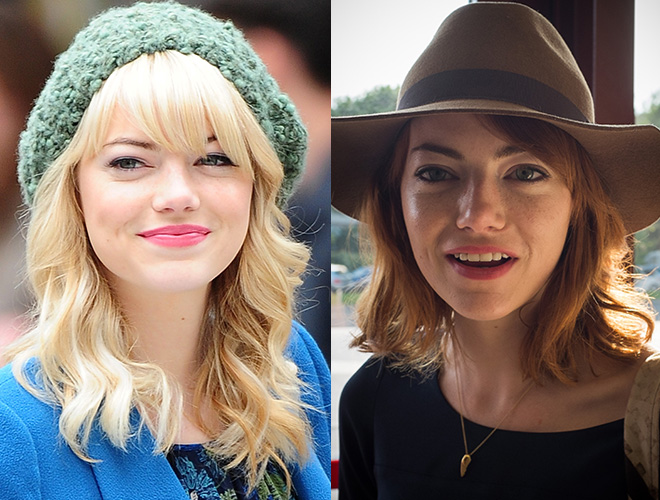 BEFORE: Emma Stone filmed The Amazing Spiderman 2 as a blonde (left); AFTER: Stone is back to red hair.
Photos: Getty Images

Emma Stone is a redhead again, and she’s chopped off a few inches in the process! The star stepped out with a new hairstyle yesterday to join boyfriend Andrew Garfield at a Woody Allen live performance in Antibes, France.

Stone had been previously spotted with a new red hair color shortly after wrapping The Amazing Spiderman 2, in which she plays a blonde Gwen Stacy, but these are the first photos that give us a good look at her new hue. Her shoulder-length hairstyle places her firmly in lob (“long bob“) territory, just like Jennifer Lawrence and Nicole Richie, who’ve also made the cut recently.

We’re not surprised Stone chose to return to life as a redhead after her stint as a blonde. A few months ago, the actress and Revlon spokesperson told us that she actually prefers her hair red. “I identify most with red hair. My mom’s a redhead, so maybe I grew up seeing it more than seeing myself in a mirror,” she said.

What do you think of Emma Stone’s new hair?