Emily Ratajkowski is no stranger to controversy. The model continues to use her platform to speak out about gender equality and feminist issues, including abortion access and body autonomy—as is her right to do. Also her right? To shave or not to shave. Ratajkowski recently wrote an essay in Harper’s Bazaar about what it means to be “hyper-feminine” and how women deserve to be treated with respect, however they choose to present to the world. The accompanying photo shows Ratajkowski in a black lace bra with her arms above her head, proudly showing off armpit hair. And people have a lot of feelings about it.

She shared the photo on Instagram, writing: ‘”Give women the opportunity to be whatever they want and as multifaceted as they can be.’ I wrote an essay for @harpersbazaarus about the importance of women’s right to choose (how she dresses, what she posts, if she decides to shave or not) no matter what influences have shaped the way she presents herself.” 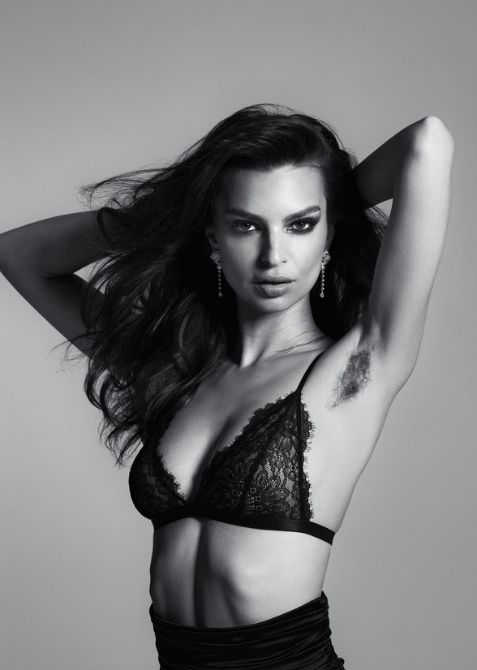 Most praised the model for showing that so many people decide not to shave a part of their body and that’s totally fine and their choice. Not to mention, it has literally nothing to do with hygiene.  “You. Are. Freaking. Awesome.” wrote Ashley Graham. Others though accused Ratajkowski, or the magazine, of adding hair or making her underarms look darker. “I think they have been editing this photo to make it look like you have more hair. 🙄,” wrote iconic model Lindsey Wixson-Young. Commenters pointed out that other photos of Ratajkowski show she does, in fact, shave. But isn’t that exactly what she’s saying in this essay? That she can choose to remove her hair when and how she wants, if she wants. There’s also the fact that Ratajkowski is typically beautiful and has the privilege of looking like a supermodel even while rocking something people think is “unattractive.”

But it’s like she says in her story. She’s aware of what she’s doing. She knows how she looks and how she portrays herself to the world. She says in the essay: “Sure, I’m positive that most of my early adventures investigating what it meant to be a girl were heavily influenced by misogynistic culture. Hell, I’m also positive that many of the ways I continue to be ‘sexy’ are heavily influenced by misogyny. But it feels good to me, and it’s my damn choice, right?” That it is.