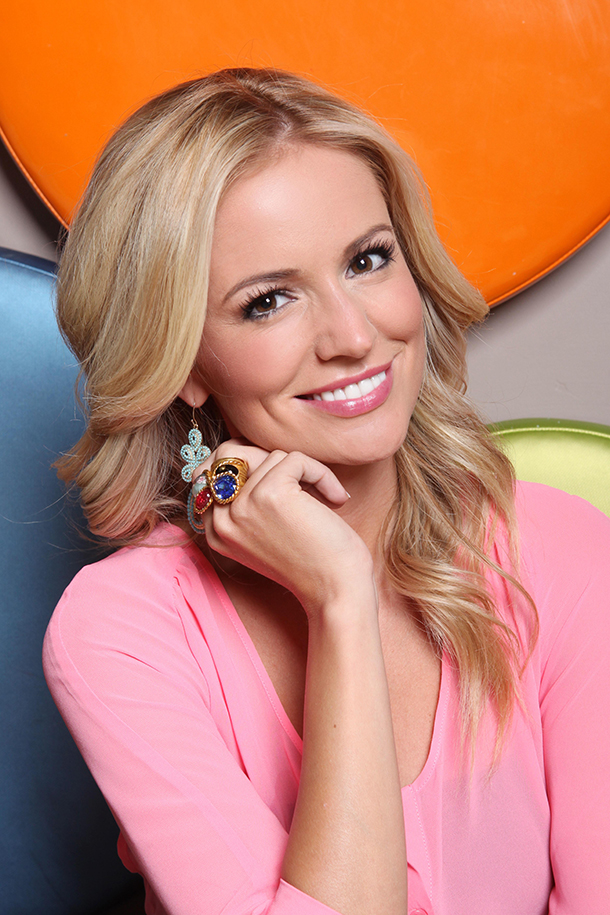 You don’t have to be a fan of The Bachelor or The Bachelorette to know who Emily Maynard is. If you’ve turned on the TV or opened up any magazine within the past few years, you’re probably well aware of Maynard’s quest for love on the reality show and its spinoff. And if you’re as obsessed with great beauty looks—like us—you’re also well aware that Maynard has a good one. Namely those soft Southern belle waves and that flawless complexion. Just in time for the launch of her first book, I Said Yes: My Story of Heartbreak, Redemption, and True Love ($17, amazon.com
, which chronicles her struggle with loss, her search for love, and her embarrassment from the roller coaster that is The Bachelor(ette), we chatted with the star to get her top beauty tricks and picks and the secret to those flowing locks.

So I read on your blog you ditched your hair extensions, but you have such nice hair! What’s your secret?
Emily Maynard: Thank you! Well honestly I got bangs a while ago, and they were terrible, horrible. Imagine the worst bangs you’ve ever seen and mine were worse. I mean it was terrible. I think it’s like a right of passage for women to go through a terrible haircut and that was mine. And so I researched every kind of hair vitamin or what I could do to make my hair grow faster, and I found these hair vitamins on Amazon. They’re called It Works Hair Skin and Nails ($60, amazon.com) and my hair grew, I swear like two inches in a month. My husband even noticed, he doesn’t notice anything.

Oh wow, they must work then.
It’s insane. I bought it in bulk. I give it to my friends if they’re trying to grow their hair out. I know people who had to stop [taking them] because they’d have to get their hair colored too often because their roots were growing out too much.

So what about those fantastic waves? What’s the secret to those?
Well I try not to use too much heat on my hair. I have straight hair as it is, so I’ll just put my hair in a bun or a braid whenever I get out of the shower—and just because I’m kinda lazy these days. I hate drying it. I think everybody does. So I’ll just let it air dry, and then the next day I’ll just run a curling iron through it or something. But I always like second day hair better anyway. I just think it’s a better wave than a curl. Just brush through it and it’s more of a wave.

Did you learn any cool tricks from being on The Bachelor and The Bachelorette?
So the show’s makeup artist her name is Gina [Modica], and she’s awesome. She would do my makeup for rose ceremonies but the rest of the time, you’re on your own. She would use the Temptu Airbrush Makeup ($240, temptu.com) on me sometimes, and I really like that because it’s waterproof. I remember we went repelling down a waterfall or something…

As one does…
Yeah, of course! And everybody’s makeup was craz,y and they all thought I had a powder in my pocket book or life jacket pocket or something because my makeup was still perfect. It really works.

So if you’ve got 5 minutes to spare these days, what are you reaching for?
I love the Eve Lom Tinted Moisturizer ($55, neimanmarcus.com), the Armani Eyes to Kill Mascara ($32, sephora.com)—that’s my favorite right now. Becca makes a really good highlighter and probably Nars Blush in Gaitey ($30, sephora.com). It looks like an obnoxious Barbie pink in the compact but it looks really pretty on.