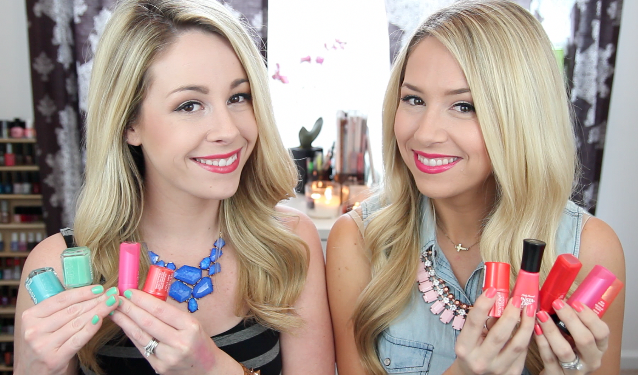 Tracy and Stefanie of EleventhGorgeous

For some people, going into business with your family can get tricky. Disagreements can happen and visions can be on opposite ends of the spectrum, which can make the idea of running a company with a family member daunting. Two ladies who have it mastered, though? Tracy and Stefanie of EleventhGorgeous, the YouTube channel with nearly 900,000 subscribers and hundreds of thousands of views. Hailing from Alabama, the sisters started making YouTube videos five years ago and have since become some of the most popular personalities on YouTube, even going so far as to score a campaign with CoverGirl.

Besides being one of the most fun duos to watch on the ‘Tube, Tracy and Stefanie have their hair and makeup skills down pat. From makeup tutorials to hauls to Q&A’s, the EleventhGorgeous ladies leave no stone unturned. As much as we love their channel, we wanted to get to know the girls off-camera, and what better time than Vlogger Month to sit down with Tracy and Stefanie? We talked bloopers, weird comments, favorite playlists, and a slew of other fun topics their fans haven’t seen. Read on below!

Beauty High: Considering the amount of comments you get, there must be some weird that comes with the good. What’s the strangest comment you’ve gotten?
EleventhGorgeous: For us, we feel lucky that we don’t get too weird of comments, but to this day it’s funny that people either think we’re twins, or they see almost no relation in us at all. People always ask if we’re twins. Then, we’ll have people who will say they look nothing alike. We don’t make it easy, though, because a lot of the time we shop together and we’re buying the same clothing, same accessories, and we paint our nails identical.

Has there been a video when you’re aiming for a certain look, and then things just don’t go as planned (i.e. horribly wrong)?
The first thing we can think of is last year, when we did a video on 4th of July outfits and we lived in Alabama. It’s humid there and common to be in the 100s. It’s so hot. We’re not sure what we were thinking. We were going to do a look book with balloons, and a cute video. We were sweating, the balloons disappeared into the sky, and the look book was sort of okay, but we only had one outfit each instead of two to three, and then the bloopers. There were so many funny moments from that. Now we don’t do outdoor look books during the summer.

What usually gets cut from the videos?
Bloopers. We don’t do enough of the bloopers, but we don’t actually cut a lot of the funny stuff on the videos. “Throw it on the ground” became a thing that people say. Like we’ll drop something during a video and we started saying “throw it on the ground!” and now our fans have made it a saying. We’re not perfect. We’re just having fun.

One of your recent videos, “Naked and Afraid,” featured the two of you without any makeup on. What made you afraid about the video, and do you feel more confident now that you’ve done it?
It’s funny, because the more we’ve discovered and played with makeup, the more comfortable we feel without makeup. We seemed so confident based on the comments we were getting — people kept mentioning how confident we seemed — and I really didn’t think twice during the actual video. But honestly, we were just down at breakfast in our hotel, and a couple girls recognized us. Two girls saw us without makeup, and sometimes we’re not motivated enough to put on a full face. Sometimes we venture out completely bare faced.

When people started recognizing you out in public, did you start to put more effort into what you looked like going out for errands?
Target’s our favorite place to shop, and we used to go in our pajamas. People took pictures with us in our candy cane pajamas. So we got to the point where we were like, “we better not.”

Okay, now for the fun things. Which of you wins for best cat eye makeup skills?
A lot of times we look at each other and like [the other’s makeup] more, and I’ll look at Tracy and look at her wings, and think “her wings look really good.” The cat eye is not working today, though! It’s whenever we’re going somewhere important we can’t do it – but it’s always perfect at the grocery store.

Would you rather lose your cell phone or your makeup bag?
I think I’d rather lose my makeup bag. My phone has all my photos and memories, and I’m so bad about backing them up. We like a lot of affordable makeup brands so it wouldn’t be too costly to replace.

Speaking of brands, which are your favorites?
For mascara and foundation COVERGIRL, for eyeliner Jordana. Wet N’ Wild has great blushes, and as for eyeshadows we’re usually going for higher end. We love palettes, like Urban Decay and Too Faced. Nail polish we usually do Essie, but right now [in our hotel] we have 10 different nail polishes and we’re only here for four days. We have three colors each on our nails. There’s a lot of nail polish and not enough opportunities.

MORE: Nicole Guerriero Talks YouTube as a Career, Her Weirdest Comments, and More

Take your best guess on how many nail polishes you own.
Combined, probably 1,000 bottles of nail polish. We could open a nail salon. We haven’t noticed any polishes that are like, “this is too old to use,” and we like our nail polish.

What are three things your viewers don’t know about you?
We recently discovered Stefanie can juggle. We were shooting a commercial and they wanted us to juggle oranges, and I [Stefanie] had never done it but I just tried, and it wasn’t great but I got a few rounds in and then I dropped them. Tracy was way into video games and played World of Warcraft for three years. We’re a little bit nerdy, we like video games, and if you catch us on an off day we’d be happy to go to Target in pajama pants. I [Tracy] was in marching band in high school. If I could just play in concert bands just on the weekends, I would love that. There’s something so cool about being in a band and coming together for music.

Speaking of music, do you guys typically work with a specific playlist?
We’re really enjoying Lorde right now, and if we could have a soundtrack for us walking around, it would be Lorde. Typically we listen to Top 40 and make a playlist of the moment when we go on trips. We’ll have 10-12 songs that are popular happening on the list.

What’s the best beauty advice you’ve ever gotten?
It’s funny, we never got a lot of advice from our mom because she always said less is more. Honestly, it’s affordability. You don’t have to buy the most expensive products to look great. You don’t have to break the bank to look amazing. Less is more, because sometimes it is better.

Want more EleventhGorgeous? Head over to their YouTube channel!