Growing up, I had very little knowledge about health insurance beyond its conceptual existence—until, that is, I became ill with anorexia at 19 and desperately needed treatment. It was then that I realized my life was literally at the hands of a middle-aged insurance dude in Minnesota or wherever, who knew nothing about eating disorders and like Regina George, was a life-ruiner. (OK fine, maybe he didn’t create the policy that insurance companies can deny you coverage for not being underweight enough, or because you don’t have enough medical complications—but alas.) Thankfully, I’m in recovery now, but only because I’ve been fortunate enough to have the resources to access specialized, intensive treatment. Had I relied on insurance alone, though, I wouldn’t have gotten adequate help and probably wouldn’t be here today.

Eating disorders have the highest mortality rate of any psychiatric illness, claiming the lives of up to 20 percent of those who suffer, usually through cardiac complications or suicide. But despite the staggering 30 million Americans who are affected by these illnesses, only 10 percent ever receive treatment due to a lack of, or insufficient, insurance coverage–something that will forever blow my mind.

Commonly, insurance companies will deny coverage for, yes, the fact that your weight isn’t low enough, or because you’ve been deemed chronic. You read that correctly: Medical necessity for an eating disorder, a primarily mental illness, is largely determined by physical symptoms—which are only the tip of the iceberg. But by the time a person gets to the point where intensive treatment starts, it’s often a life-or-death situation. And since treatment for an eating disorder is exorbitantly expensive, costing upwards of $30,000 per month for some, it’s not uncommon for families to drain their retirement savings or have to take out a second mortgage for the sake of saving the life of their loved one. Not a perfect system—or really, even a good one.

In response to this crisis, provisions from the Anna Westin Act were signed into law as part of the 21st Century Cures Act in late 2016. Named after a young woman who died from anorexia after insurance denied her coverage, it is designed specifically to help those affected by eating disorders get the care they need, and was the inaugural time Congress passed an eating disorder-specific legislation.

MORE: The Moment I Knew I Needed Help for an Eating Disorder

Despite these recent strides, however, eating disorders continue to be both incredibly stigmatized and grossly underfunded (recent statistics show that federal funding allots only $0.93 research dollars per affected individual), and it’s unsettling to consider what might ultimately happen to an already broken system with the uncertain fate of healthcare in the United States. But, two young women are taking the future of eating disorder treatment into their own hands after personally experiencing the inconsistencies of mental health parity. 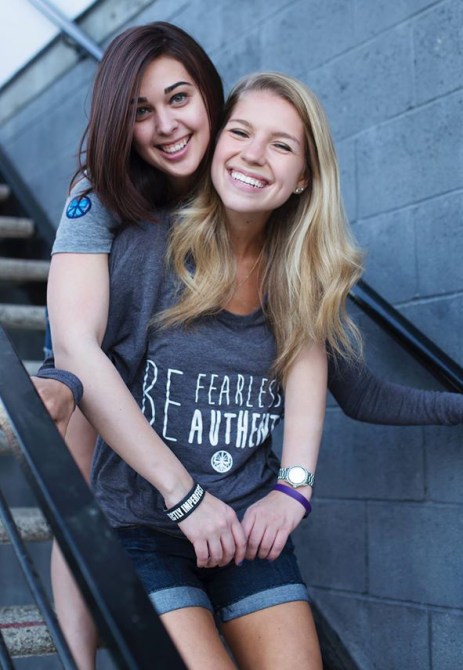 After meeting in treatment as teenagers and helping one another to fully recover from anorexia nervosa, Liana Rosenman, 25, and Kristina Saffran, 24 (pictured above), founded Project HEAL (Help to Eat, Accept, and Live) in 2008. They were fortunate to have families who could pay for what insurance wouldn’t cover, but knew this put them in the minority, and wanted to do something to help. Less than a decade later, Project HEAL is now the largest nonprofit in the country delivering prevention, treatment financing, and recovery support for people suffering from eating disorders.

“I didn’t think recovery was possible and I had many lapses along the way,” said Saffran, a recent Harvard graduate who now serves as the organization’s CEO. “But I was lucky, with an awesome support group, top-class treatment and frankly, a great insurance plan, I got there. Full recovery from this disease is possible. That said, the journey that enabled me to get my life back cost upwards of $200,000—something that most Americans simply cannot afford.”

Since its inception, Project HEAL has awarded 72 treatment grants with funds raised through annual galas, donations, and their 40+ chapters across the country and internationally that regularly hold smaller-scale events, like bake sales and yoga classes. Recently, the organization expanded its mission to include evidence-based community support groups facilitated by recovered mentors in the New York City and Philadelphia areas.

MORE: 6 Ways to Help a Friend with an Eating Disorder

“When I was battling my eating disorder, I never believed recovery was possible,” said Rosenman, who teaches at a New York City public school in addition to running Project HEAL. “I needed someone who had been in my shoes and who could listen and guide me as I navigated the road to recovery. It is so important for those in recovery to have a mentor to prove that it is possible to overcome and that a healthy, happy life is in reach.”

Unlike many other diseases, there’s an active choice involved in eating disorder recovery—but one can’t make that choice without the proper tools and support to do so. Project HEAL works to alleviate any obstacle that might prevent a person from taking the necessary steps toward recovery, even going so far as providing new clothing for those who must restore weight in treatment, and assisting with rent and dog-boarding fees (!) while in treatment.

Ultimately, Rosenman says, the goal for Project HEAL is to roll-out peer-led support groups and one-on-one mentorships in every state nationwide in an effort to strengthen lower levels of care and prevent the need for further treatment and avoid insurance issues altogether.

For more information, or to apply for a treatment grant, visit theprojectheal.org.