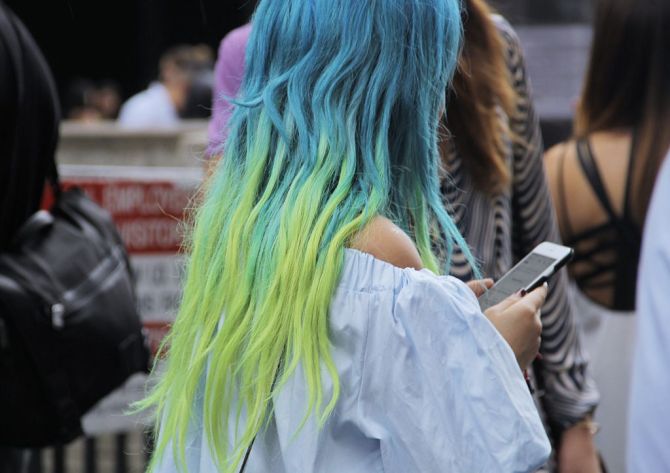 Lately, there’s been a lot of articles circulating about the various reasons why you should never attempt to dye your hair at home. It’ll fall out. You’ll destroy the integrity of each strand. You don’t know what you’re doing and boxed color is evil. While I can understand why these types of stories are written (everybody needs a job, colorists included), I completely disagree.

I’ve been coloring my hair in my own kitchen since I turned 10 years old (with the help of my mother, who has no professional training, I might add.) With the exception of a few visits to the salon as gifts or as a writer testing out a new service, I’ve been tending to my own color for 13 years and nothing bad has ever happened. And I’m talking real color: I’ve had red, blue, purple, green, pink, black, brown, blonde, black, platinum, grey and rainbow hair, all done myself.

My affinity for DIY color starts with the fact that the few times I’ve gone to the salon to get my hair dyed or bleached, I’ve felt like I had to work overtime to convince the stylist to give me what I want. I ask for one thing, and they try to change my mind or tell me it’s wrong. There’s also been a fair share of scolding on the part of colorists. It’s like they’re angry that I’ve been able to successfully do my hair at home without screwing it up.

Then there’s the issue of price. Once, when I asked a colorist who had done a friend’s hair how much they’d charge to take me from a deep reddish purple to platinum blonde, they told me I’d have to shell out $500 an hour because they considered it a “color correction.” Not because I’d come in with bad hair (that hair color actually scored more compliments that any other color I’ve tried), but because I’d applied the color myself.

When I declined to make an appointment at that price, and told them I’d do it myself, they scoffed that my hair would be ruined, but I pulled off the color transformation using powder lightener from Wella, a 40 volume developer, a dye additive hilariously called Unred, a pair of gloves, plastic bowl, dye brush applicator and finally–my choice of toner or color to go on top. All in, the whole thing cost about $60, after purchasing some Kerastase repair treatments for my newly iced strands, and my hair felt and looked strong and healthy.

Before and after photos of one of my DIY color jobs: from purple to platinum, with a shorter ‘do.

To me, a hair colorist telling someone they shouldn’t dye their hair at home is like a chef telling people they shouldn’t attempt to cook in their own kitchen, but at least chefs encourage us by releasing cookbooks and going on TV to teach us recipes.

Some argue that it’s all chemicals and common person won’t know what they’re doing, but if you’re willing to do some homework, there are a million resources: YouTube, Instagram, and beauty blogs are just a few spots that are packed with advice on how to properly color your own hair. Before I started dabbling in extreme shades like pink and blue, I definitely watched over 100 YouTube tutorials, Googled what seemed like every available article, and carefully studied different swatches from various brands on Pinterest.

The last time I went to a colorist for a story I was working on this fall, I’ll admit the result was great. But the process wasn’t. I came into the salon with pastel pink locks and requested a dark green with brown roots—very ’90s grunge. Immediately, the stylist tried to convince me to go purple. Not because it would look better, but because she thought it would be too damaging because of the difference in warm to cool tones. She told me that my hair wouldn’t be able to handle the stress of the bleach.

When I asked her what kind she’d be using, I realized that it was only half as strong as the stuff I use at home (on a regular basis, maybe once every six weeks). I felt like I had to coax her into doing her job by telling her it would be OK, that my hair would be be able to handle it, and that everything would work out. And it did.

I do respect the unique vision that some talented colorists have and follow more than a few on Instagram for inspiration. These superstar colorists like Alex Brownsell of Bleach London (responsible for the plethora of cool girls’ hair like Rihanna and Sky Ferreira) and Aura Friedman at Sally Hershberger have a voice, and they’re incredibly influential when it comes to setting the trend as far as unique color goes. But for now, I’ll take their inspiring Instagram snaps as my main point of contact and continue doing my hair myself. It just works.

If you’re interested in trying to DIY dye at home, towels are your best friend–because there is a great possibility of destroying your bathroom or kitchen. And if you’re attempting a drastic change in color, I recommend shampooing with a cheap dish soap full of sulfates (yes really!) for a few days to pull out any existing color. In between washes, I suggest warming up a few tablespoons of olive oil (oil also will pull out pigments while adding moisture) in the microwave and leave it one for an hour or so. Of course, there’s also boxed hair dye removers that can work, depending on the color.

One of my favorite resources are beauty supply stores like Ricky’s and Sally’s where the employees also usually are on board with DIY dye jobs and can easily dispense advice. But YouTube is also great–with popular bloggers documenting what works in real time. The most important thing to remember is that it’s just hair. If you don’t get what you want immediately, you can always try again.

It’s not for everyone: sometimes the process will take multiple days— even colorists at the salon will break up an intense process into different sessions. In the end though, it’s worth it for those of us who live for the thrill of going from purple to platinum in 24 hours.