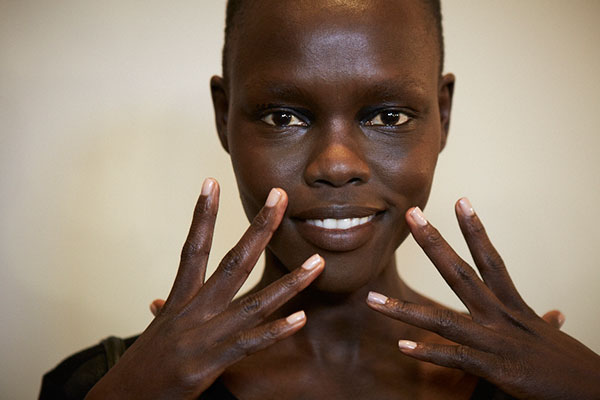 Nudes, pale pinks, creamy whites, and barely-there hues, yet again, ranked in popularity on the Fall/Winter 2015 runways, proving that the trend that has yet to slow down since it started to appear on just about everyone’s finger tips early last year. Elongating your fingers and even providing you with an existing base coat if you decide to change to a darker hue on a whim, these lacquer shades have arguable benefits. Let’s face it—what neutrals lack in pizazz, they make up for in versatility and transition. Still, it’s easy to get bored with this shade, as it doesn’t have the same allure or history as a ruby red polish.

Another con that we hate to admit? The flaws of a poorly painted or groomed nude manicure could be even more visible than it’s darker counterpart. So this color palette might be sticking around for a bit, but there’s no reason to get bored. Take a look at the tips below for a few quick ways to not only dress up the nude manicure trend but also to keep it looking it’s absolute best.

First step? Groom
Keeping your cuticles looking neat and clean is always important, but it becomes even more of an issue with a neutral-hued or nude manicure. “If your cuticle is really dirty or dry, it doesn’t look good. It doesn’t look like you got a manicure,” explains celebrity manicurist Jin Soon who is a regular backstage during New York Fashion Week and created countless neutral looks this season. She notes that with darker colors, managing shape and a bit of cuticle oil can mask problems pretty well, but with a nude color, since there isn’t much to pop to begin with, a dirty or dry cuticle and a misshaped nail really shows. Make sure you groom your cuticles and apply cuticle oil (try a product like Deborah Lippmann’s The Cure) and keep your nails relatively short with a buff, natural look.

Go for a Half Moon
If you like nail art in it’s most subtle form, try painting on a half-moon to your nude manicure. Backstage at Diane Von Furstenberg’s New York Fashion Week show, manicurist Michelle Saunders painted models hands with a base coat before highlighting the semi-circle shape at the bottom of the nail bed with essie’s sheer, creamy white, “waltz.” Worried you won’t be able to stay in the lines? Saunders suggests painting on the polish and then taking a clean, angled brush dipped in polish remover and removing the color outside of the lines. She says you can also use tape or a sticker if you’re worried about it getting messy.

Try a French Manicure
You can create what manicurist Julie Kandalec calls a “modern French manicure” by picking an extremely pale shade and painting it on top of your nail without adding in a white tip. Your white free edge will act as a subtle version of that classic exaggerated tip. She debuted this look backstage at the Altuzarra New York Fashion Week show. However, if you do want to try a white tip, you’re going to want to keep it clean. To do this, Kandalec suggests moving very quickly with your sheer white polish over the tip and moving from left to right. You’ll get a better line if you move faster rather than slower.

Stick on Studs
Those that want a little more glam without the pain of removing glitter should reach for jewels or stick-on studs. Paint on two coats of your desired shade and before the coats completely dry, carefully add on a few studs using a toothpick or an extremely thin paintbrush. This pretty look was demonstrated at the Fall/Winter 2015 Jenny Packham show.

Create an Ombred Color Palette
Instead of picking just one nude or light color, sponge on two or three neutral hues in an ombre gradient, making sure to sponge with less lacquer in the areas where they connect.

Geometric Stripes
Paint on a thin stripe of glitter polish over a nude or barely-there polish hue like the models at the Fall/Winter 2015 Delpozo show debuted. Because manicurist Julie Kandalec chose a clear matte color, this decoration created a negative space effect. In order to give that thin stripe of glitter an extra pop of shine, Kandalec painted a stripe of essie’s top coat, “second shine around” on top.