Update May 23, 2022: It’s here! Shop CHROMADDICTION eye paints and liners, face gems, GLITTERPILL long-wearing glitter and so much more at Half Magic Beauty.

Gossip Girl (the original) made us all dress as if we lived on the Upper East Side. Sex and the City (again, the original) made the women of NYC have more fun with fashion. The OC tricked us into thinking the SoCal style worked in our hometown. TV shows can have a big impact on popular fashion. When it comes to beauty, very few have had a bigger impact than HBO’s Euphoria. It makes perfect sense its lead makeup artist Donni Davy would start her own beauty brand, Half Magic.

Davy been delivering creative, high-impact and thoughtful makeup looks over the two seasons, amassing the type of fans who usually just follow the show’s big stars. Davy is now a star herself with more than 500k followers on Instagram. Now, whenever I wear a fantastical makeup look with bright color or glitter or glue-on crystals, I’m told I have “Euphoria vibes.” And I’m way older than any of the show’s stars. It’s truly taken over.

But Half Magic isn’t just a one-off for Euphoria fans who want to recreate Davy’s most popular looks. You can do that now just by following her on Instagram. Half Magic is Davy’s baby that’s been in the works for more than two years and is set to be a full-fledged beauty brand. “It is coming from this Euphoria universe, but it’s not just for Euphoria makeup fans,” Davy tells STYLECASTER. “You don’t have to have seen the show. It’s not Euphoria makeup brand.” She swears she wasn’t even thinking of the show’s characters while she was creating the products. 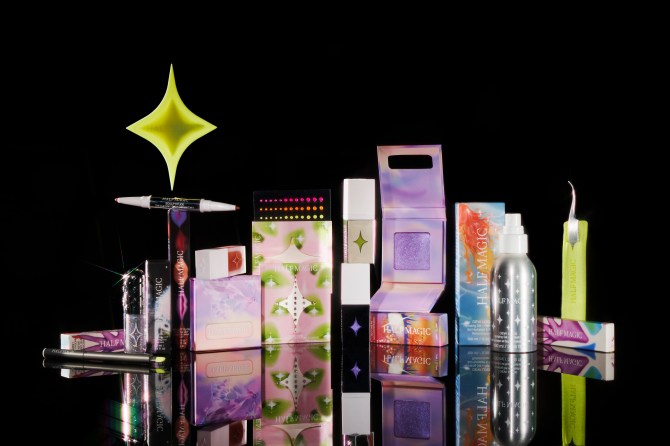 “I’m thinking about people who want to wear makeup who might be intimidated by bright colors, but who want to dabble,” she says. “I was also thinking about pro makeup artists like myself and really wanting to make formulas that they would hold up and that pro makeup artists would be excited to have in their kit and things that I wished existed.” She set out to make formulas “layerable” with multi-dimensional shimmer and sparkle that truly lasts the whole day.

But if you’re not a fan of bright makeup, Half Magic is still for you. There will be more neutral shades, too. “It’s not a cool girl or a cool kid brand,” Davy says. “It’s not just for people who want to be edgy or bold.” Even the packaging is designed to be welcoming and fun.

Davy thought about doing a quick makeup collaboration that would be released in just a few months but decided against it to have creative control. “I knew that a makeup line from scratch would take like a couple of years,” she says. “What I really wanted to do was create the products from the ground up, start small, not go into an existing brand that already has all this infrastructure.”

Instead, Davy wanted to make creative decisions on her own, “everything from formula to packaging to brand ethos.” The first Half Magic drop will be focused on the eyes with a “couple of exciting non-eye products,” as well, she says. The hero product is called Chrome Addiction. It comes in several different finishes, including shimmer, of course. She’s been using some lab samples on the characters of Euphoria throughout season 2, so if you’ve been watching closely, you’ve had a sneak peek.

This first drop will be in May with many more launches to come. “We want to build a full brand,” Davy says. She’ll be listening to feedback from customers and wants to connect with fans and other makeup lovers so each launch is truly intentional. “My biggest goal with the brand, and something I’ve made really clear with my co-founders who’ve been supportive from the beginning was, I don’t ever want to be in the position where I need to release the product because someone’s telling me I have to,” she says. “I need to really think long and hard about what I want in one of those products and how I would make it different than what’s out there and how I would go about dreaming up something that I think is worthy for someone to spend money on.”