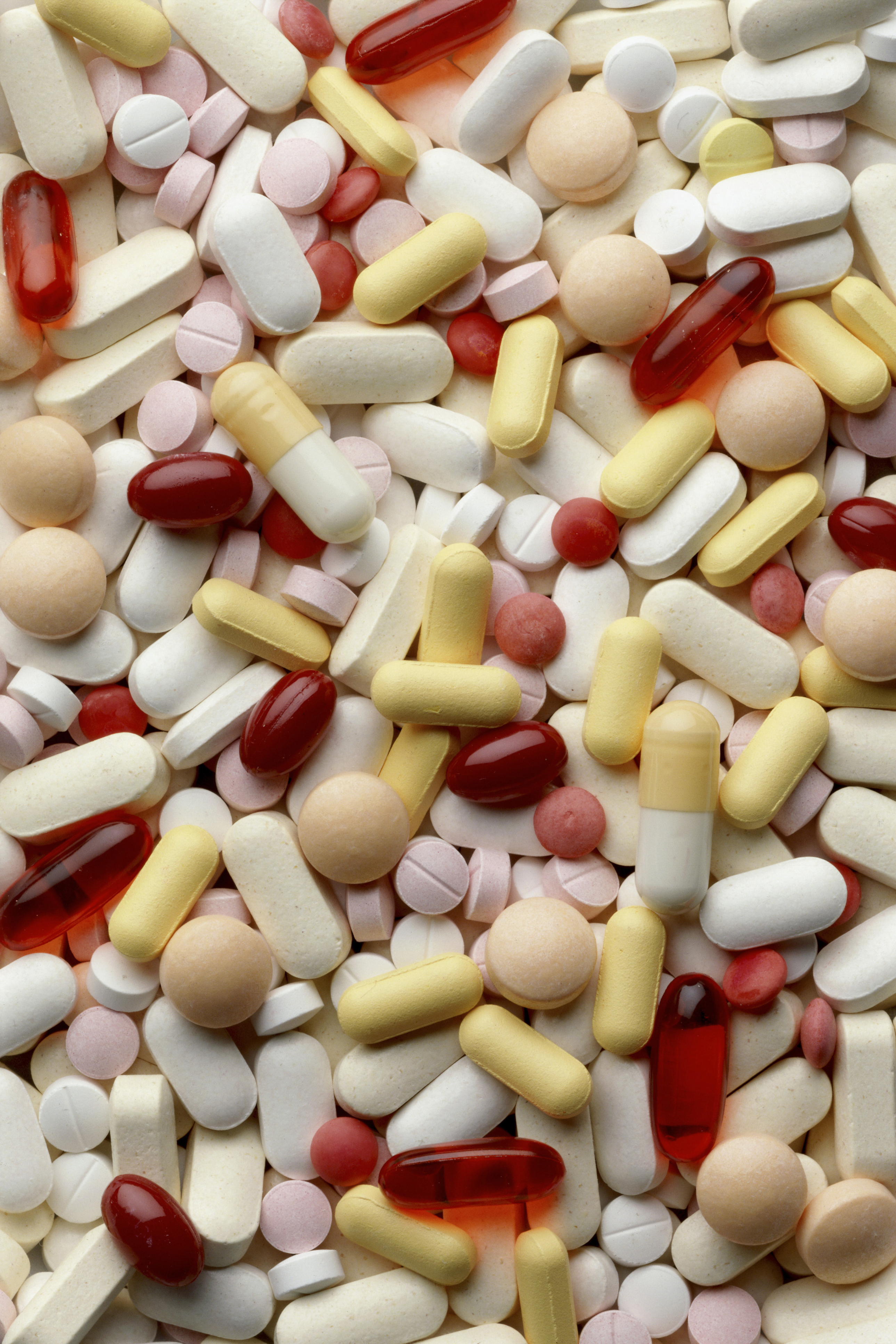 The world of supplements is a vast one, and the more we learn, the more we realize there’s a lot more to taking vitamins than just deciding you want longer hair or glowing skin. These days, it’s easy enough to self-diagnose with the web and decide on which supplements you should be taking, but it’s important to really do your homework. As easy as it may be to start taking supplements, you can just as quickly overdo it.

To get the scoop on dietary supplements — and particularly how young women should or shouldn’t be using them — we sat down with Dr. Florence Comite, endocrinologist and founder of Comite MD, and Steven Michael Villagomez, an exercise physiologist. While chatting about the new Nature’s Origin line of GMO- and gluten-free dietary supplements, they let us in on some little known but all-too-important information about supplements.

Why Our Bodies Actually Need Supplements:

Dr. Florence Comite: “Several years ago, my son had a food disorder. Supplements used to be something you hid in closets. But they’re on a spectrum. We can’t get what we need nutrient-wise from food. We don’t live on the soil, the soil isn’t healthy enough in today’s world. So I started researching, and I have patients who want the purest supplements. The real limit in supplements is in sourcing. Every week I get a new email saying, “this one has something in it, this one has toxins in it.” We test patients before we put them on anything. Almost every patient is nutrient poor and it effects their health dramatically. Then when we improve their health, they actually need more supplements because they’re burning at a hotter rate just like an athlete. Some supplements are actually medication, and they should be considered as such.”

How to Determine Which Supplements You Should Be Taking:

“It’s really overwhelming, because you walk down an aisle at the pharmacy and you get overwhelmed. How do you pick and choose? One positive way to do it is to first figure out what’s going on in your own system,” Dr. Comite tells us. “That might require getting certain blood tests. For example, knowing if you’re anemic. In women who are 15-25 years old, they’re just getting exposed to birth control pills, they’re active because they’re trying to look good. They’re not eating a ton of dairy because they’re thinking it’s a high fat content, so they’ll be low on vitamin D. Many of them are not getting vitamin Bs, so absorption is going to be down. You want to take a good multivitamin, generally speaking. Vitamin Bs are important for energy. Many girls are going to be low in energy. Take vitamin Ds and Bs. Also, they should be looking for probiotics because a lot of girls have gastrointestinal issues.”

What You Should Be Steering Clear Of:

“As far as what to stay away from, don’t take anything that really speeds up your system. If you read something that says, “Lose 40 pounds in a week,” don’t believe it. If you take that, you’re going to be sick. Either way, that’s not good for you. I think people are smart enough, but sometimes they’re desperate enough,” she explains.

Signs You Should See a Specialist:

“If you’re really having a problem with your weight, and you’re like your friends and you do your best with living healthy, but your friends all around you seem to have a much easier time of being healthy and not gaining a ton of weight, you need to talk to your doctor,” Dr. Comite says. “There are so many metabolic conditions that make it so much harder for some young women. They can’t burn fat in the same way, and they may have metabolic syndrome, or they have early diabetes and they don’t know it. They can easily turn that around, but you need to diagnose it first. Usually it’s a combination of things, and it runs in the family. If you look around and your mother is struggling with weight, or even if you’re the only one in the family, you need to dig into the details and you’ll find a solution. It takes a lot of hard work, but don’t give up. Supplements can really help.”

How Your Body’s Metabolism is Effected:

Steven Michael Villagomez: “Especially with women who are on birth control, you’re shutting down your production of testosterone, and its role is to maintain lean skeletal mass. Throw that in with a protein deficiency with young women and that can create a metabolic disorder. You’ll actually induce a metabolic disorder, especially if you’re going through puberty while taking birth control. Self image is such a huge thing for young girls, and you need to make sure you’re balanced, diet wise. A balanced diet is protein heavy. It must be alkalinic, and it has to be high in healthy fats. A really good balanced breakfast, for example, is a free range chicken egg, one that’s high in beta keratine where the yolk is orange, and spinach for alkaline. You need to take B vitamins. Their role is for energy production. One of the most important things for young women is sleep. It’ll effect neural functioning, so school will suffer, and performance in physical activity will suffer if you don’t get enough sleep.”

Questions to Ask Before Starting Supplements:

“There are three reasons why people should take supplements, and no one really thinks about these things,” Villagomez explains. “First, is there a deficiency? Most people take supplements blindly, which all that really does is make their urine really expensive. The body doesn’t absorb what it doesn’t need. The body doesn’t want to get it in supplement form. The reason you should take supplement is if there is actually a deficiency in what we’re eating. Second, is it preventive? The best preventive supplement out there is fish oil. It helps with memory through neural functioning. Third, is it ergogenic? Is it going to enhance performance? Are you taking a protein shake after working out? There’s all kinds of things. Once you figure out these three things, you can look at the supplements to take.”

Habits That Deplete Your Natural Health:

“As far as young women are concerned, girls are typically drinking a lot of alcohol, which is the number one depleter of vitamin B12,” he explains. “If you get vitamin B12 low enough, you’ll start having emotional and mental disruptions. Not disorders, but disruptions. You’ll get cranky, you’ll get moody, you’ll get depressed. A lot of it is because you’re drinking too much, so you can supplement with a B12 vitamin to curb these side effects.”

MORE: 8 Tips for an All Natural Skin Care Routine

Supplements for Hair, Skin, and Nails:

“Take Biotin for longer hair & better nails,” Villagomez advises. “Skin wise? The best thing for your skin is what you eat. You want to eat a lot of healthy fats. People think, ‘Oh it’s fat, it’s fried food.’ No. Olive oil is great for the skin. Avocados, nuts, seeds, fatty fish. They all help with elastin in the skin so it keeps things tight. With Biotin, take it as directed. More isn’t better, and that’s simply the American view point on things. But a healthy fat content in the diet of omega-3 and omega-9, that’s the best thing for hair and skin. If you think about it, show dogs are fed a lot of eggs, which helps with their nice shiny coats.”

“Agave nectar! It’s highly processed,” he says. “Use honey, and if you eat honey from bees that have been taken from your geographical area, you’ll actually reduce your allergies during the season. Local honey is the best thing to use as a sweetener.”

“Green, leafy veggies, but be mindful of spinach. It’s high in purines, and that rises uric acid, and if you get that high enough you can develop gout,” Villagomez tells us. “With all vegetables, the brighter the better. Think about an orange or yellow bell pepper. For nature to create something so vibrant, you know it’s good for you. When it comes to all vegetables, it’s the preparation that really matters. Is a baked potato all that bad? No, not really, because it’s still got the nutrition in it. When you fry the potato, that’s when it becomes bad. Stay away from iceberg lettuce, too. There’s no nutrition whatsoever. Most of it is genetically modified, so it’s really got no nutritional value. Protein based, alkalizing foods, and healthy fats, which is the best thing for skin.”