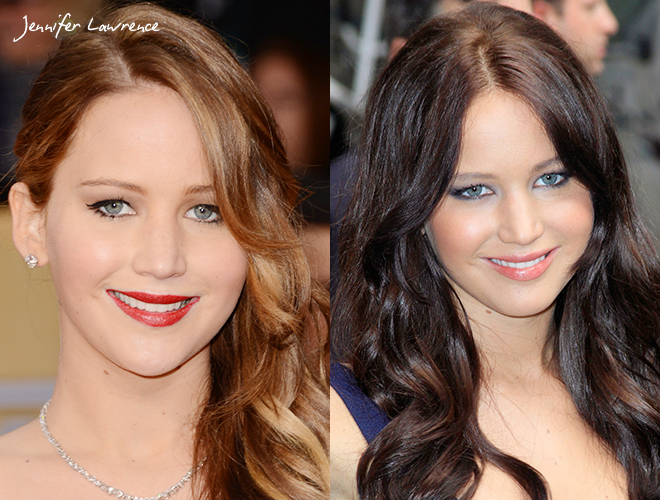 Jennifer Lawrence makes it look easy. One day, she’s accepting her Oscar for Best Actress as a golden blonde; the next, she’s seen leaving a Beverly Hills salon with her hair colored dark brown, reportedly in preparation for her return to the role of Katniss Everdeen in The Hunger Games. Brunette is a winning color for the actress — she also had dark hair in her award-winning role in Silver Linings Playbook and in her recent Dior campaign.

But dark hair color isn’t for everyone. For those tempted to follow Lawrence’s lead, there are a few things to consider before taking a step to the dark side. We spoke with professional makeup artist and brow guru Joey Healy, and master colorist Joel Warren, about the do’s and don’ts of deepening your hair’s hue.

Try the Non-Committal Approach
“Going dark can be a little bit harsh,” says Joel Warren of Warren-Tricomi Salons in New York, and a L’Oréal Professionnel Brand Ambassador. “Sometimes what you think will look good and what the reality is are two different things. People think they’ll look good in black hair, and then they get black hair and they look like Elvira!”

So if you’re not an award-winning actress who needs to go from blonde to jet black overnight, take it easy and try a non-permanent approach, he advises. “If you don’t have any gray hairs, you could use a temporary hair color, such as Dia Light by L’Oréal Professionnel. It doesn’t contain any ammonia or peroxide, so it’ll wash out as it grows out. Whereas something more permanent will be harder to remove if you don’t like it. One of the things about getting rid of dark if you try and lift it, it gets very red,” Warren explains. “So you’re kind of stuck with it.”

Go Slow With Lowlights
Adding pieces that are a few shades deeper is another way to make a more gradual change, Warren advises. “When you’re blonde and you want to go darker, what you can do is slowly add in lowlights that will gradually get you darker, so it doesn’t have to be so severe.”

This also works for brunettes who want to add richness to their shade. “If you’re a brunette and you want to go darker you can leave in lowlights as well,” says Warren, who is renowned for his multi-hued, custom coloring techniques that add contrast and depth to hair. “Then you have sort of a rich, marbelized look, so it’s not so monochramatic.”

Keep it Conditioned
One of the drawbacks of artificially dark hair, says Warren, is that it “can tend to be monochromatic and dull.” So it’s always wise to use a quality, color-specific conditioner on darkened hair, such as the L’Oréal Professionnel INOAColor Care line, which helps to preserve and intensify the color and shine of color-treated hair. 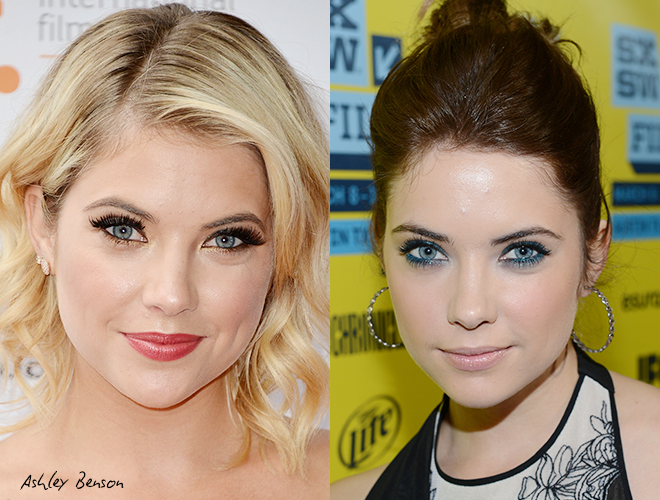 Ashley Benson is another celebrity who recently got a blonde-to-brunette makeover. Notice her slightly darker eyebrows.
Photo: Getty Images

The Brows Have It
If you do go dark, make sure your brows match — but don’t overdo it, says celebrity eyebrow stylist Joey Healy. “When dying hair dramatically, brows need to follow suit, but do not have to go as dark as your hair color. Eyebrows should generally be a little lighter than your hair color if you are going dramatically darker.”

In many cases, brows can be darkened using an good eyebrow pencil or powder — it’s only those with super fair hair who really need to consider eyebrow tinting, says Healy. “If your brows are not as dark as you would like them but density is not a problem, build your pencil or powder color to achieve a darker yet still balanced look.

No Rules (But a Guideline or Two…)
Both Warren and Healy agree that there is no set rule about who should or should not take the dark hair color plunge. “I’m not one for having any rules,” says Warren. “Sometimes the things you think are not properly following the rules of hair color actually look great. So sometimes you see someone who is totally pale with dark hair, and they look great. So, it’s up to you and it’s a matter of taste and opinion and the look you are trying to achieve.”

“Anyone can rock the dark hair trend,” Healy agrees. “But you have to be prepared to own it — dark hair brings out an edgier side.” Healy advises those with certain skin tones should be careful about not going too dark. “If you are extremely fair or have a yellow or olive undertone, you should opt for a lighter shade of brunette, not a drastic dark.”

Be Bold
A red lip is a classic pairing with dark brown or black hair, as seen recently on Kate Moss, who went black (albeit temporarily) for the Louis Vuitton Fall 2013 show in Paris. “A red lip does hold its own with extremely dark hair because there is a balance between the two focal points of your face. Red lips are often not as shocking with extremely dark hair,” says Healy. “If you are going to go dramatically dark, I would suggest you steer clear of a pale lip, as it will make you look washed out – neutral, bright or bold is my choice!”