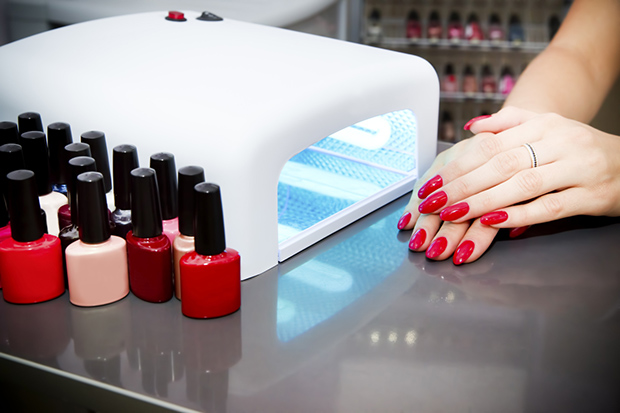 Despite generally being the sort of person who is almost invariably interested in spending large amounts of time seated, lying down, and otherwise reclining, I have a visceral aversion to lingering in the nail salon. There’s something about the too-serene setting, the strangers caressing my hands, and the post-polish wait time that makes me want to spend as little time there as possible. I’ll pay an extra dollar for the quick-dry top coathell, I’ll give you ten if it gets me out of here faster.

Needless to say, nothing gives me a sense of impending doom quite like the concept of undergoing “weekly manicures.” This is the inevitable cycle of getting a manicure in the first place: It chips, it peels, it grows out, and you’re back in the chair five days later, selecting a new color and wasting another thirty minutes. And yet, dichotomously, I’m actually the type of girl who does like to have a fresh manicure at all times. It’s somewhat tied to a kind of personal myth of mineI’m all but convinced that I look pretty sloppy all of the time, so in my mind, clean, well-groomed nails lend me an air of legitimacy that I might otherwise lack.

You already know where this is going, don’t you? With my myriad pathologies and ongoing mission to appear as put-together as possible while exerting the least amount of effort, I’m the perfect candidate for submitting to the siren song of the gel manicure. With the promise of long-lasting color (up to three weeks!), shine that won’t quit, and the happy byproduct of looking a little more like someone who spends careful time on their appearance rather than the scrappy, fly-by-night, stereotypically early-20s upstart I am in my head, what could go wrong?

I experienced three straight months of blissful newlywed gel nail blissan extended honeymoon period, if you will. With a veritable chip-free existence, I was able to experiment with more exciting colors than my standard sheer nudes. I wore tons of rings, because my nails and fingers suddenly became something I was okay with drawing attention to. I wore lipstick in contrasting colors. I gesticulated wildly. I even convinced myself that, because my nails felt harder, sturdier, with the layers of gel, they were actually becoming stronger.

Oh, the naivety. The delusions. Around the end of my fifth consecutive gel manicure, the point at which a few centimeters of new growth had appeared, I noticed things getting a little… dodgy, to say the least. My nails were long, but they felt weak, almost bendy. The gel polish was lifting on the sides and at the bottom, and the tips were chipping terribly, taking layers of actual nail off with them. I wasn’t too concerned, because whatever, it’s just nails, and I’d go get them redone soon and everything would be great.

I was actually getting ready to leave my apartment and go to the nail salon when, after using my nails to comb through my hair, my thumbnail started to break. I don’t mean like your average hangnailthe best way I can describe it is to say that the nail itself broke away from the skin on the side of my thumb and split horizontally, almost halfway down the length of my nail bed. It wasn’t something I could just pull or clip off unless I wanted to bleed profusely and hurry to the emergency room, because what the hell do you do with a thumb that only has half a nail? I departed for my original destination post-haste.

The women at the nail salonmind, not the nail salon where I had been getting my gels reappliedwere horrified, and understandably so. They couldn’t believe I’d been doing the gels one after another for so long, and they were adamant that I take a break. The technician had to glue three of my nails back onto my nail bed after using acetone and an orange stick to remove the gel. It was the gel manicure experience horror story to end all gel manicure experience horror stories. There was blood. There was pain. And my god, my nails looked terrible. 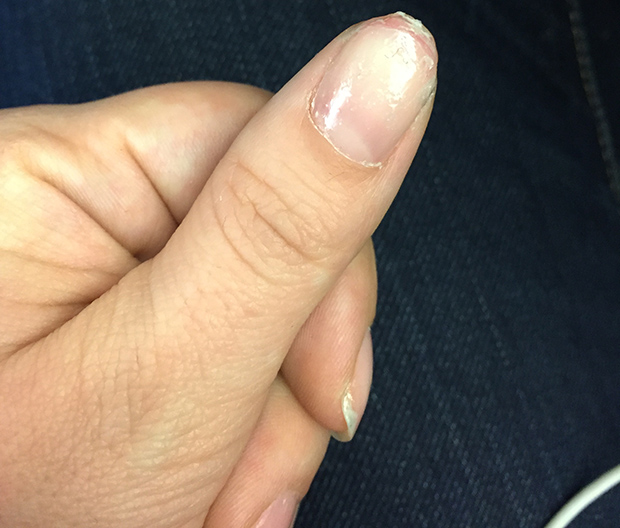 In the end, I was so concerned with the extraordinarily vain pursuit of having perfect nails that I actually destroyed my own perfectly fine natural nails. They’re all pretty bad right nowweak, brittle, peelingbut my left thumb is the real victim here. As you can see, it broke almost entirely down to the quick, which means there’s raw, exposed (and incredibly sensitive; getting my pants on is real difficult) flesh from my nail bed poking out. In fact, the guy I’m dating, who a) is usually pretty complimentary of most things related to me and b) not particularly concerned with my minor beauty qualms because he is male, noted without solicitation that it was “pretty gross.”

And it is. It really is. It’s totally, totally gross, and kind of bloody and weird, and I did it to myself. So let me offer myself up as a martyr, as a cautionary tale. I’m not telling you not to get a gel manicure. If you’re going away on vacation or have an important event, it makes perfect sense, and for my part I’ll still say that it was great while it lasted. Just be aware that there are very realand genuinely painfuldangers associated with long-term use. I’ll definitely be steering clear of gels for the time being… until next time, that is. I like to live on the edge.

Read more: 11 Things Your Nails Are Trying to Tell You About Your Health