Earlier this month, I decamped to Montauk for Cynthia Rowley’s annual surf camp. Before then, I’d only been surfing once (unless you count couch surfing) so I thought, if nothing else, it’d be a fun little getaway. I went into it with two main objectives. First, and perhaps most importantly, to not get eaten by Jaws. That was a big one. Secondly, I was curious to explore surfing as a practice for joy and mental health, and not exercise necessarily.

Rowley, an avid surfer, has always said that surfing is her form of meditation. As someone who has trouble sitting still and quieting her mind, meditation, though I love the idea of it, has never been my forte. But once I got out in the water, I understood. (I am a Pisces, after all!)

After suiting up in a Cynthia Rowley wetsuit, which was in and of itself a victory (more on that later), we were given a quick tutorial on the beach by a local group of surf instructors and then paddled out.

It’s been nearly 20 years since I developed an eating disorder, the disease that wrapped its tentacles around my world, slowly contracting and threatening to never loosen its grip. Since then, my relationship with movement has become increasingly strained and unduly complicated, and a far cry from the dance classes and basketball practices of my childhood, which I saw as enjoyable activities before anything else.

A few months shy of my 13th birthday, exercise started to become a chore; something I had to do every day, often twice a day, as punishment. As the illness progressed, my relationship with movement crossed into dangerous territory: I’d go for a run after dark in foreign cities, in inclement weather, or while sick, injured, or plain exhausted, which frankly, was always.

When I finally, and begrudgingly, sought treatment during my junior year of college, I learned that the years of severe restriction and excessive exercise had done serious damage to my heart. Consequently, I had to keep physical exertion to the bare minimum. Cardio was totally off-limits, and I ended up having to take a leave of absence from dance, which has always been my thing. During that first treatment rendezvous, we’ll call it, I had to surrender my running shoes to my treatment team–but not even then did I feel as though I had “permission” to abstain from exercise.

Eating disorders are notoriously difficult to treat, and chronicity greatly impacts one’s likelihood of recovery. Because I’d been struggling with anorexia for almost a decade by the time I was initially admitted to treatment, the thought patterns and behaviors were deeply ingrained and painfully difficult to resist. As a result, I was in and out of treatment centers and hospitals around 15 times throughout my twenties.

Ultimately, it was on an inpatient unit for eating disorders that I began to explore a healthier relationship with movement–something I’m still, and may always be, working at. This particular program is known for its treatment of exercise addiction in addition to anorexia, bulimia, and other eating disorders. So once I was medically stable, I started working with an experiential and physical therapist who prescribed a closely-monitored, gentle routine. Initially, I scoffed at it.

My experience with movement therapy helped me begin to realize that I can, in fact, trust my body.

“This isn’t real exercise,” I’d say, rolling my eyes. “Real” exercise, to me, was a flurry of numbers shrouded by self-hatred and deceit; a race toward a narrowing vantage point in my head I couldn’t quite decipher. My survival has depended on rewiring my brain to think otherwise.

My experience with movement therapy helped me begin to realize that I can, in fact, trust my body and that I don’t need to exercise to the point of exhaustion to maintain my body’s set-point, even though that’s a number I’m still not comfortable with. (Especially in a wetsuit, I might add.) But treatment has been, dare I say, the easy part. The most challenging aspect came once I was discharged and returned to my everyday life where the same triggers I’d temporarily left behind were there to greet me with open arms.

It’s my intention to reframe exercise, not as a means for burning calories and weight-loss, but a practice for its mental health benefits.

The tricky thing about exercise is that it is not inherently bad; in fact, it’s a really good thing, as we’re constantly reminded. It’s a healthy and necessary part of life for most and has a whole laundry list of physiological and emotional benefits. However, as they say, there can be too much of a good thing. And it’s been difficult to identify where that line exists. Factor in our culture’s obsession with thinness, fitness, and wellness (or, in 2019, diet culture in disguise) and it becomes even more baffling.

Over the past year, I’ve worked incredibly hard to make peace with exercise and, ultimately, myself. I’m still very much a work in progress, but it’s my intention to reframe exercise, not as a means for burning calories and weight-loss, but a practice for its mental health benefits, clarity of mind, and stress reduction. (Endorphins make you happy, people! And happy people don’t–well, you know the rest.)

I’ve been exploring forms of movement that haven’t been a symptom of my eating disorder–for instance, it can be incredibly challenging to get on a treadmill or an elliptical, both of which became a daily confessional of sorts at the depths of my illness, and not work out until the cows come home. (This is New York: the cows are never coming.) So I’ve taken up Pilates (love) and cycling (not so much); I’ve tried boxing (meh), yoga (not for me) and most recently, surfing. 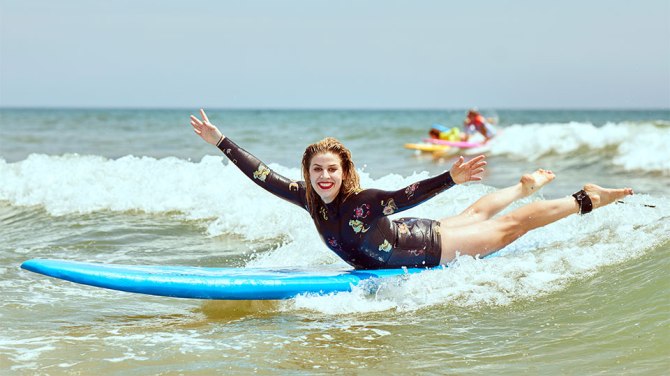 Learning to surf was daunting at first. But much to my shock and delight, I actually caught some waves and stood up a few times on the board before wiping out. And after spending a couple of hours in the water I had an epiphany of sorts: There I was, wearing minimal clothing on a beach surrounded by people. Historically and even still, that is something that lands far, far outside the orbit of my comfort zone and I know I’m not alone in that.

But the act of surfing takes so much concentration that, while doing it, I wasn’t able to think about anything else except finding and maintaining my balance. Not my body, not the number of calories I was burning, and certainly not the number of calories Jaws would ingest if he selected me off the lunch menu. The second any one of those wayward thoughts popped into my head I, quite literally, lost my footing. I had to, at the risk of sounding like a cheeseball, become one with the water. And in doing so I felt, albeit briefly, at home within myself.