If there’s one thing we know about Cynthia Erivo, it’s that she doesn’t do boring. The British actress-singer-songwriter (a true triple-threat) continues to surprise us at every award show. Erivo’s Oscars nails for 2020 are just as much of a surprise. She hit up the red carpet with pearl-colored hair, lush lashes and major nail art. Erivo is nominated for Best Actress for “Harriet” and Best Original Song for co-writing and performing “Stand Up” from the film. If she wins one tonight, she’ll join the EGOT club. No big deal!

Erivo is also performing her song from “Harriet” tonight, which means there’s a good chance she’ll switch up her look. But now, we’re loving that silvery ‘do. Per usual, it’s courtesy of hairstylist Coree Moreno, who used the Dove Amplified Textures line, including the Shine & Moisture Finishing Gel ($6.99 at Target). We can thank makeup artist Terrell Mullin for the dramatic makeup. 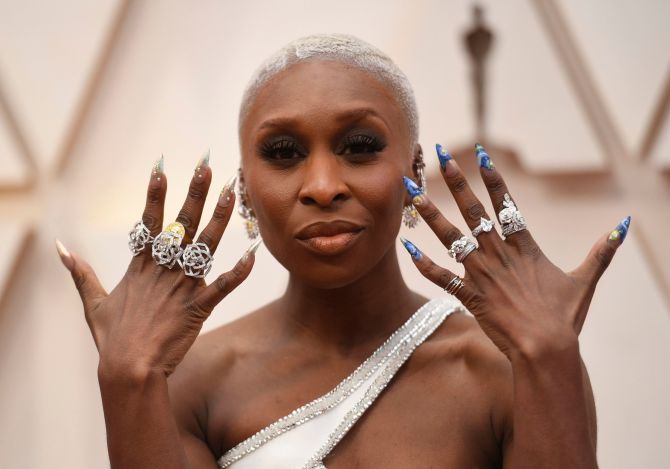 Now, about those nails! Manicurist Gina Oh used Christian Louboutin Beauty nail polish ($30-$120 at Saks Fifth Avenue) for the already iconic nail art. According to the brand, Erivo was “inspired by Vincent van Gogh’s Starry Night and wanted to create a look that symbolized Harriet Tubman following the North Star to freedom.” Oh hand-painted the van Gogh-inspired nails on Erivo’s left hand. She affixed crystals to the nails on the right hand to add to the constellation-like vibe. So impressive.