As much as we hate to admit it, Kim Kardashian has seriously impacted the makeup world. She’s hardly the first to try contouring, but her insane before and after photos made women everywhere want to learn this transformative makeup technique. Makeup artist Rolando Robinson made over four women from our own office and walked us through the steps for proper contouring. 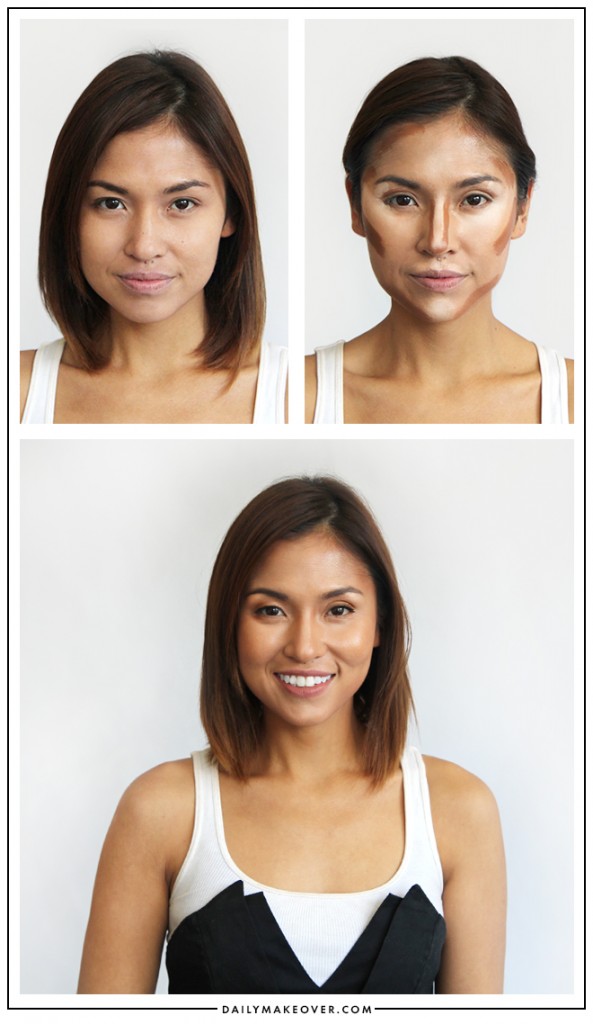 Cheekbones
For our first model Sam, Robinson wanted to focus contouring on the cheekbones to make them really pop, though he made sure to contour the rest of the face, too. To begin, he moisturized the face. “Always, always, always moisturize your skin. I love moisturizing with oils. I also swear by L’Occitane Lotion Divine ($56, loccitane.com).” He mixed it with Beauty Counter Lustro Face Oil 3 ($64, beautycounter.com) and Laura Mercier Radiance Primer ($33, lauramercier.com) before applying to her face.

After applying foundation, he began to highlight. “Use a liquid, like a foundation or BB cream. Make sure it’s two shades lighter than your skin.” For Sam, he mixed It Cosmetics CC+ ($38, ulta.com) and Dior Hydra Life BB Creme ($56, dior.com) to get the right color and consistency for highlighting. He used a large concealer brush to place highlighter under the eye and up on top of the cheekbones, creating a U-shape. Then he went down the bridge of the nose and in between the eyebrows. “This flattens out the forehead and makes it look smaller than it is.” He finished by placing a small amount on the cupid’s bows, at the tip of the chin and on the outer corners of the brow bone.

Once highlighting is finished, the shading begins. Robinson used Dolce and Gabbana Perfect Matte Liquid Foundation in Soft Sable ($67, sephora.com). “If the color looks too dark it’s okay.” Start at the temples and go down, stopping at the center of your eye. “It gives depth and narrows the face.” Use contour on the sides of the chin to shape it, as well as along the hairline. You should also go down the sides of the bridge of the nose and in the center of the nose to give the illusion of a smaller tip. Also apply to the creases of the eye. To contour the cheeks, Robinson drew a straight line going from the outer corner of the eye to the center of the cheek. It should line up with the end of your nose.

Next comes the most important part: blending. Robinson used a stiff foundation brush to buff out the areas he contoured, so they appeared seamless. Use small circular motions when blending everything in. He then finished the look with mascara, eyeshadow, lip color and bronzer on the apples of the cheeks. 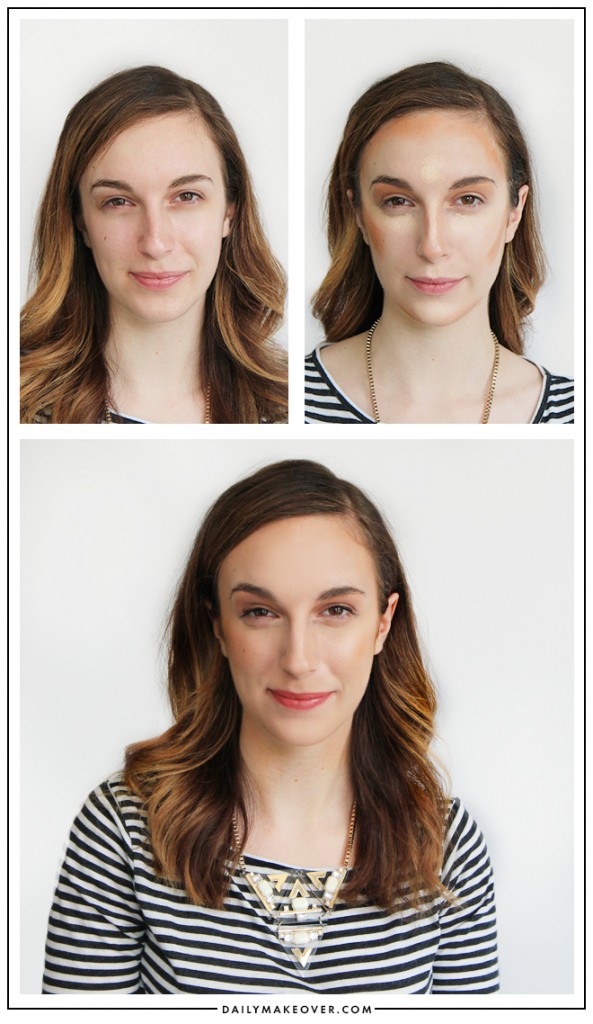 Eyes
Robinson worked to bring out Augusta’s eyes when doing her contouring. “When you’re contouring a face with naturally strong angles, you’re just punching those out. It’s not as difficult and you don’t have to fake it as much.” After moisturizing, priming and applying foundation, Robinson used a blush brush to apply Butter London Cheeky Cream Bronzer ($24, butterlondon.com) to the lids. He then applied Chanel Joues Contraste in 55 in Love ($45, chanel.com) to the lids, starting at the outer corners and working in. “Even though this is considered a cream blush, it’s a mauve-y color, and the warm undertones look natural.”

Next, he used a stiff eyeshadow brush to apply a deep bronzer from the inner corner of the eye’s crease to the outer corner. When applying, he suggests, “Use just enough to give your lid separation from the brow bone, nothing too intense.” Then he lined the eyes with Votre Vu Le Crayon in Chocolat ($16.10, votrevu.com). “Do the outer corner, then just smudge it in, making sure you’re not going too sharp with it.”

For the rest of the highlighting and shading, Robinson used Dr. Jart Bounce Beauty Balm in 01 ($48, sephora.com) and Sonia Kashuk Undetectable Creme Bronzer ($10.99, target.com). He finished the look with Butter London Lippy Liquid Lipstick ($18, butterlondon.com), which he mixed with Mac Pro Lip Palette in Hangu ($40, maccosmetics.com), and Dr. Hauschka Illuminating Powder on the T-zone, on top of the forehead, and under the eyes. 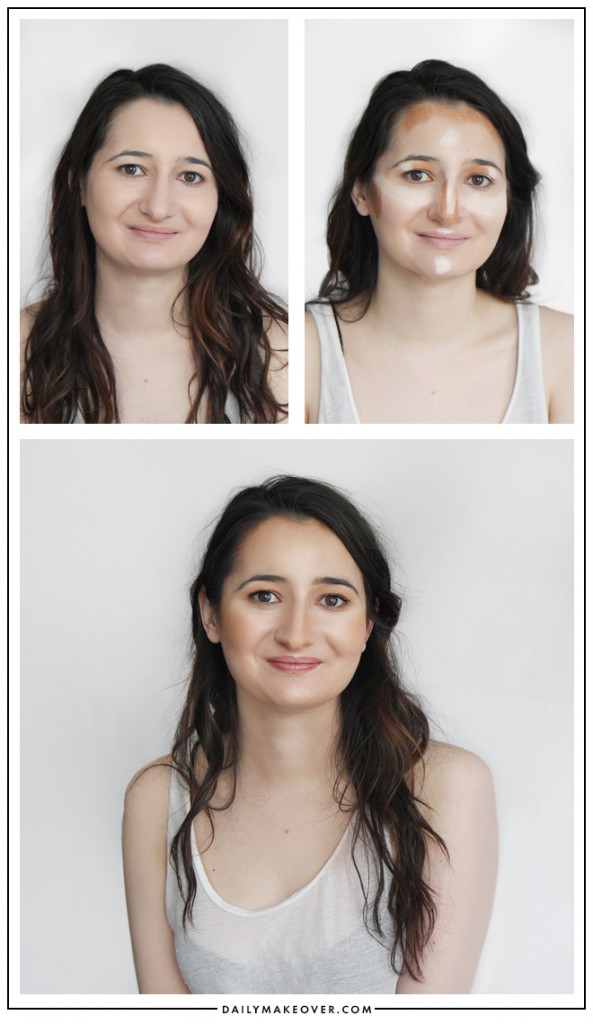 Nose
Contouring isn’t just about emphasizing, it’s also about de-emphasizing. In Rachel’s case, Robinson worked to slim down the nose, but also take attention away from it by drawing eyes to the cheeks. Once moisturizer, primer and foundation were in place, Robinson used MAC Pure White Paintstick ($21, maccosmetics.com) down the bridge of the nose and along the cheekbones.

For shading, he used Sonia Kashuk Undetectable Creme Bronzer ($10.99, target.com) down the sides of the bridge of the nose and at the tip of the nose. To help make her cheekbones stand out, he placed shading in the hollows of her cheeks, near the ears.

After blending all of the makeup, Robinson placed MAC Pro Longwear Paint Pot in Let Me Pop ($20, maccosmetics.com) at the tops of the cheeks for a healthy glow. He finished with StriVectin Clinical Corrector Anti-Aging Lip Tint in Pink ($19, strivectin.com) and Make Up For Ever Aqua Lip Waterproof Lip Pencil in 2C ($19, sephora.com) on the lips. 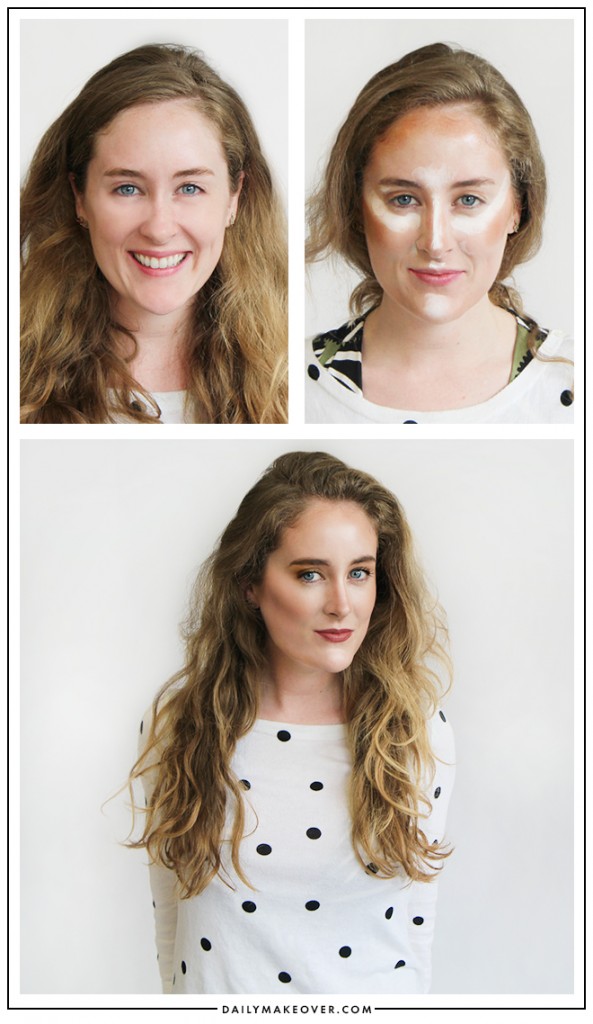 Dramatic Contouring
Robinson gave Cailan a more dramatic contouring look, which is perfect to wear out at night. After applying primer and foundation, Robinson started with the highlight. “I like to highlight first and then contour. The highlight is just a marker for where you’re going to set the rest of the product.” He used MAC Pure White Paintstick ($21, maccosmetics.com) on her smile lines. “Highlighter around the mouth hides the smile lines, and it makes everything uniform.” He also highlighted under the eyes and up toward the temples, as well as down the bridge of the nose, in between the eyes, on the cupid’s bow, and on the tip of the chin.

For this particular look, Robinson used two forms of shading. He started with Tom Ford Illuminating Cheek Color in Amber, which he applied with a small, flat foundation brush. He applied to the sides of her nose and then brought it up toward the inner pockets of the eye. He then applied along the hairline and along the cheekbones, directly under the highlight. He went back and applied Dolce and Gabbana Perfect Matte Liquid Foundation in Soft Sable ($67, sephora.com) over the Tom Ford product to make the look more intense. He blended everything in using a combination of his fingers and a buffing brush.

For the eyes, Robinson applied the same foundation he used for shading all over the lids, pressing it in like a stain. He then applied a gold eyeshadow to the lids to bring light and radiance to the eye. “This will help with dimension and creating depth.” He used the same gold to go back over the bridge of the nose to make everything blend. He applied Laura Geller Baked Bronzer in Medium ($38, laurageller.com) by starting at the outer corner and working in toward the crease. “After applying eye makeup, I like to go around the brown bone with the Beauty Blender to keep the edges soft. You want it to blend.” He finished with liner and mascara.

For lips, Robinson used Butter London Lippy in Tramp Stamp (out this fall). “If you want the lips to push forward or be the focus, highlight the outer edge of lips. It helps to smooth the liner. If you want a sharp lip but don’t want to use a liner, use an angled brush.”