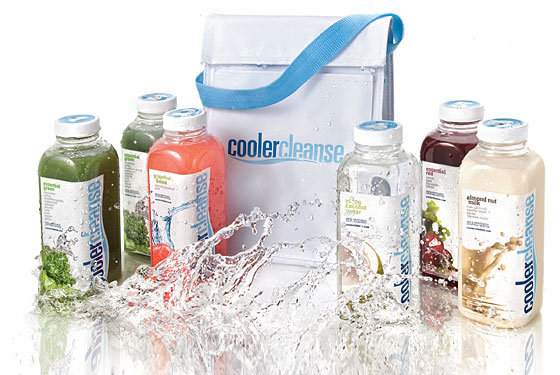 Fact: I, Susie G, have never done a juice cleanse. Well, that was the case up until a few weeks ago when I got the opportunity to pop my juice cleanse cherry and go on a 3-day Cooler Cleanse.

If you’re not familiar with Cooler Cleanse, they’re delicious hydraulically pressed juices made from healthy, raw foods and ingredients. You may also be surprised to know that not only is actress Salma Hayek a fan of the detoxifying drinks, but she’s also a co-founder of the line of juices, along with Eric Helms, who founded Juice Generation, a small chain of healthy juice joints based here in New York City, back in 1999.

Since I’ve had a mix of friends and co-workers go on juice cleanses and heard all sorts of good and bad things about them, I felt I was both mentally and physically prepared to try one out for myself. So, the two days prior before I started the cleanse, I did what anyone else would do–eased myself into three days of no solid foods by eating light food and drinking lots of liquids.

Come the first day of my pressed juice adventure, I got delivered all 18 bottles that I needed for the 3-day cleanse, meaning I’d be drinking 6 bottles, every 2 hours over the course of the next 36 hours.

And instead of giving you a play-by-play of the cleanse, I’ll just give you the Cliff Notes version of my first-ever juice cleanse:

The next few days after, I eased myself into eating solid foods again starting with only 1-2 meals a day, going for something light like a soup, salad and eating a light snack or two like some yogurt or a low-fat string cheese. In addition, I also waited a day or two to start drinking alcohol again.

The result? I definitely noticed some weight loss with my face appearing to look a bit thinner and my gut looking smaller than usual (unfortunately, I failed to get on a scale before and after so I don’t have the actual numbers to back up my observations). Plus, the next few days, I noticed that appetite wasn’t super big and that it had almost felt like my tummy got smaller so I could only digest small meals as opposed to big hearty ones.

Now, if you’re wondering if I would recommend the Cooler Cleanse, especially for a first-timer like I was, then I would say yes. The drinks were pretty yummy for the most part and I didn’t feel like I was absurdly starving overall. Also, I really enjoyed the boost of energy and not feeling so exhausted all the time.

For a 3-Day or a 5-Day Cooler Cleanse, prices start at $58 per day. You get them delivered all at once so be sure you also have room in your fridge to stock them all.

After my experience, I’ve literally been praising the cleanse to all my friends, especially those that work in fashion since, let’s face it, we’re always trying to stay fit, active and keep up with those hectic schedules of ours. Oh, and just because this cleanse may not be a “designer” or “trendy” cleanse like some others, doesn’t mean it’s not as good.

In fact, I’ve heard it’s actually even way better. But hey, I guess you won’t know until you try it out for yourself.

For more information, be sure to visit CoolerCleanse.com.

[Image via Gourmande in the Kitchen]