When we think of women we would kill to sit down and talk beauty with, Christina Hendricks is at the top of the list. That hair! That skin! Those vintage updos she rocks with aplomb as Joan on Mad Men!

So when we got the chance to do just that—actually hang out with the newly blonde Christina Hendricks and get her to spill all her beauty secrets exclusively for Daily Makeover—we leapt at the chance. Here’s what she told us about her dramatic hair change, taking risks and saying goodbye to Joan. 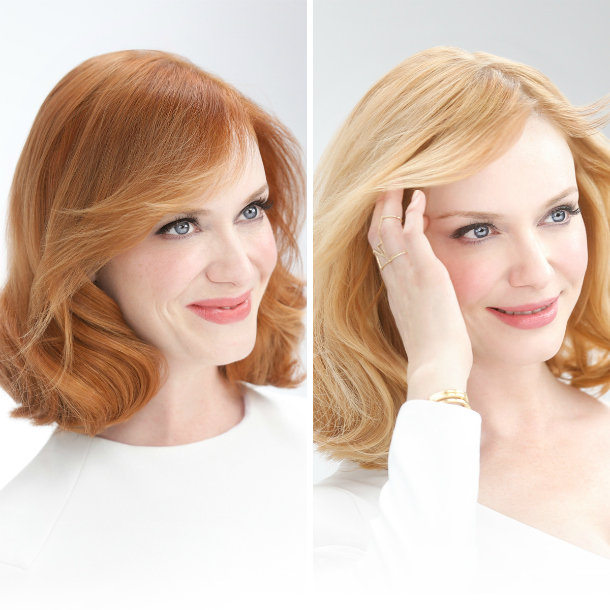 In person, Christina Hendricks is stunning. Let’s just get that out of the way: she is the kind of beautiful that cannot be faked in any way. But more than that, she’s also genuinely warm and kind, which just serves to make her even more gorgeous.

Speaking of gorgeous: her new hair. We were skeptical when we heard that the Clairol color ambassador had ditched her famous red locks, but her new blonde is beautiful—multi-tonal, shiny, slightly strawberry-blonde and remarkably undamaged.

The decision to go blonde was partly influenced by the end of Mad Men, the AMC show she’s starred in for seven seasons. “I had the red for about twenty years, and even though it had been twenty years, I was associating the character of Joan with it,” she told us. “It was a super-emotional ending, and I thought, you know what, it would be really fun to go back to blonde. And so here I am, embracing change!”

Though saying goodbye to Joan was hard for the five-time Emmy nominee, making the major hair change was surprisingly simple. “It was very easy, it took under an hour!” Hendrix said (prompting amazed gasps from this editor). “This blonde is about two to three shades lighter than my natural color, but we just lifted it and put the box on.”

The box in question? Clairol Nice ‘N Easy in 8G, Natural Medium Golden Blonde, responsible for her brand new (like, three days old) blonde. “I used to use the light auburn,” said Christina, who has colored her own hair for years. “My hair feels good, my ends look good, it was quick and painless. It’s not like the old days, where you’d put blue all over your head and it would burn and you’d hope for the best!”

Even more than the visible changes, Christina is a fan of the emotional effects that come from a hair color transformation. “I’ve never been afraid of changing my hair; it’s always very fun and adventurous, and I have a new attitude afterwards. If you’re hesitant, it doesn’t have to be super-dramatic. You can just shift a little, and it’s going to make you feel different and brighten your mood!” 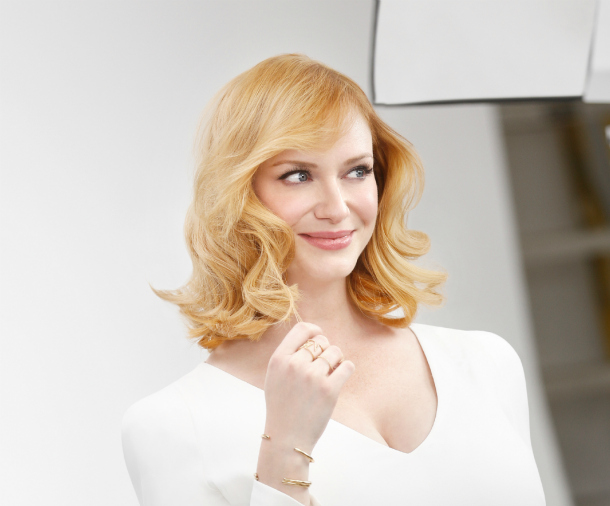 But of course, anyone who’s ever made a big hair change knows that caring for your new color can be tricky—so allow Christina to come to your rescue with her very best haircare advice. “When I work, I have a lot of product in my hair,” she says. “But I don’t use a lot of stuff in between. I do a super intense mask about twice a week, and I use shampoos and conditioners especially for colored hair. I really don’t overdo it, and I think that really works for me.”

Speaking of things that work: her skincare routine, because this woman is legitimately flawless. “I tend to have dry skin, so I use a lot of moisturizer,” Christina told us. “I look at my skin each night; if it feel really balanced, I’ll use something light; if I’m dry, I’ll use something heavier. I love the Dermalogica Super Rich Repair Moisturizer ($82) or the Tatcha Camellia Oil ($95). I just listen to my skin, I think that’s very important.”

But her big skincare secret? Unsurprisingly, it’s sunscreen. “I use two different sunblocks—one by Dermalogica ($33) and one by Skinceuticals. I make sure to put it on my face, my chest and my arms. I’m diligent about that. I sometimes have a tinted moisturizer that has SPF in it, but I don’t think it doubles up.”

In addition to the tinted moisturizer, her every day makeup essentials are pretty simple (and things that we find in our own bags on the regular): “Cream blush, a tinted lip balm either by Fresh ($22.50) or Burt’s Bees ($7), and always an undereye concealer.”

And as we admire Christina’s beauty game, so does she admire the beauty of other women. We asked her who her biggest hair, makeup and style inspirations are right now.

“I really admire Florence Welch. She looks good; every time I see her I think ‘She is CHIC.’ She’s such an individual, and she’s just such a light. Charlotte Gainsbourg, I always love. And Kirsten Dunst; she always looks so great.” 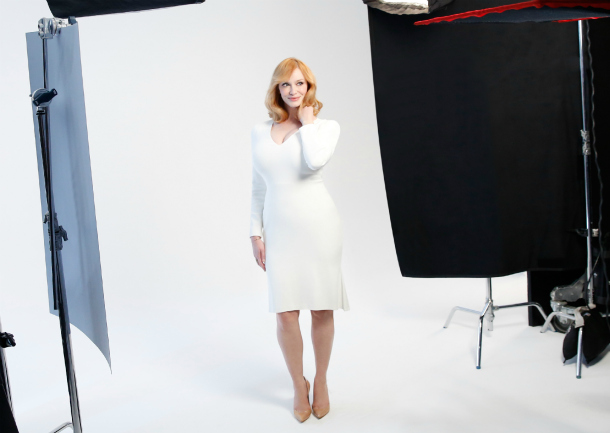 So what’s next, career-wise, for Hendricks? Just an unbelievable amount. “Post Mad Men, I did ten episodes of a Comedy Central show (Another Period) that’s coming out soon,” she told us. “I just completed a pilot (Roadies) with Cameron Crowe and JJ Abrams. I have a movie coming out with Charlize Theron called Dark Places and a movie that Ryan Gosling directed called Lost River. So I’m really keeping busy to distract myself from the end of Mad Men!”

And what’s next for her headline-making hair, now that she has more freedom to color it? We’ll just have to wait and see. “I love the blonde, my husband loves it, and it makes me happy,” Christina said. “But if I were going to go wild, I would go with not a PINK pink…but a sort of champagne-apricot rose gold. If I could get really wacky, I would do that.”

Whatever she does, we know we’re absolutely going to love it.