There’s a reason there are so many memes about bangs all over Instagram. See: “I don’t always decide to get bangs, but when I do I regret it four minutes after they’re cut.” They’re not an easy hairstyle to rock and can often seem great at the moment but regretful once they’re grown out into your eyes. Of course, Charlize Theron’s bangs are basically perfect. What can’t she pull off? The star debuted her baby bangs last night at the New York premiere of her new film Long Shot.

Celebrity hairstylist Adir Abergel is responsible for Theron’s look, as well as her recent switch to brunette hair. In a statement, he calls Theron one of his “greatest muses.” He says: “It’s been so much fun working with her. A couple of months ago, we decided to take her brunette and cut her hair into a bob for the Oscars. I love that she is a risk taker and explores different styles. For the premiere, we wanted to push it just a little bit further, and I decided to give her some faux bangs.”

That’s right: the bangs are fake. Faux hair is a great way to switch it up for the night, especially if you’re not ready to take the plunge. Abergel says his inspiration for the night was a photo of Linda Evangelista from the ’90s. “Linda was always bold with her looks and so is Charlize,” he says. 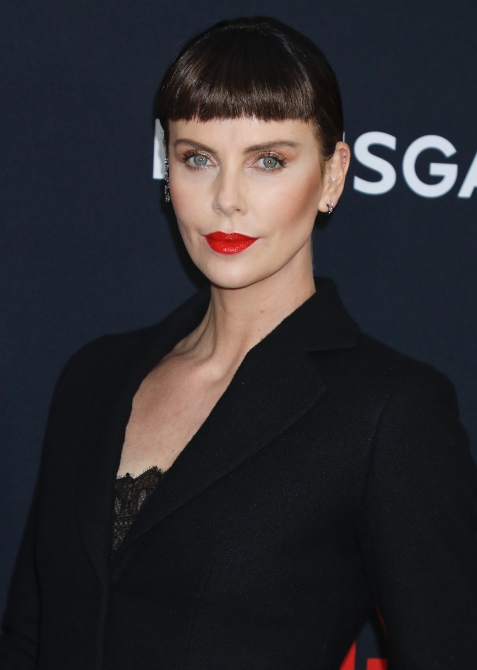 To create the look, Abergel prepped Theron’s hair the night before so it would be hydrated and shiny. He used Virtue Restorative Treatment Mask, a favorite of mine. The next day, after washing and conditioning, he applied Virtue Un-Frizz Cream and Virtue Volumizing Primer from Theron’s roots to the mid-shaft of her hair to give frizz-free lift. He rough dried her hair and followed it up with a flat iron. Once super-straight, Abergel pulled her hair into a low ponytail and secured it with an elastic. To finish, he clipped in the faux bang and added a bit of the Un-Frizz Cream for smoothness.

Theron looks beautiful and edgy at the same time with her choppy baby bangs. I might be cursing her in the future if I try the trend and don’t look half as great.