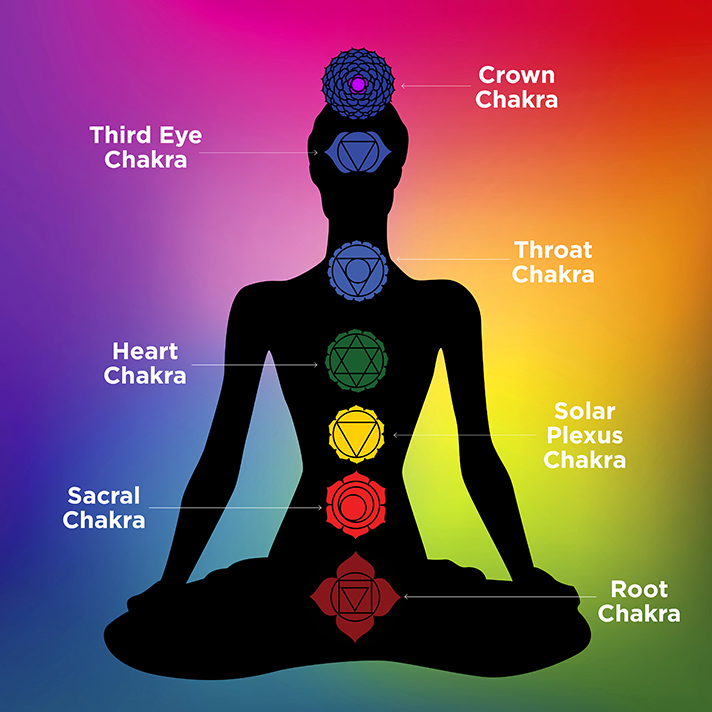 There’s a part of every yoga class that usually causes me to cringe inwardly—it’s when the teacher talks about “unblocking chakras” or uses Sanskrit words that no one understands to talk about energy healing. When I’m feeling virtuous, I’ll occasionally smile and think that the idea of spiritual healing is so quaint, but cynical Jasmine prefers to shoot a meaningful look at the least alternative-looking yogi in the class, or to roll my eyes. However, 2016 has been a year of exploration in the alternative health realm for me; there was the week that I dabbled in crystal healing, and the Sunday I spent at a sound bath. I even tried reiki. So by this point I’m really drinking the Kool-Aid (slash kombucha) and finally thought it time to look into the concept of chakras.

L.A.-based energy healer Azalea Lee gave me the inside word, explaining that chakra is Sanskirit for wheel, and the seven we refer to are different “vortex points” of energy in your body. According to Lee, chakras are involved in everything that we do, and it’s important to create a balance so that no one point is over- or under-active. Lee told me there are a multitude of ways this can be done, which include, “using color, sound, physical exercises such as yoga, and crystals.” As you’re probably beginning to realize, chakras and energy healing are much more conceptual than other alternative therapies that might use massage or physical touch for healing.

Pain, discomfort, restlessness, and general unhappiness are signs that you’re experiencing an imbalance. And to determine which chakra is out of whack, you need to learn about the emotions that govern all of these points in your energetic body. Lee also suggests visiting a good energy healer—or you could just keep reading this beginner’s guide to the seven chakras. I’m not saying I totally buy into this, but that doesn’t make the concept any less interesting.

Lee explains that this point, located at the base of the spine, near your tailbone, governs survival issues such as money, food, and financial independence, as well as your physical connection with Mother Earth. “When energy healers and spiritual guides speak of grounding, this is the chakra they are talking about,” she explained. Lee says the root chakra is connected to the “energy of being in a physical body” with its immediate needs of food and shelter, the most basic needs to survive physically. It’s thought that because we need money to meet our physical needs for survival, financial issues are triggered by root chakra issues and not your lack of self-control when using a credit card. Bridge pose is the yoga move tasked with helping to open your root chakra, and eating spicy foods is also supposed to help. (Alternative: Seek assistance from financial advisor.)

It’s thought that those really warm, open, grounded, genuinely nice individuals are not that way due to any genetic disposition toward friendliness or emotional stability, but rather because they have a well-balanced sacral chakra. The reverse could be said of a person who is either cold and disconnected, or annoyingly needy. When this important emotional center, located about one or two inches below your belly button, is out of whack, the symptoms could include hypersensitivity, trust issues, and general emotional volatility. Alternative-health experts recommend hip-opening yoga poses and dancing to restore balance—although if that doesn’t work, you might just want to go ahead and consider therapy.

This point is located slightly below your solar plexus, or above your belly button. It’s the third chakra, and is often associated with the color yellow. Your self-worth and self-esteem are linked to the solar plexus chakra, as is the ability to exercise will and turn your ideas and dreams into reality. If this chakra is blocked, the yoga position “boat pose” can allegedly help, as can eating yellow-colored foods like corn (seems legit?), or peppermint and chamomile tea.

If you learn nothing else today, walk away knowing that the heart chakra is basically considered the MVP of chakras—it’s the most powerful energetically, as it’s governed by what’s considered the highest vibration in the universe: love. “There are different perspectives on this topic, but in my experience, the heart chakra is the most important, as it is the bridge and translator between the higher spiritual chakras and the lower physical chakras,” explained Lee. She says that the heart chakra is the “fulcrum to all the other chakras,” meaning that it has a profound effect in in making sure all of the points are balanced.

The voice of the body, the throat chakra is often associated with the color blue and is located in the region of the neck and shoulders. When it’s in balance, we can express what we think and feel in an authentic, truthful way. If this point is unbalanced, it can impact the other chakras. Negative thinking and doubt can block your throat chakra, which can be helped with meditation. Lee has another, less-discreet method to try if you’re struggling to express yourself authentically: “If one has an underactive throat chakra and needs to express themselves better, screaming into a pillow may be an exercise to activate  if you believe your throat chakra to be overactive, she suggests not speaking for an hour.

Struggling to focus or to see the bigger picture? Having problems making decisions or thinking through problems? It’s entirely plausible that your third-eye chakra, a.k.a. brow chakra, is in need of some TLC, which can be delivered through yoga poses, including child’s pose. (Also possible: You’re just an easily distracted human or should go to bed earlier and get more sleep.)

Located at the crown of your head (does the name make sense now?), this is the highest chakra and represents spiritual connection. The crown chakra deals with issues of inner and external beauty, bliss, and spirituality, and it is supposed to be balanced by both meditation and running or cardio styles of exercises.