Maybe you live in a city without a boutique, Instagram-driven economy, in which case let me briefly explain the tenets of cat yoga: 1. It’s yoga. 2. With cats. Typically these events are hosted by cat cafes, which, again for those of you I mentioned above, are little storefronts filled with cats where you can enjoy a coffee and a treat while cats run around you.

A lot of people will tell you yoga isn’t a competition or a sport and that it’s about self-care, gratitude and one-ness with the world. And they’d be right. But cat yoga is an entirely different ball game. It’s got cats. And that means there are stakes. And that means you need strategies. Luckily for you, I have done the grueling, thankless work of attending a cat yoga class and will now allow you to benefit from my wealth of knowledge.

There are a bunch of factors to consider when selecting your cat yoga outfit . The first is that kitten claws are scientifically proven to be the sharpest material on the planet, so don’t wear anything that could snag or tear, or anything you don’t think would look better with a Freddy Krueger-style slash through it. If you feel similarly protective of your skin, consider long sleeves and pants as well.

You’re also going to want to stay away from baggy sweatshirts or anything that’s likely to bunch up around you during a downward dog—you’re paying to experience cats, and the last thing you need is to have your sight compromised for even a single pose.

Also, I know it’s an exercise class, but making sure you look cute enough to be tagged is an important consideration. After all, these places are in the Instagram business, and you never know when you’ll be the center of a kitty moment they think is perfect for The Feed. If/when that happens, you might not want to look like Oscar the Grouch on a tampon run. (Trust me, you’ll thank yourself later.) 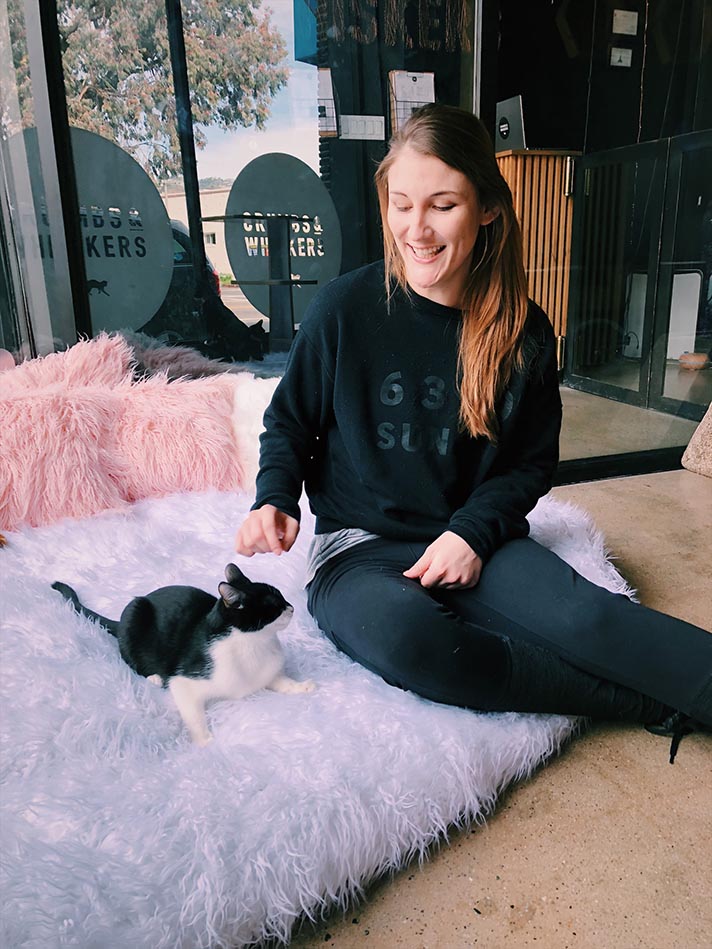 I’m a big proponent of bringing a friend to anything that could possibly be construed as a group activity, or indeed anything that takes place outside of the home where there are strangers. However, cat yoga isn’t about people, and it certainly isn’t about friendship. It’s about cats. And the last thing you need is the jealousy factor if one of you racks up more cat touches than the other, and you definitely don’t want someone potentially sapping your cats away.

That being said, you still will need an ally on your journey. While you’re in line to get in or setting up, establish rapport with someone in the vicinity. This will come in handy in case you find yourself in the midst of an adorable photo opp and need someone to document it. Also, it’s hard to make friends as a young adult! (Mostly the photo thing, though.)

3. Get there early, and pick a strategic spot.

If you’re going to an early session like I did, the cafe might not open its doors until five minutes before your appointment is set to begin. You might be tempted to wait it out from the comfort of your car and avoid prolonged social contact while the other participants are queuing up in front of the establishment. This would be a huge mistake, because being among the first in line has a major advantage here: having your pick of where to set up your mat.

I recommend locating the cats’ food source and setting up near that; it’s a guarantee of consistent cat proximity. Sitting near the back is also ideal, A) for the same reasons it is ideal to be at the back for any group exercise, but B) it’s also an ideal vantage point to take in all the cat shenanigans, observe who is having the best cat interactions, and mimic their strategies. 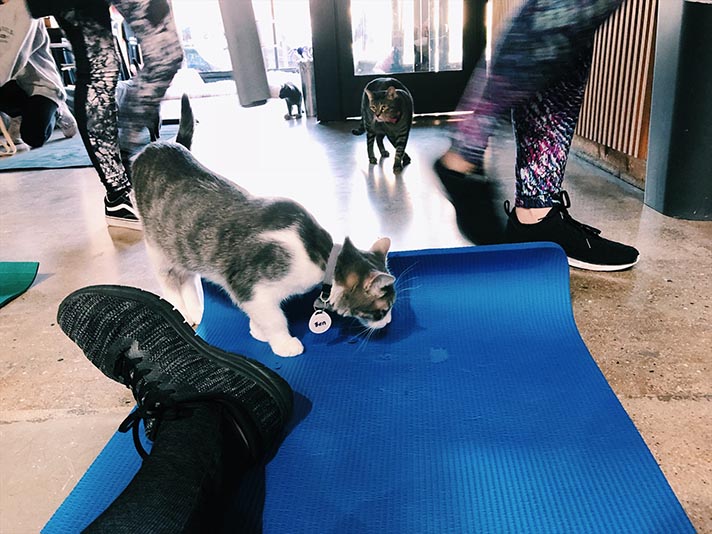 4. Keep your head on a fucking swivel.

I know it’s technically a class, but don’t get caught up trying to follow every word the instructor says or attempting to accomplish yoga poses in a way that won’t embarrass you in front of the group. This is valuable time and mental energy that should be used to take in your furry surroundings. Cats are very quiet by nature, and if you lose focus or buy into the whole “keep your eyes closed to pay attention to your breathing” thing, a cat could park on your mat without you even realizing.

While you’re doing your best to execute your airplane pose as well as the girl next to you who is looking unfairly hot in the sports-bra-only-with-leggings look, a dozen cats might pass you by unpetted. That’s exactly what sports-bra-girl wants. Don’t let sports-bra-girl win.

5. Resort to trickery if you must.

Look, I love cats, but they have no sense of fair play or even distribution, or honestly really any loyalty at all. It’s part of their “charm.” But what this means is that you do have to vie for their attention, and you’ve gotta be cutthroat about it. Does your yoga mat have straps or strings on it that, from the right angle, might look like a toy to a passing kitter? Perfect. Do you have long hair that a cat might want to play with? You’re ahead of the game. If you have time beforehand (which you should, if you followed step 2), grab a toy and play with a cat for a minute to pre-establish a bond that you can cash in on later.

Above all, though, avoid wanting it too bad. Cats are similar to 20-year-old boys in a lot of ways—the most significant of which being that they can sense desperation and will flee from it.