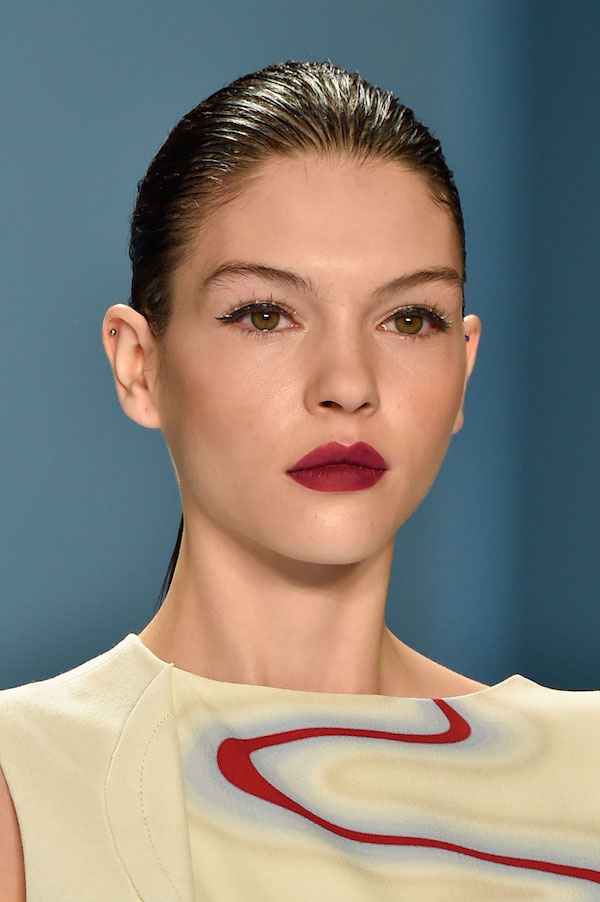 At the Carolina Herrera show during New York Fashion Week, an aquatic-themed beauty inspiration (where models were made to appear like they just stepped out of water) yielded simply stunning hair and makeup results.

Using the aquatic vibes that the designers clothing collection entails, models debuted beautiful makeup looks consisting of dewy, glossy lids, fluttery faux lashes embellished with silver glitter, perfectly-set highlighter, and a matte red lip. You might not generally associate emerging out of water with flawless cosmetics, but this look filled with soft, feminine colors and glossy, glistening textures is sure to change that.

MORE: Get This Simple Nail Art Design From Prabal Gurung

To get the look, makeup artist Diane Kendal for MAC Cosmetics started by prepping the models skin with Studio Moisture Creme and Studio Finish Concealer and then applying and blending Sincere Rev blush on the apples of the cheeks. To give the complexion that glowy, illuminating look, highlighter was applied to the cheek bones, down the center of the nose, and on top of the brows—which were slightly filled in where needed with shadow and then brushed.

The glossy and wet eye makeup, which has made appearances at a few shows this season, was created by applying MAC’s clear Lipglass to the lids.”I do like using the MAC gloss because it’s kind of quite sticky, so it doesn’t move that much,” explained Kendal.

The intricate water droplet lashes might not be so accessible for daily life, but that doesn’t mean you should shy away from the allure of them for special occasions. To create that effect, the artists took MAC #33 lashes and applied silver glitter to them using a silicone product. The makeup look was finished off with MAC’s liquid lipstick, Oh, Lady, which is a rich and opaque shade of red and will be released this fall. To a similar look, try reaching for MAC’s Longwear Lipcolour in Lasting Lust.

The aquatic inspiration translated to the embellished ponytails as well. Hairstylist Orlando Pita for TRESemmé wrapped thin pewter or silver leather lace around the base of a low ponytail that was straightened and enhanced with styling balm and spray to appear wet. For the nails, half of the models wore glossy red manicures with essie’s ‘forever yummy,’ while the other half wore a delicate satin-like look that was created by layering essie’s pale ‘imported bubbly’ shade with ‘allure’ on top.