Caribbean culture didn’t just play a vital role in my upbringing. It’s practically embedded in my veins and continues to help shape the woman I am today. As the child of a Trinidadian mother and Kittitian father, I grew up watching the Caribana parade in Toronto, Canada, where the procession of women dancing freely in complex masks and bejeweled costumes became the highlight of my summers. I knew that eventually, the second-hand joy I felt merely watching from the sidelines would no longer suffice. I wanted in.

Carnival remains the backbone of Caribbean identity not only in Canada but across the globe. In most places, celebrations take place over 1-3 days, with various events such as Fete and Jouvert leading up to the parade, also known as the main event. Though its overall origins are tied to colonialism and religion with ancient African customs woven throughout, Carnival celebrations may differ depending on your geography. Today, you’ll find men and women playing mas in (but not limited to) Trinidad, Barbados, Grenada, Antigua, St. Lucia, Jamaica, St. Kitts, and a slew of large cities in North America; most notably Toronto, Miami, and Brooklyn.

In order to play mas (or be in the parade), preparation is key. Parades are made up of “bands,” and if you want to take part, joining a section within one of these organizations is required. Every year, each band selects a detailed theme and spends several months getting ready for the road. Costumes can cost as low as $250 to over $1,400 for a full frontline experience which typically comes with perks, like all-inclusive drinks, meals, goodie bags, makeup retouch stations along the parade route and more.

The design process is perhaps the most intricate (and time-consuming) of all, as costumes are carefully assembled by band leaders and countless volunteers in mas camps designated for production. The groundwork is undoubtedly an impressive feat but ultimately, Carnival’s legacy is so much more.

It symbolizes freedom, pride, and rebellion. The parade is where Caribbean women can free up themselves and dance to the sweet rhythms of soca, calypso, and steel pan without the fear of unfair judgment. As a self-proclaimed Carnival Chaser, the pride and excitement I feel watching women of all shapes and sizes play mas is unwavering. As a teenager, I jumped up with a band for the first time and it transformed the way I looked at traditional definitions of beauty and body image. Observing a certain level of unity and pride from women wukking up in formation and flaunting their bodies symbolized agency. 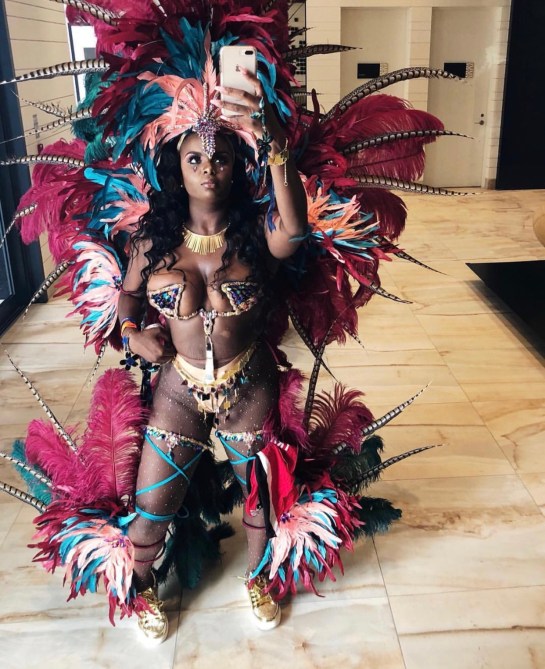 Nothing has stopped me from playing mas, including the weight fluctuation I continue to experience since becoming a mother in my early ’20s. In fact, I feel sexier, stretchmarks and all, getting dolled up every Carnival season. A confidence this unyielding wouldn’t be possible without the women I watched as a child. In fact, one can argue that masqueraders advocated for body positive spaces and over-the-top beauty choices long before either was embraced by beauty brands and high-profile influencers. Though it may be ahead of its time, the Carnival scene hasn’t been without its own set of challenges too.

Despite masqueraders varying in shape and size, there was a time when most costume designers created garments to suit societal beauty standards. Consequently, a common complaint among participants was that women with curves were left with little simply because they didn’t fit a sample size. However, thanks to the tireless work of seasoned designers like Solange Govia, the Carnival experience is finally a place where inclusion is a lifestyle, not a trend.

Govia, who works with a primarily female team and just released a stunning campaign, Eye of the Soul, in preparation for Trinidad Carnival 2020, is an industry leader spearheading that change. “From the inception of my design career 12 years ago with TRIBE, it has been my personal motivation to always ensure that every woman feels that they have a place and space in the Carnival experience…I’ve always been an advocate for catering to all women in all forms of beauty.”

With Govia’s eye on ensuring that masqueraders feel like they’re being catered to, she’s conscious of the bodily changes and experiences that the average female masquerader has had in their lifetime. Being “all-encompassing as possible,” she notes the importance of her designs accurately reflecting “The Carnival Woman.” 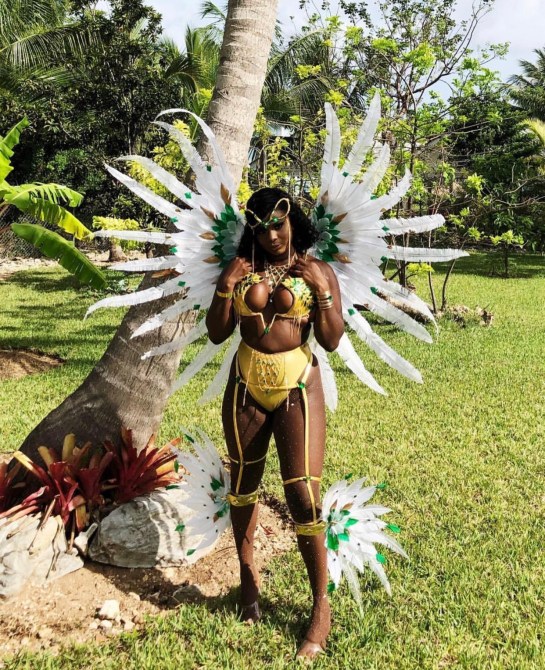 “The beauty in bringing my designs to life largely lies in a female masquerader being happy, looking confident and feeling her best on the road.. you see that from miles away,” she says. “So yes, I’m happy now that we’re taking an open-minded approach and making conscious action to embrace body positivity because it’s not just a global trend. This is our normal here in the Caribbean.”

Women do nothing less than indulge in makeup too, where vibrant eyeshadow, long faux lashes, bright lipstick, diamond studs and more are Carnival staples. For decades, extensive budgets and months of preparation have been devoted to planning the type of looks being lauded on shows like Euphoria today.

“Ever since I was young it was always about getting long nails to match our costume, painting our own sneakers and adding gems, gluing extra feathers to get the right dramatic look and putting bright colors in our hairstyles to match our costume or country of origin,” says fellow Carnival Chaser Sherry Dacosta. “What’s so unique about Carnival is it’s very DIY. The night before mas, women get together for a large sleepover, everyone’s helping everyone out to finish up their last-minute fixes, do each other’s hair and finalize accessories. It’s really emotional and empowering to watch.”

The saying “Carnival is a woman” is often echoed within the Caribbean community. For me, it’s a testament to the women who continue to advocate for themselves and others in a space where body positivity, self-love, and acceptance is a priority, not a choice. Now that’s something worth celebrating.