When I tuned into Cardi B’s Instagram yesterday, I expected to see her eye-opening and fascinating conversation with Senator Bernie Sanders. I did not expect to see Cardi B open a mango with her nails on Instagram Live but that’s exactly what happened. While waiting for Senator Sanders to join her Live, Cardi says she’s going to go grab a snack. She comes back with a mango. Someone from her team asks if she needs a knife and she says she doesn’t. Instead, she proceeds to cut open and peel her mango with her ultra-long, square-tipped nails. It’s an incredible sight.

Cardi has many talents. She’s a rapper and a singer, and a politically savvy businesswoman. She’s charitable, too, as evident by her recent Coronavrius relief announcement. Cardi partnered with her frequent brand collaborator, Fashion Nova, to fund donations of $1,000 every hour until May 20th, totaling one million dollars in aid. I also love that while she makes money moves, she looks glam doing it.

For her Instagram Live with the Senator, in which they spoke about him endorsing former Vice President Joe Biden for president, she wore a blue wig with literal bows of hair courtesy of Tokyo Stylez. For her makeup, Erika La’ Pearl gave her a neutral smoky cat eye and a ’90s-style nude lip. Cardi has Pure Nail Bar to thank for the extra-long, baby blue nails that helped her cut open that mango with ease. 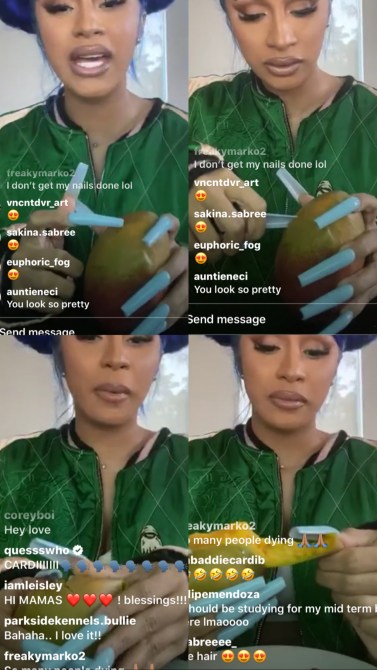 While I’m not sure how she’s getting so glam while physical distancing (it’s possible they’re staying with her), I love her for it. You can have a smart, engaging conversation about our political climate while still feeling your best, badass self. We should all aspire to be just that.