Normally, the SAG Awards—or, really, any type of red-carpet awards—is reserved for incredibly shiny blowouts, perfectly formed waves, and intricately braided updos that only hair wizards with a zillion apprentices and fingers could master. But then, every so often, a hairstyle comes prancing down the red carpet that makes us want to pet our television screens with envy. And last night, that hairstyle belong to Bryce Dallas Howard, who had, arguably, one of the coolest (and easiest to re-create) updos of the night. 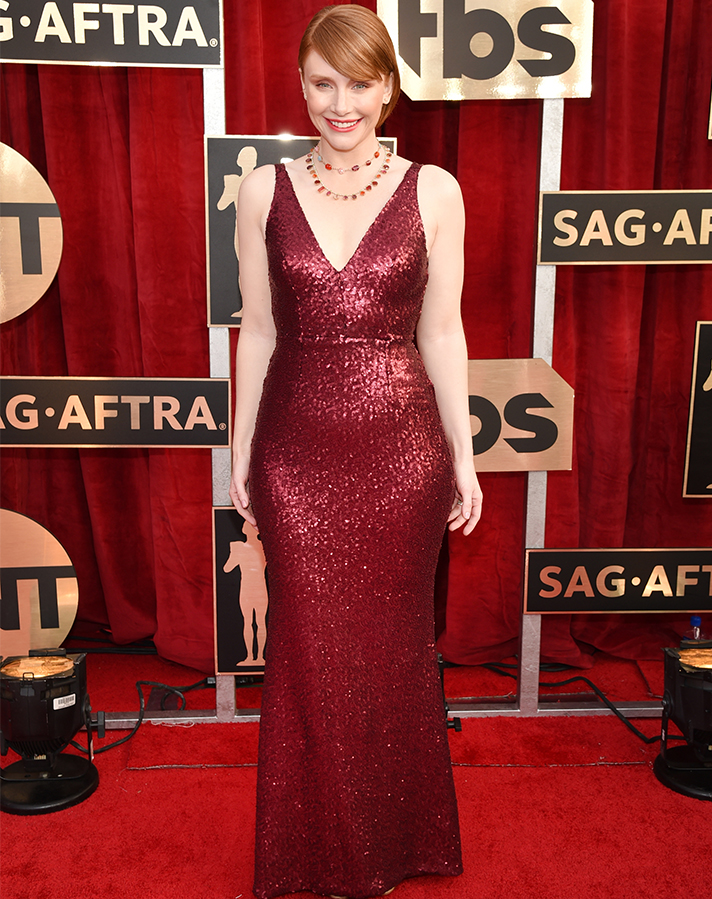 Howard, who wore a ruby-red Dress the Population gown (which was only $309, by the way), kept her hair seemingly simple—just a sleek, low bun, with side-swept bangs, courtesy of hairstylist Adir Abergel. Well, that’s what it looked like from the front, at least. But a peek at the back of her head pretty quickly proved that Howard’s hair was actually a freaking gorgeous work of art, and Abergel might just be a hair genius. Seriously.

Abergel posted the below photo to Instagram last night during the awards, with the caption: “Here’s a little back detail of my origami-inspired updo featuring the Liquid Metallic Barrettes from my new hair accessory line @adirxleletny.” OK, sure, his caption is a total plug for his new accessory line, which launches next month, but we’re fine with it, because Howard’s hair looks so damn cool. And because we love it (and you) so much, we’ve broken down the hair steps so you can try it out on yourself at home.

To get the look, Abergel combed a dollop of Virtue Polish Un-Frizz Cream through the actress’s damp hair (full transparency: Abergel partnered with Virtue for the SAG Awards), sprayed her roots with Virtue Uplifted Volumizing Whip, and then blew out her hair and flat-ironed the ends for a super-smooth finish. He then secured her hair into a low ponytail at the nape of her neck with a clear elastic, pulled the ponytail up toward the ceiling at an angle, folded it in half, and clipped the middle of the little hair bundle with two gold barettes to anchor it. And boom—origami-style updo. We told you: It really is that easy to do.