I was barely 21 years-old when I looked down and realized that my nipples were also looking down. I made this discovery only after I managed to stop staring at the tiger stripes expanding and multiplying exactly where cleavage should be taking shape. My boobs sag. A lot. They are not a result of having kids or some medical condition. I have saggy boobs just because, and until last year, they were the bane of my existence and one of the few insecurities I have about my body.

I don’t remember when the sag became a sag. I’m guessing somewhere between my sophomore year of high school when they were A-cup bee stings, and college graduation when they had swelled into 32-C deflated bee stings.

I prided myself on resisting the need for perfection, so I shoved those feelings away and shared them with no one. If possible, I would’ve kept them tucked inside the bra I wore nearly 24 hours a day. A good underwire had to keep them from drooping even more, right? It wasn’t until I was faced with the very real prospect of breast cancer that I learned to finally appreciate them. 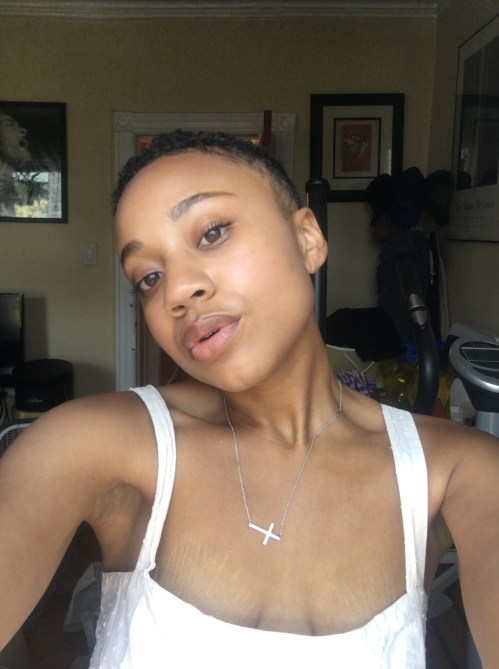 My brush with breast cancer didn’t come out of nowhere, either. It materialized because I bemoaned my perfectly healthy, but saggy breasts. Saggy boobs were not supposed to happen to me! I have genetics to thank for my clear skin, thick legs and big brown eyes. For some reason, the chromosome that gave my sisters round and perky breasts seemed to skip me. I reasoned that it was something I did. Maybe I worked out too much. Maybe I missed something in anatomy. Whatever it was, there would be no chance to flip it down—or in this case, up—and reverse it.

The chromosome that gave my sisters round and perky breasts seemed to skip me. So I reasoned that it was something I did.

At this pre-Instagram time, the body positivity movement didn’t yet have a name, and stretch marks were strictly something to get rid of, despite being natural and generally unavoidable. For me personally, social media has always been a frenemy; sometimes fun, but I keep it at arm’s length because I ultimately don’t trust it. Even turning 30 didn’t magically erase my insecurities; knowing I was one year closer to hopefully raising a daughter of my own only made them bigger–and something I could no longer avoid.

It didn’t matter how many times I publicly declared plastic surgery was too risky and expensive–I felt uncomfortable in my skin. Getting a breast lift felt inevitable.

I thought this would be my “Sex and the City” Samantha Jones boob job moment, minus the bleak ending.

This is how I ended up in an Upper East Side medical spa last April to get the go-ahead for a Vampire Breast Lift, a non-invasive procedure that would make my dream of perkier breasts a reality. Everything went according to plan. I sat on a fancy table, talked to a savvy doctor and scheduled my appointment for a couple weeks later. There would be a needle involved and some discomfort, but with zero downtime and results in a matter of weeks. My only complaint was that I couldn’t do it right then and there.

In fact, I was so excited that I nearly forgot about a doctor’s appointment I had a few days later. It wasn’t for a breast exam—I was there for a prescription refill—but because I was due for one and had the time, I figured why not? The seemingly standard appointment suddenly got way more dramatic than anticipated. “I feel a lump at 9 o’clock,” said my doctor, as I totally forgot why I went there in the first place.

I reminded her that my last doctor said I have lumpy breasts, which my mother confirmed and reassured me was normal. At this point, my doctor grabbed my finger, laid it on top and pushed down on the hard, crooked mass I was feeling for the first time because, well, I hated my boobs and didn’t normally dig into them.

Insecurities of any size are worth fighting because, in the end, it could be the thing that threatens your existence.

In the blink of an eye, I also recalled my last doctor recommending an ultrasound, which I never got after she casually reassured me that being young and healthy meant it was probably a harmless cyst. Being the busy New Yorker I am, it was easy to let that one slide down my to-do list since the word “cancer” hadn’t been mentioned.

This time was different. My doctor demanded I go within the month. It was nothing to play with, she reasoned, and a physical exam alone wouldn’t guarantee a definitive false alarm. Well, now I was worried. But I was also angry. Not only do my boobs sag, but they might be filled with cancer too—’get these things off of me!’, I thought. Since the day felt otherwise normal, I went home and continued to work as if the last hour hadn’t existed.

But call after call about my possibly defective boob sent me into a staring contest with myself in the mirror.  I noticed a huge dimple just inches from the lump that looked dangerous, one that I hadn’t noticed until just then. Even I was surprised when I collapsed into a Viola Davis-level ugly cry on my bathroom floor. A couple hours ago, I thought this would be my “Sex and the City” Samantha Jones boob job moment, minus the bleak ending. Instead, it had turned into a nightmare–and this was only after being told I might have breast cancer.

Now I had to get to a doctor, like, yesterday. After hours of phone calls, I still had to wait one month for an ultrasound and mammogram, during which I tried to keep myself from going down a Google rabbit hole and slipping into manic and depressive episodes (one of the reasons I need therapy). Had I not been so vigilant, who knows how much longer I would’ve carried the weight of a scare. I probably would have given up. Ultimately, it would be another three months before I found out I was benign and *knocks on wood* in the clear, thanks to a gynecologist who is actually invested in my health and sensitive to my concerns.

I won’t get into the intricacies of the broken healthcare system: how no one took me seriously because of my age (“You’re only 30? No way you have breast cancer!”) despite having family history, how a technician didn’t bat an eyelash as I cried and asked her to note the dimple in my results, how another technician tried to send me home despite the fact that my doctor requested a 3-D mammogram and ultrasound because of dense breast tissue, how I spent an entire day going from hospital to hospital for a timely appointment because my doctor miswrote a referral twice that inevitably prevented me from being seen every time I rescheduled; how a small part of me will always be scared that the doctors missed something because of how I was treated every step of the way.

I also spent well over $1,000 to find out I didn’t have a tumor in my breast (and TBH, I’m still paying some of it off) and discovered firsthand what it means to be a Black woman and have your pain overlooked. And I did all of this while attempting to be present at work and at home. By the fall, I had dropped almost 25 pounds from medication and the added stress of friends and family saying “you’re fine” or “this happened to my friend and she was fine.” I isolated because I was sick of people pretending the risk wasn’t there instead of validating my feelings. Had I actually been diagnosed, I’m not sure how I would’ve managed and now, I have another level of admiration for women who endure breast cancer period.

After months of squishing, flattening, pricking, prodding and waiting, I’m not going to lie—I still wanted a breast lift, but not as desperately as before. I was literally amazed at how my body had looked and eventually felt after so much physical and emotional anguish.

I can still run for miles on the treadmill. I can complete to-do lists at work. I walk around my apartment naked because that’s the best part of living alone. And my boobs sag just the same despite being manipulated into the shape of a pancake multiple times; a miracle if I ever saw one. In fact, I think they’re kind of cute, squiggly stretch marks included. I’m actually embarrassed that I invested so much anxiety into them, to begin with. 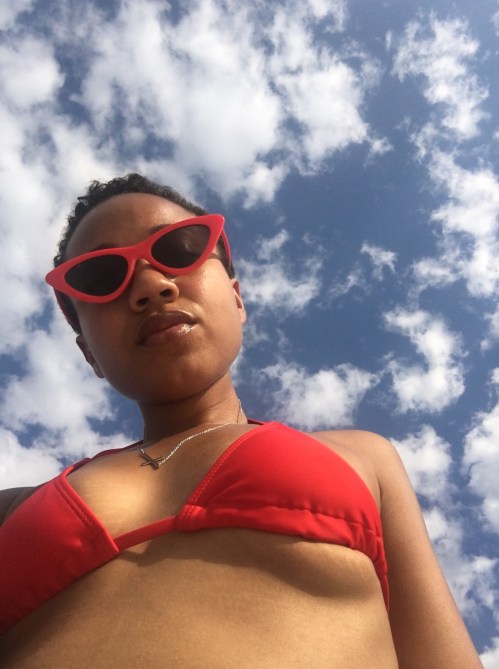 My faith has taught me that it often takes tough experiences to put things in perspective. Life would certainly be easier if it wasn’t that way, but I’m (thankfully) not in charge of the universe because the lessons have only elevated every part of me. I’m not sure what made me think my body was ever the enemy and at this point, I don’t think it’s worth trying to figure out. It’s probably a combination of things that anyone with sense, including myself, shouldn’t be afraid to take a stand against.

All in all, the most noteworthy takeaway was learning that it’s important to question and confront negative thoughts, no matter how “right” or accurate they feel. Insecurities of any size are worth fighting because, plot twist: sometimes, they become the one thing that threatens your existence.