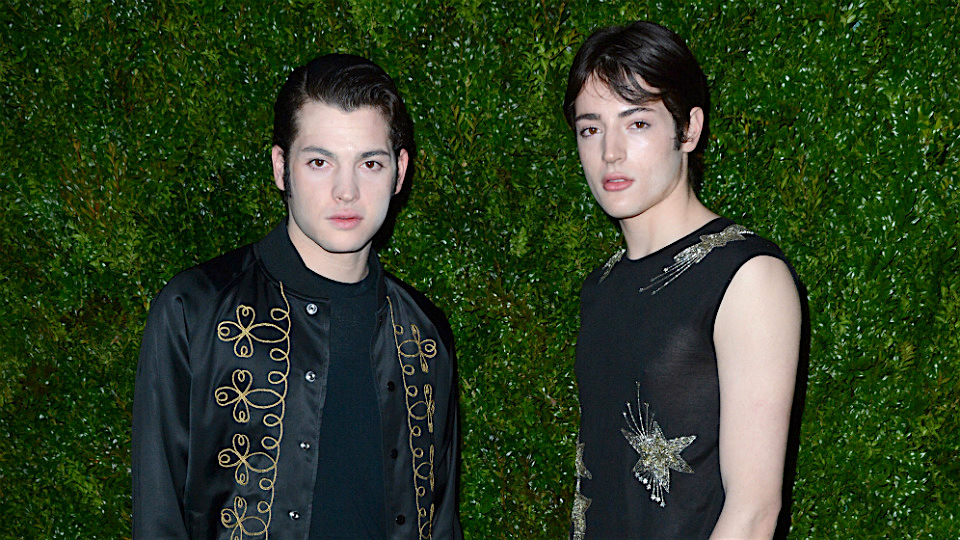 Socialites, It-boys, Fashion Week fixtures—call Peter and Harry Brant what you will, and you’d be correct. The two brothers have become synonymous with big-city glamour, and evidence of their extreme love for fashion and beauty can be seen in party photos from across the globe and on their equally stylish Instagrams. So it’s not too surprising MAC Cosmetics came knocking with the offer of a makeup collaboration.

When I meet Harry for the first time at the MAC studio, he’s decked out in full-on glam-rock regalia: a band tee, skinny velvet scarf, and skintight drainpipe jeans—eyes lined wide in metallic liner. He immediately compliments me on my choker and delves into talking about M&J, a craft and trim store in New York City. “It’s better than sex,” he laughs. Peter comes off with a different, more restrained vibe, dressed in all black, but is just as knowledgeable about the world of fashion and beauty.

It makes sense: the brothers grew up with supermodel Stephanie Seymour as their mother. “All of our mom’s best friends were makeup artists,” says Peter. With the duo launching their second collection with MAC makeup this August, which will include everything from highlighter, brow products, eye kohl, brushes and eye shadows designed to be worn on both genders, we caught up with the inimitable duo to talk about pancake face, corsets, and beauty disasters.

StyleCaster: First and foremost, in what ways did your mom, Stephanie Seymour, inspire this collection?
Peter Brant: She inspired everything. She really was never big on us wearing a lot of makeup, but when we did, she was like, “Well, you’re going to do it right.” She doesn’t really wear a lot of makeup herself—a little bit on her lips and eyes. It should look natural.

Tell me a little bit about your own approach to applying makeup.
Harry Brant: For example, what I have on right now does not look natural. But it’s not trying to look natural. It’s a statement. When you’re wearing makeup to enhance your features—like contouring or foundation, it should look natural, because you’re trying to have the illusion that you woke up like that.

Peter: Like the best version of yourself. Highlight all that. That’s part of the fantasy.

Harry: It’s like why people have worn corsets. Well, that’s mutilation, but I love it.

Peter: See, Harry always wanted his feet to be eight inches long, so that’s why he likes foot binding.

Peter: It’s like with models who have one feature that stands out, you should use it. And personality is very telling too.

Harry: Especially when it comes to your face. Your makeup is a reflection of your personality, and you don’t see a basic bitch with pretty cool makeup.

Harry: I like to look very pale, so I end up looking like a geisha. But pancake face is the most terrifying. Peter and I always talk about pancake face. If you put makeup on then you put powder on, then you put more makeup on—if you layer stuff badly and it’s cakey, you have these different layers like a flaking pancake. It’s just disgusting. That is the opposite of natural.

Peter: It’s like when you’re like, “I’m sorry, I can smell your concealer from here, can you please step back?”

Harry: That’s why I love the dewy look, and if I am going to wear powder, it’s going to be translucent. It’ll take the shine away, but it won’t give you matte skin. Because no one has matte skin unless it’s dry.

What’s one product you both admit to wearing daily?
Harry: I think it’s very good for you to go a day or so without wearing anything. But I don’t have the luxury of wearing perfect skin, so, sometimes I don’t feel self-confident enough to go out without wearing makeup. I don’t think there’s anything wrong with that. There isn’t one thing I wear every day, but if I had to pick I’d say penciling in my eyebrows and wearing eyeliner because that doesn’t affect your skin, it really enhances your features.

Peter: For me, I have a very day-to-night transition. Early in the day, I don’t really wear anything at all. Because the sunlight shows makeup. Unfiltered sunlight is the enemy of dreams. It really is. If you want to stomp all over Harry’s dreams just open a window.

Harry: It’s something that when you turn people on to it, they can never go back.

Peter: The only dangerous part about it is that you can wear too much. But if you’re not afraid of having a shiny face it’s OK.

Your MAC collection is designed to be worn by both genders. Though beauty icons are traditionally thought of as feminine, do either of you have a male beauty icon?
Peter: Brando before he got fat.

Harry: Yeah, but also, beauty icons and men is not really something that are in conjunction with each other. My male beauty icon would be David Bowie. Because he was really one of the first people to say, “fuck the gender.” He was beautiful, and he was celebrated for it. His face is so iconic. He is my absolute beauty icon, and I didn’t even think about it before this. From what society has taught us, you ultimately think of a woman.

How do you think your new line plays into the gender-neutral fixation happening right now in fashion and pop culture?
Harry: Truthfully, I really believe that makeup should not be for men or women. It should be for both genders. It’s ridiculous to me. It’s not like clothes.

Harry: The only reason why the line is called unisex is because men would feel more comfortable with it. We’re guys, you can sell makeup to guys. But guys aren’t going to go out and buy Nicki Minaj’s lipstick, even if it works on men. They just won’t.

Peter: And no matter how far we’ve come in blurring gender, there’s still a lot of societal norms that people need to follow.

Harry: As a kid, I felt that, I thought that men wearing makeup was weird. I went to an all-boys school, and that was taught to me. It was only until I starting getting into fashion that I was able to express myself with the way I dressed. I was always very eccentric in the way I dressed, and so was Peter. It wasn’t until we were allowed to express ourselves with our fashion and with our makeup that we were in a community where we were celebrated. People think we were never made fun of, but that’s not true.

Peter: The fact is, we just didn’t care.

Harry: I remember one year when I was going to the Dior show, and I had this jacket with all these different bells on it. Kids were walking by, and they just started laughing hysterically at me. I was jingling, but it was a magical jacket. I went to the show, and everyone was like, “that’s fabulous!” I wasn’t doing it to look attractive, I wasn’t doing it to look cute. It looks costumey.

Harry: For me, it’s like the relationship between the designer and the makeup artist is so important. It helps create the look. You ask any designer, and it’s so important, especially in a runway show.

Peter: Makeup is an extension of fashion onto the face. Each one is an art form. And it’s the closest we can get to making our physical beings fashionable, without surgery, dyeing something, slicing something, or cutting something.

At what age did you both start wearing makeup?
Peter: Around the age that you get acne, so, 15. That’s when you should do something.

Harry: Once you start to play with makeup, you realize you can use it in these magical ways to accentuate yourself. It’s the same thing about wearing jewelry, shiny things to catch attention.

Peter: Some people don’t feel comfortable unless they’re out with a big, shiny watch or high heels, and that’s the same thing.

What’s your favorite product from your collection?
Peter: The highlighter. This is like our secret formula. We guarantee it’s made with 10 percent more love than the next leading brand.

Harry: It’s very easy to use, and the contour is too. It looks like a shadow on your face. It doesn’t look like you have bronzer on. It’s light. Used with the highlighter, it really does look like your cheekbones are sculpted. It’s a very hollow look in your face, which I’ve always found very beautiful.

How did you learn to apply makeup?
Peter: Trial and error, and also, I still can’t do it right! It’s more like a science of visuality than anything.

Harry: There was a whole class at our school about the “golden proportion.” That was a thing that we studied, but we still apply it to anything. Art, architecture, people. There really are scientific things that the human eye finds beautiful, so for me, it’s always been about accentuating your face to make it the best possible.

Harry: There’s no such thing as not enough makeup. If you’re wearing a little bit, there’s no way it’ll be bad. I asked a very famous makeup artist backstage at the Versace show what to do if someone puts on too much makeup. She said that’s never a problem. The problem is when someone doesn’t do enough, because if there’s too much, you can always tone it down. If there’s not enough, that’s when there’s an issue. 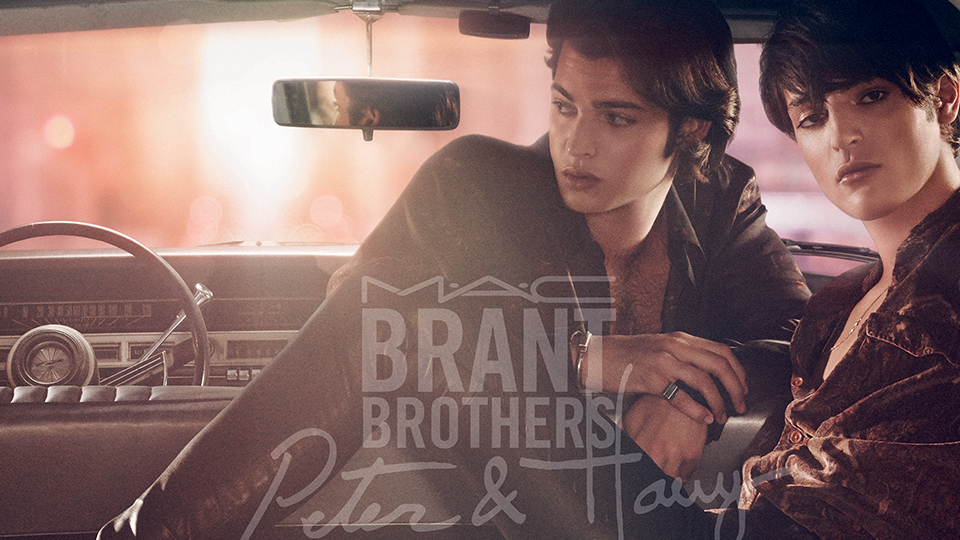