Gray creates the tight ponytail that
forms the base of this style.

It was an unconventional, yet beautiful hairstyle backstage at Norma Kamali’s S/S 2010 fashion show.

Redken lead stylist Peter Gray consulted with Kamali on the look she wanted for the show and concocted a very thematic hairstyle. “We talked about using the hair as an accessory,” said Gray, “So I came up with the idea of doing these braided hair hats.”

Gray started off by spraying hair with Fabricate 03 Heat-Activate Texturizer and Thickening Lotion 06 Body Builder to give the base of the style hold and texture. He then backcombed the hair to create a lifted look at the roots.

Next he created a tight ponytail that was placed on the top of head, but slightly off-kilter and to the side. The base of the hair was left loose, but the actual ponytail itself was tight. “You want these to stay, and if we started off with everything looking loose, nothing would actually stay up long enough,” he said. “It’s better to start off tight and make it looser.” 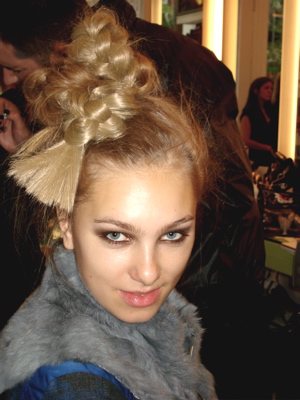 He took sections of extra-long hair extensions and braided each by hand to create two chunky, thick braids. These were then tied to the base of the ponytail and wrapped around the ponytail, which had been knotted up on the top of the head. The end result was a slightly akimbo coil of braids that, indeed, looked a bit like a small lady’s hat.

Gray wasn’t devoted to having each girl look the same — some models had two braids, some had only one and the configuration of the “hat” was never exactly the same. “We don’t want to create a bunch of Storm Troopers,” he said, “we wanted there to be some subtle changes between the styles.”

For the makeup look, MAC lead makeup artist Nadine Luke was inspired by the technology aspect of the collection. The show itself was held at the SoHo Apple store and Luke wanted to add that slick techno appeal to the makeup look, but also keep it grounded. “I wanted it to be tech-y, but with a human touch,” she said. She decided to create a slick, shimmery eye, but to do it using earth tones like brown, black and gold instead of the usual space-age silver. 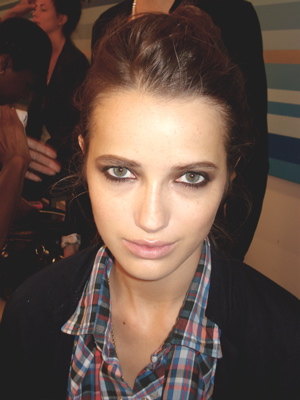 She started off by applying Eye Kohl in Teddy and Pearlglide Eye Liner in Molasses around the eyes and on the inner rims. She then used Mineralize Eye Shadow in Gilt by Association — a trio of marbleized shimmery black, gold and brown shades that launches later this month. This created a midnight brown sheen that was smoked around the entire eye and on the lid, extending slightly outwards at the outer corner of the eyes. She finished this techno-Earth gaze by applying “lots and lots of mascara” to the upper and lower lashes.

For the lips she created a nude pout with a twist. She applied the pale pinky-nude Fleshpot lipstick, then took a burgundy lip pencil and lightly colored in the inside, middle of the lip, creating a light stain at the center opening of the mouth with a halo of satiny, nude color surrounding it.

On the cheek she used Powder Blush in Peaches to contour the face and add some warmth, then swiped some silver dust on the cheekbones to highlight the planes of the cheek.