Back in March and April, it seemed like we were only going to be home for a few weeks—not an entire year (or more). Now, it’s time to get serious about doing some smaller beauty services at home. Luckily, brands are rolling out new and innovative ways to do our hair at home, whether that’s covering up gray roots or trying a fun fashion color. Brad Mondo’s XMondo hair color is for the latter group, those who want to have some fun with their look while also recording it for TikTok, of course.

Chances are, that’s where you know Mondo’s name and face from. The hairstylist is all over YouTube and TikTok with his popular “hairstylist reacts” videos. From allover bleach that quickly turns orange to extremely uneven haircuts, he’s seen it all. And his reaction, while sometimes shocked, is never mean. That’s what makes them so fun to watch. It only makes sense he would finally come out with his own hair color line. And it came out with a bang. He used it to create an innovative pink highlighted look on TikTok star Charli D’Amelio.

“I’ve been thinking about having a color line since I was very young,” Mondo tells StyleCaster. “I’ve always been involved in the hair care industry and working around so many different color lines and learning all about them, and then also learning how people do their hair at home through my reaction videos, I wanted to create that product that was a hybrid between professional hair care and an easy-to-use hair care line for the average consumer.”

He found that the only way to get healthier hair after coloring, is by doing multiple steps, using a bond-builder and a deep conditioner. With XMondo, he wants to give people an all-in-one, allowing them to keep the integrity of their hair while coloring it. They’ve added those bond-building ingredients (vegan ones!), along with oils and proteins, to help restore hair from the inside out and minimize breakage. 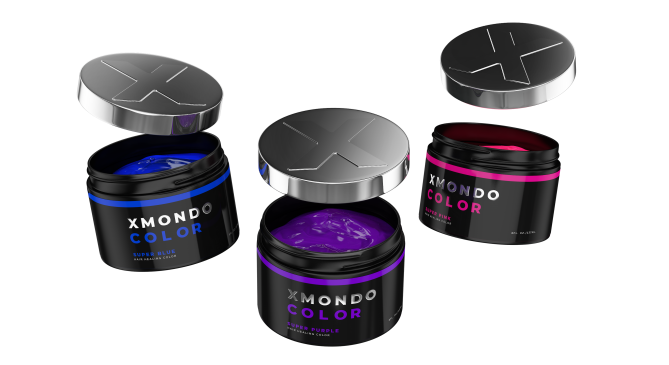 There are three shades to start with: Super Blue, Super Purple and Super Pink. The latter is what he used on D’Amelio. “Pink is a Brad Mondo color. I think a lot of people know me for pink,” he says. “It’s the most vibrant pink you could possibly find anywhere.” He’s been using the color in videos for a little while now and fans have been doing some serious speculating, wondering if it’s his new line.

“I’m glad we were able to do something out of the box, something she doesn’t usually have,” he says about working with D’Amelio. “At first, we were just going to change the color underneath her hair.” But then, she gave him creative control to do something even cooler. Folks on TikTok are already recreating it. And he’s reacting to those, of course. How meta.

But no matter how wild the transformations get and how many mistakes people make at home, he tries to always be kind to them. “I don’t want people to feel bad about something they said,” he explains. “I really do care about the people I’m reacting to and I know they’re going to see this video and I would never want them to be like, ‘wow Brad is an asshole.'”

Still, the worst videos he’s seen are the ones where people bleach their hair until it literally breaks apart and falls off. That’s actually the first video he’s ever reacted to. “I’ve only seen a handful of those videos, where it’s tragic,” he says. He understands that this long into quarantine, people are going to take their hair into their own hands but there are ways to minimize the damage.

“If you can lay off the bleach, I think that’s the best decision,” he says. “Bleach is one of the most difficult things to master. But using fashion colors—blue, pink, purple, red, whatever it is—using semi-permanent color, is great for at home. It washes out quick and is typically conditioning and good for your hair.”

Now you have Mondo’s permission to go crazy with color. Just don’t forget to tag him.