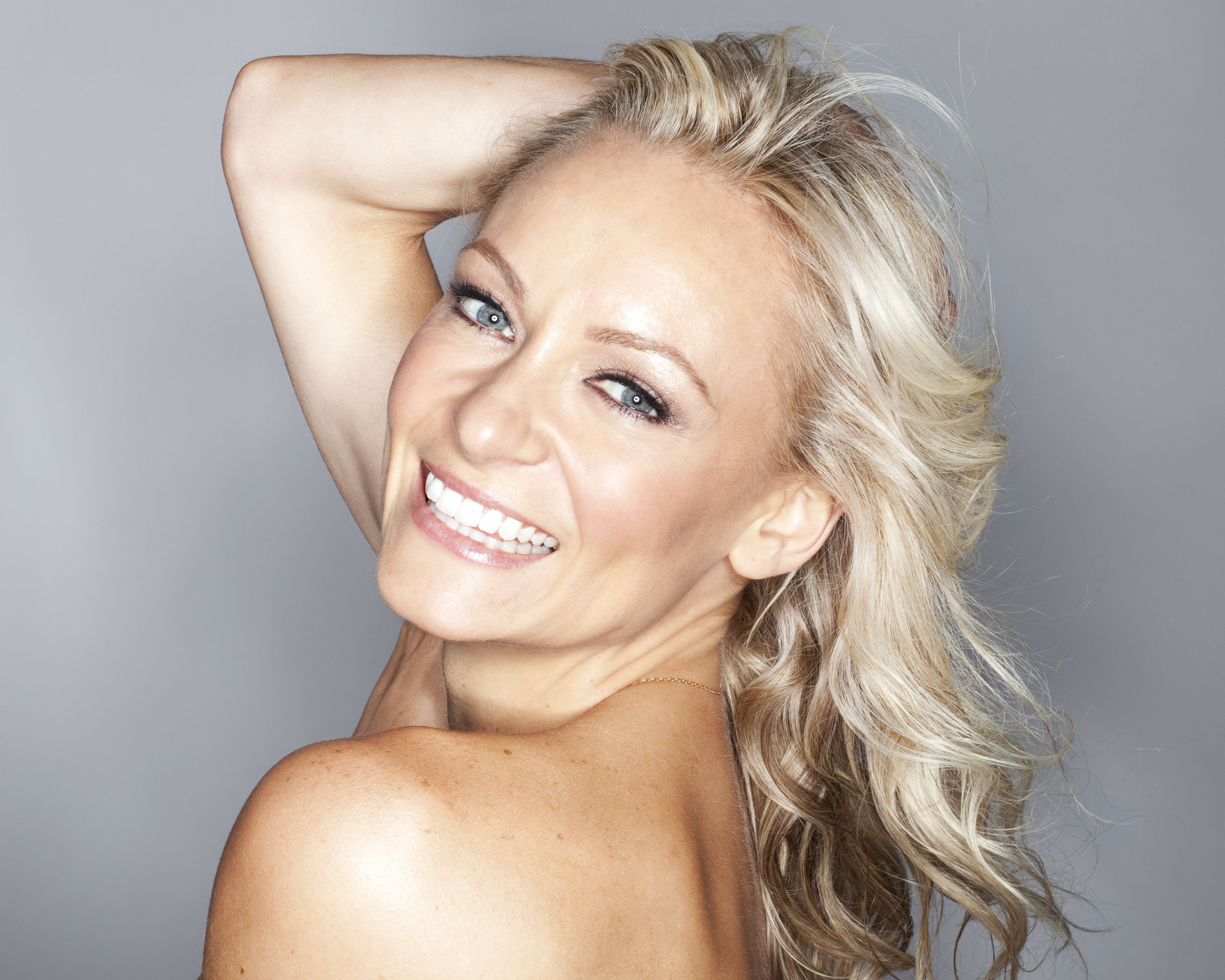 Image Courtesy of Body by Simone

For those of you unfamiliar with Body by Simone, the new fitness sensation created by fitness guru Simone De La Rue, let us be the first to tell you: this workout is legit. Simone’s high-energy, interval classes may currently only be available in New York and Los Angeles, the good news is that De La Rue is bringing her signature workout to a larger audience through a new book, Body by Simone , which is packed with fitness tips, motivational techniques, meal guides, and more.

We had the chance to catch up with (ridiculously fit) workout guru last week to hear all about her signature classes, her new book, and her partnership with Olay’s Ultra Moisture Bar (the main reason her skin can look so good amidst all the sweat!). Read on for her best advice on exercising, eating right, and keeping your motivation high throughout the year.

Beauty High: Tell us about your new book!
Simone De La Rue: It’s the Eight Week Total Body Transformation. It’s got three separate exercises for beginner, intermediate, and advanced. There are also mommy modifications in there as well. There’s a meal plan and there’s a cleanse. I don’t believe in diets, so it’s basically a two-week cleanse that detoxifies your gut. It basically resets your body, and then there are recipes in there based on the Paleo diet. Even though I don’t believe in diets and this is another diet, Paleo is a way of eating. And then there’s self-motivational tips in there and tools. It’s like ‘mirror minutes’ in there, where you connect with yourself and look in the mirror and it’s got playlists and I think it’s a really empowering book for women. It’s come out really well and I’m really happy with it. I just finished an experiment in LA with a big group of women who did “The Eight Week,” and they all lost, like, 3-4 inches. That was really fun to see the transformation.

As far as motivation goes, right now going into fall, motivation starts to kind of wane a little bit because bikini season is winding down. What do you suggest as far as keeping the motivation moving into fall?
As you said, we’re getting out of bikini season, but, you know, you still take care of your health. My belief is that it’s not a “fad” or a “quick fix.” It’s a lifestyle choice, so that you want to keep up. You want to get to your ideal weight, and then you want to maintain it. So you know, eat well up until Thanksgiving, have a day of splurging, and then eat well again after that up until, Christmas, have a day of splurging, and then the same for New Year’s. What I find even for myself is if I take more than like two days off exercising, it’s so hard to get back into it. It’s hard for your body, it’s hard for your muscles, it feels, shocked, but also mentally. You want to keep on track and maintaining is far easier than going hard and then stopping.

MORE: 10 Foods to Eat Before You Work Out

So when you talk about your ideal weight, how do you really go about finding that?
With the Eight Week, we saw a lot of people drop a lot of weight, and then you plateau a little bit, and then towards the end of the eight weeks, that’s where I think you find your ideal weight. It’s setting realistic goals, you know what I mean? And even though I’m tiny, I’m still not going to look like Calista Flockhart. We all have genetics and our parents’ background, and then you gain or lose one or two pounds on the side of that. But really, it does come to a point where if you feel yourself plateau, it’s like you’ve pushed yourself to the point where you’re actually working towards the goal in a healthy way.

A lot of people talk about tricking your muscles and figuring out a new way of exercising. What’s the best course of action for that?
With my method, all the classes are different. It’s like five different classes to choose from, and you know it’s not set. Where some other classes are set, we constantly change it up, and I need to be stimulated mentally. That’s how I approach it for your body to be stimulated as well. It’s always adding an element of something different, and I’m not one of those crazy people who says you can only do my technique and nothing else. If you walk one day, that’s great, and if you do Barry’s Boot Camp another day, that’s great. I’m not going be responsible if you get bulky though [laughs]!

Okay, so as far as food, what do you recommend for eating after working out? And maybe even eating before so that your workout is getting the best you can give it?
So an hour before [a workout], you should eat protein and carbs so that it fuels you and gives you the energy for the workout, and then literally within the hour after you finish working out, have a protein. You’re feeding the muscles and helping them grow, and then you’re keeping the metabolism firing. So whatever that protein would be for you—even if it’s just, you know, a celery stick and peanut butter, or some kind of turkey or yogurt and granola—that’s a good one because it’s carbs and protein. Or even a protein shake. The thing is to have it within the hour after exercising.

MORE: How to Tone Your Body Through Yoga

Tell us a little bit about your partnership with the Olay Ultra Moisture Bar.
Well, I travel so much in between so many different states, so I’m a multi-tasker. I don’t have a lot of time to take care of my skin and stuff, so the bar is actually great because it’s not large, and I can get past security traveling with it. I can just easily throw it in my gym bag because, you know, I work out five times a day, and I actually shower in between clients. So it’s hard to find soap that doesn’t dry your skin out, so this is actually really great because it has like ten times more moisturizers and it actually moisturizes my skin without me having to put on layers of moisturizer afterwards as well. Sweating with moisturizer feels gross, so it’s just really convenient.

So obviously you love exercise and this is your passion, but for people who really want to stay on course—and are maybe tired from a workout the day before—how do you suggest staying motivated?
Make sure of a few things: Make sure you write an exercise journal and a food journal, so then you look back and you’re like “Oh, I only exercised twice this week, that’s why I’m not feeling great,” or “I ate a few too many cookies.” Another thing is to get a girlfriend or a workout buddy because they’re going to keep you accountable as well, so if it’s 6:00 a.m. and the alarm goes off and you’re like “I really can’t do this,” they’re texting you saying, “No I’ll see you there.” Then you’re like ‘Okay. ’

MORE: What Juicing is Doing to Your Skin: An Expert Explains

In terms of cardio versus strength training, what do you suggest as far as how you should break up the week?
I’m a big believer in interval training because you’re going be burning calories throughout the whole hour. I would choose, like, one or two days a week focused mainly on cardio, but then in the other days there is toning. I always say to add in at least some form of cardio—at least do 10 minutes at the start of whatever that workout is. People just really need to do it—especially women. We’re not doing enough cardio. Yoga’s great, the Barre Method’s great, changing the shape is great, but you’re not actually getting the heart rate up enough to a calibrating state. You should start off at five or ten minutes, so then you’re going to burn throughout the whole session.

Why is it so particularly important for women to do cardio?
Just for our heart health, and I think as we’re getting older, our hormones are setting in as well, and it’s harder to shift the weight, and so really you have to do cardio to shift weight. It’s 80 percent diet and 20 percent exercise, so you do really need to watch what you’re putting into your body, but the cardio is what’s going help the weight drop off. It sounds cheesy, but you really do have to think about it as fueling your body.

It’s like putting gas in the car.
That’s what I said yesterday! If you don’t put good gas in, then it doesn’t run.