If there’s one thing you can say about the ultra-talented Billie Eilish, it’s that she is never boring. And Eilish’s Grammys beauty look for 2020 is no different. The 18-year-old hit up the red carpet with an entire Gucci ‘fit, all the way down to her green nails. She’s up for four huge awards tonight, including Record of the Year, Album of the Year, Best New Artist and Song of the Year. She’s also taking the stage to perform. To be honest, it’s hard to believe this is her first Grammy Awards.

Eilish is one of those stars who aren’t afraid to try something creative with their hair or makeup and start a trend. Just look at the singer’s neon-green roots. Now, everyone wants to add some neon to their hair to be half as cool. Plus, she debuted that modern mullet, which somehow didn’t look silly at all. She’s only been on a handful of big red carpets in her career and each is iconic in its own right. (Who can forget her sparkly veiled hat and head-to-toe Burberry ‘fit at November’s American Music Awards? So. Good.)

Tonight, her usual neon-green roots are intact and they’re a perfect match to her custom Gucci outfit. 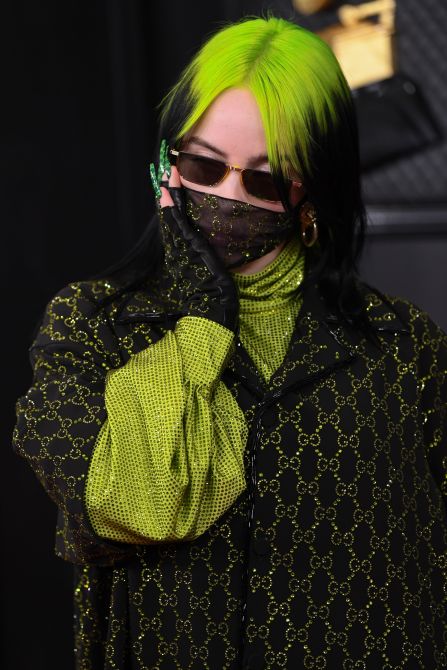 We can’t fully see her makeup because of those killer glasses but we can see her major green nails.

They’re ultra-long and square, like she likes, and printed with the Gucci logo. We can’t wait to see what she wears to perform.