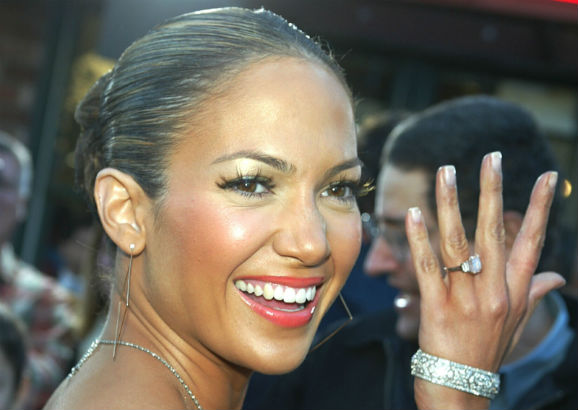 Some say you should spend three months salary on engagement ring. Others, says two months. However, because of our celebrity-inundated culture, in recent years it seems the bigger the bling, the better. Hey, most of us don’t have George Clooney’s budget for the $750,000 sparkler that he presented to Amal Alamuddin, but most couples seem to want to stretch their budgets as much as they can to at least try and compete.

MORE: How to Find a Unique Engagement Ring: A Complete Guide

But should we be trying, is the question. A recently released study entitled “‘A Diamond is Forever’ and Other Fairytales: The Relationship between Wedding Expenses and Marriage Duration,” surveyed 3,000 adults in the U.S. who had once been married to a member of the opposite sex. Men who spent between $2,000 to $4,000 on an engagement ring were 1.3 times more likely to get divorced than those who spent between $500 and $2,000. It should also be noted that those who spent less than  $500 on a ring led to higher divorce rates as well, so this isn’t an excuse to totally cheap out.

Spending extravagantly on the wedding also didn’t bode well for couples in the study. Women who spent more than $20,000 on a wedding divorced 3.5 times more frequently than those who spent between $5,000 and $10,000.

MORE: There’s an Engagement Ring Box With a Hidden Camera to Record Your Proposal

Overall takeaway? Don’t get caught up in all of the wedding hoopla (now a $60 billion industry in the U.S., by the way) and overspend when it comes to that engagement ring, or the wedding. It really doesn’t matter one bit.

Are you surprised by the results of this study? Share your thoughts in the comments!