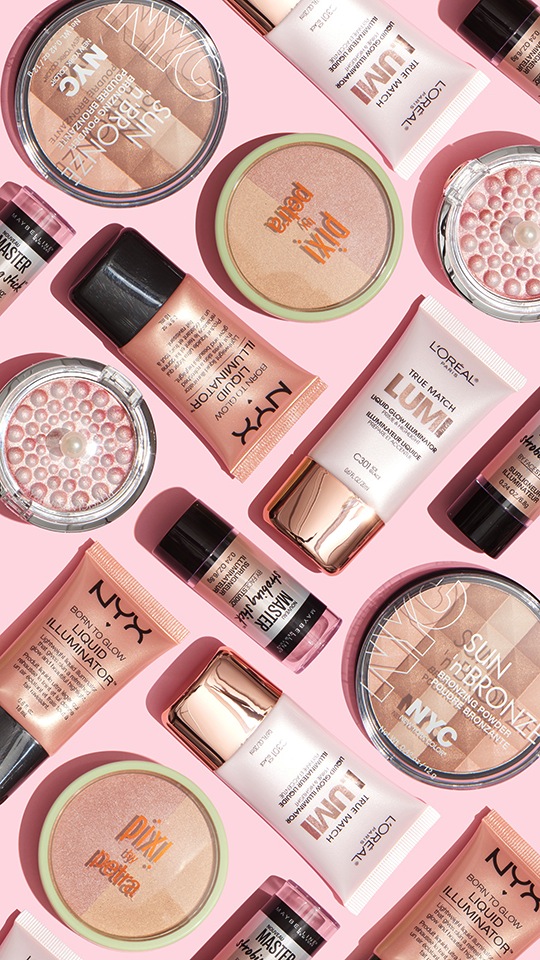 True story: A photographer taking my headshot recently cocked her head and said, “Hmmm … you’re a little shiny.” She understandably looked baffled when I told her I aim to glisten. Really: I’ve spent a fair portion of my makeup-wearing life searching for how to achieve that elusive lit-from-within glow. We all want it, and we’ve all—at some point or another—tried to get it by slathering on shimmering, glitter-filled potions that promise a J.Lo glow, but end up making us look like an escaped, slightly deranged stripper. Wait, is that just me?

The truth is, there’s a good reason for craving dewy skin—not only does it look feminine and natural, but plump, hydrated skin is a marked sign of youth—something we all want. The good news: You don’t have to be a 15-year-model, have Jenny from the Block’s makeup artist on speed dial, or chug 100 liters of distilled water a day to get a perfectly illuminated glow—you can hit your local CVS, too.

In the latest installment of our Drugstore Smackdown series, I’m road-testing six cheap highlighters and crowning one ultimate winner. 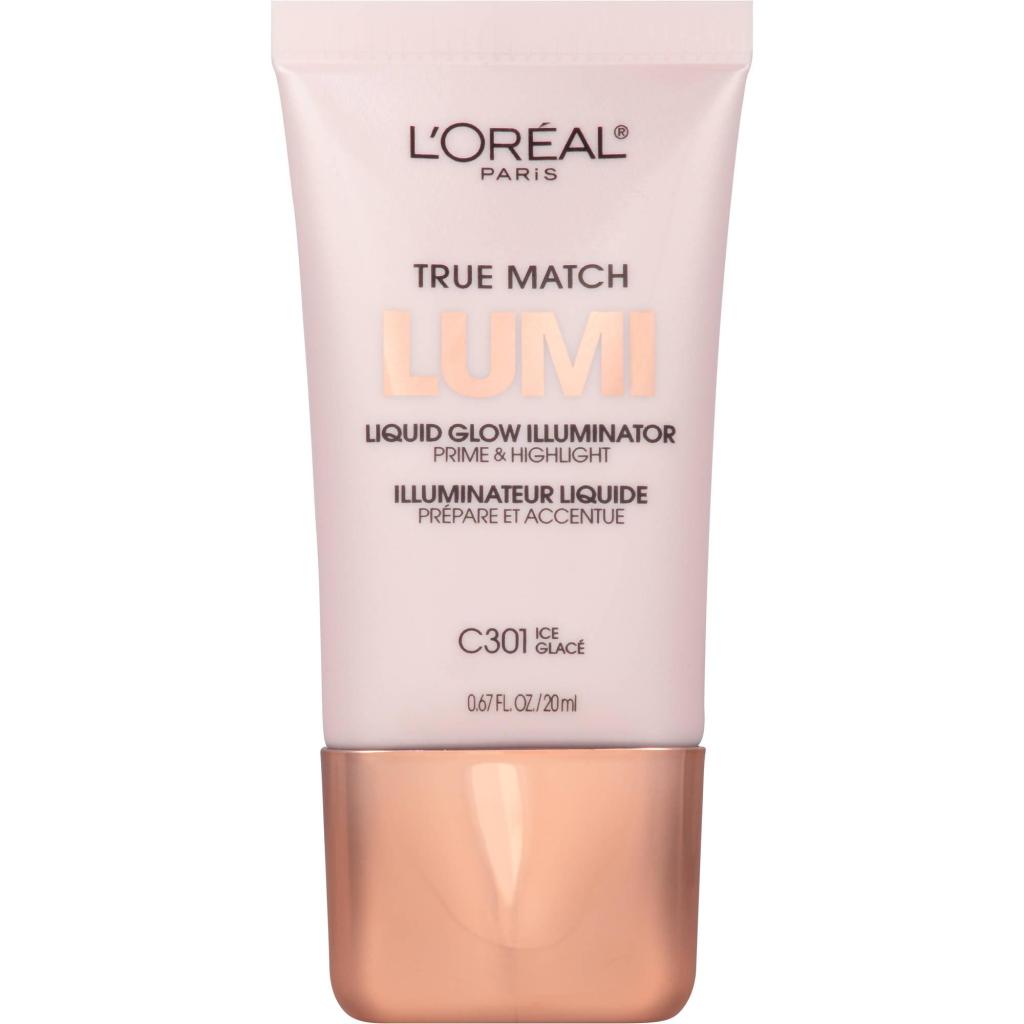 I’ve always been partial to liquid highlighters and thought there’d be an abundance on drugstore shelves, but—spoiler alert—there aren’t. I chose the lightest shade I could find—Ice is a pearlescent pink very much in line with Benefit’s beloved High Beam—and started by dabbing a pea-sized amount on my cheekbones after I’d applied foundation and bronzer.

The pros: It definitely shimmered in a J.Lo kind of way—we’re talking finely milled glitter, which I quite like, but I’m aware that’s not for everyone. It’s thin enough that it’s easy to blend, but I found it didn’t sink into my skin the way I would have liked, and I didn’t think it highlighted as well as it shimmered.

However, when blending it with foundation, I was totally sold. Bottom line: I found it to be less of a spot highlighter than a gorgeous way to add dewiness to makeup or even moisturizer. 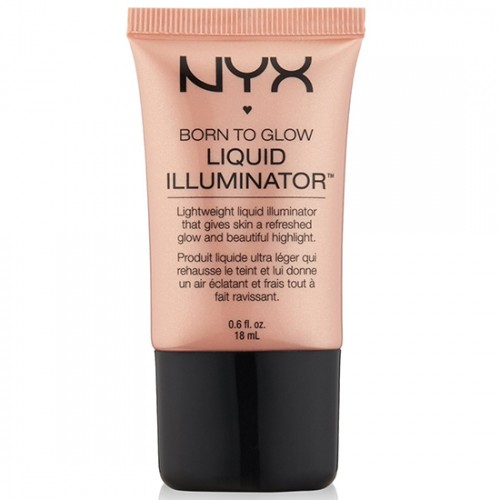 Given the fact there are only two measly liquid highlighters in mass drugstores, I had high hopes for version number two, a thinner, tanner version of LUMI. I’m a huge fan of NYX as a brand, and while I appreciated how smooth and blendable this was, I found the shade—called Gleam—to be a little rusty on its own. I also thought it was a little too “I just applied some shimmer to my cheeks!” so I mixed it into foundation after a day at the beach but still thought it skewed a bit orange-brown for my skin tone, but I will say that this guy stays put. No giant gripes here, so I’m interested in opting for the brand’s lighter shade next time. 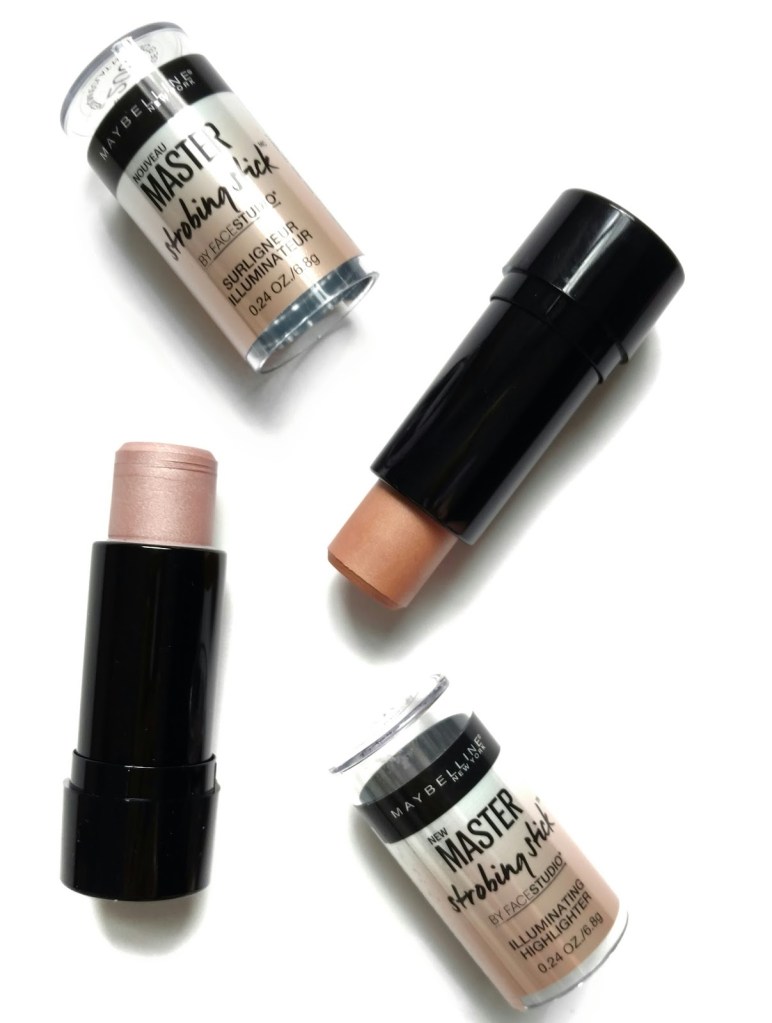 Not gonna lie: They had me at “strobing.” During the last few months, I’ve been dabbling in the highlighting technique, mostly thanks to Hourglass’s excellent Ambient powders and strobing sponge and was intrigued by Maybelline’s brand-new stick formula.

Firstly, the package itself is pretty mini—we’re talking travel-size mini, which didn’t bother me personally—less stuff to carry around—but some online reviewers took issue with the small amount of product given. I think they’d change their tune once they played with the stuff, because—unlike most drugstore makeup—a little goes a long way with this guy.

The formula is gorgeous—creamy, finely milled, and pearly rather than glittery. I found I just had to tap it on my skin to get a smooth, dewy payoff with a light powdery finish, which I didn’t expect from a cream stick.

I used light Iridescent (a soft, pearlescent pink) but the stick also comes in Medium Nude Glow, a warm golden champagne. Basically, I felt like a Kardashian while using this—in the best way possible. 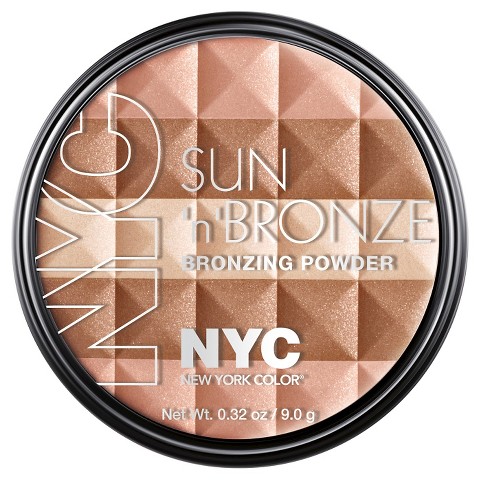 Admittedly, with the next three products I tried I took some liberties, thanks to the paltry amount of actual highlighters on drugstore shelves. Each isn’t explicitly marketed as such, but all shimmered from here to high heaven, so I figured they could pull double duty in a pinch.

Speaking of shimmer, I was drawn to this bronzer like a child is drawn to an “ooh shiny” toy—even in this flat photo, the shine is visible. My instincts paid off, because as a bronzer, it created a too-thick sparkly mask on my skin, but as a spot highlighter, well, it kind of rocked.

The bonus is that there are three shades—pearl, pink, and bronze, so I found myself trying each separately, brushing them on my cheekbones and my nose with a thin blush brush. Granted, the powder isn’t as fine and blendable as I’d have liked, but in a pinch, it’ll do. 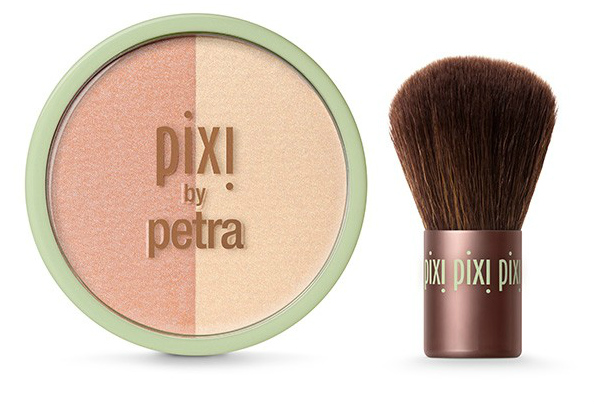 I can talk to anyone who’ll listen about underrated Pixi as a brand—I love and use its makeup and skin care religiously—and decided to turn this shimmery, nude blush into a DIY highlighter. Armed with my damp Hourglass strobing sponge, I stippled across my cheekbones, down the bridge of my nose, and in the corners of my eyes. I didn’t see much difference the first time around, so I kept building until I noticed a very sheer, marginally glowy layer—but barely. For minimalists or neophytes, this powder might be a godsend, but I wanted a little more oomph. 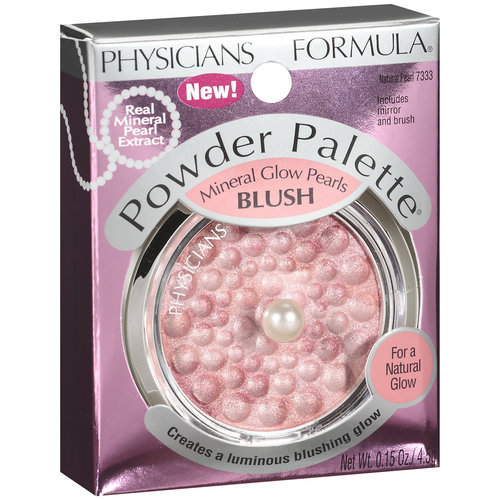 This particular product is a bit of an enigma—it’s delightfully luminous, so in my opinion, would work better as a highlighter than a blush—but it’s made with varying shades of pink so each time I’d apply it, the darker shade separated from the lighter one, leaving behind shiny mauve patches. Still, I wasn’t ready to give up on the stuff.

A method I found that worked was to mix the powder with a little MAC Strobe cream or regular moisturizer to fuse the varying shades together, then apply like a liquid highlighter. A decent work-around, no? I still felt the dark pink was a little too dark for my light-medium skin, but it wasn’t a total wash—my friend, who happens to be about four shades darker than me, took it home with her after July 4 weekend because it suited her olive skin beautifully.

🌟 🌟 🌟 Maybelline Master Strobing Stick—I was crazy impressed with both the formula and the payoff, and haven’t stopped using it. Go buy it! 🌟 🌟 🌟