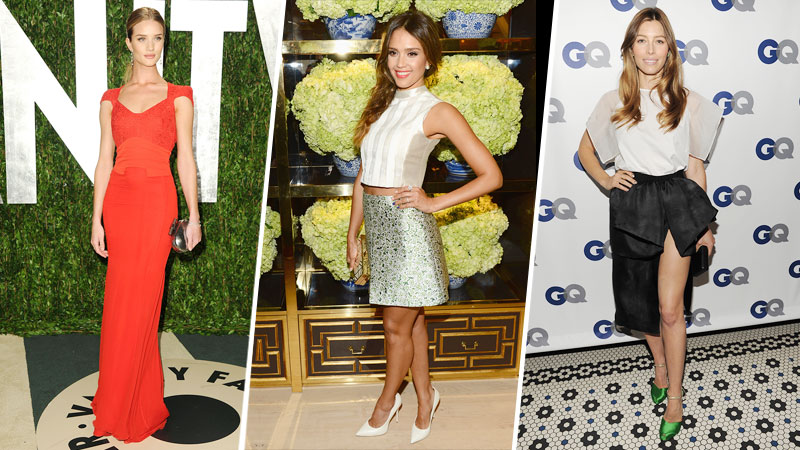 We all know celebrities maintain their bodies with a little—nay, a lot—of help from folks like personal trainers, private chefs, professional aestheticians, and maybe even a plastic surgeon or two. But that doesn’t necessarily mean they won’t still practice more attainable habits to preserve their killer physiques.

In the interest of seeing what some of the world’s most beautiful women do to keep fit—and maybe even get in shape for spring ourselves—we’ve rounded up 27 diet and exercise secrets from super-svelte celebrities.

1. Wear a corset to flatten your stomach like Jessica Alba
Alba confessed to Net-A-Porter’s magazine The Edit that she had difficulty bouncing back, body-wise, after giving birth to her two children Haven and Honor. “I wore a double corset day and night for three months. It was sweaty, but worth it.” she said. “It was brutal; it’s not for everyone.”

2. Nix gluten like Miley Cyrus
Since her “Hannah Montana” days, Miley has changed quite a lot, but apart from her image, her body also has gotten noticeably thinner and more toned. When people started buzzing the she’d adopted an eating disorder, Miley responded by saying that her weight loss was due to a switch to a gluten-free diet and regularly doing Pilates—evident by her super-lean, strong frame.

3. Kale, kale, kale like Gwyneth Paltrow.
To drop fast weight before promoting “Iron Man 2,” Paltrow doubled up on sessions with trainer Tracy Anderson (her real diet secret!) and stuck to a strict eating plan, which she outlined on Goop. In a nutshell: Every morning, she drank a glass of kale juice after her workout, then had a low-carb Mountain Valley wrap for lunch, and then turkey kale soup for dinner. She also allowed herself a glass of kale juice and a few almonds in the afternoon. Check out her full plan here.

4. Try the Alkaline Diet like Elle Macpherson
The gorgeous supermodel (aka “the body”) told the Daily Star she follows the Alkaline Diet, which involves eating mainly alkaline foods like fresh produce, roots, nuts, and legumes in order to keep the body’s pH between 7.35 and 7.45.

5. Cut down on red meat like Rosie Huntington-Whitley
The supermodel told Vogue Australia that while she loves food, she recently cut out a lot of red meat, since she didn’t crave it anymore. “And since I cut it out I have noticed how much lighter and better I feel. It’s not that I wouldn’t [ever] have it, I had lovely lamb chop the other day on the barbecue, it’s just changed. And I’ll have fish or chicken.” 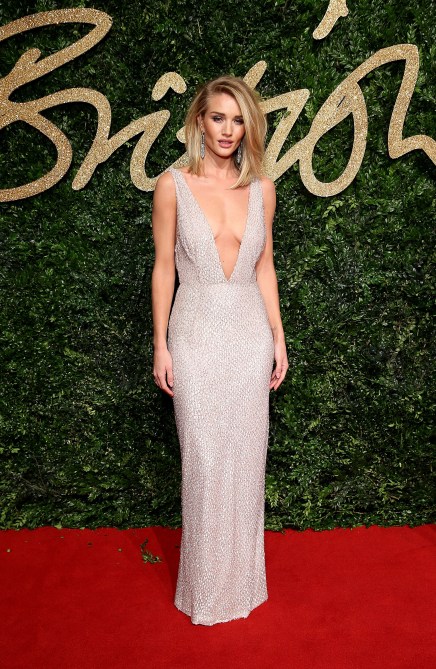 6. Don’t fear the weights like Michelle Obama
“You don’t have to be a weightlifter,” FLOTUS wrote while guest-editing iVillage. “I know a lot of women get worried about muscle definition. But actually, I’ve been told by fitness experts that the average person will not bulk up on the weights that we can lift. You want to have some weight training in your routine, especially as women, to make sure we’ve got strong bone density. And it helps with that toning, those little areas that we don’t like that flap a little bit, that aren’t as tight. That’s where lifting comes in, once you’ve gotten your cardio in there.”

7. Do yoga for long muscles like Jessica Biel
“Yoga is a constant for me because it keeps my muscles long and flexible,” she says. “But now that summer’s coming around, I’m planning on spending more time outdoors playing volleyball and jogging with my dog, Tina,” the ultra-toned actress told Elle.com in 2011.“

8. Memorize calorie counts like Kate Hudson.
“My friend Ginnifer Goodwin told me about this app MyFitnessPal, and then I got obsessed with it, because knowledge is power. I memorized everything, so if anything gets on the table, I literally know how many calories it is. The greatest day of my life was when I realized a small piece of pizza was only 150 calories. I was like, That means I can have three slices for a meal!” Hudson told Self.com.

9. Ditch the dairy like Megan Fox
After having her first baby in 2012, Megan Fox admitted that she didn’t work out much afterward, but did stay away from dairy. “I’m not eating dairy, that’s my biggest secret,” the actress told Hollyscoop. “It’s really hard on your hormones and it’s not good … If you want to gain weight, eat dairy. If you don’t, don’t eat it.”

10. Don’t starve yourself, says Naomi Campbell
“I don’t believe in starving myself. I’ve never done it, and I never will,” Campbell told Shape. “I’m even more active when I’m juicing, doing both yoga and Pilates every day.” She said her eating plan is clean, and she starts the day with hot water with lemon and an intense yoga session. 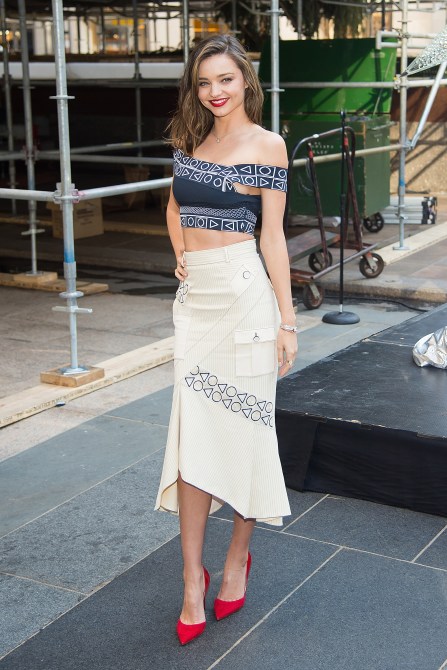 11. Have sex like Miranda Kerr
The gorgeous model—who split with hubby Orlando Bloom last year—told GQ magazine in March 2014 that the lack of sex is making her lose her muscle tone. “One thing I’ve noticed is now that I’m having less sex my body isn’t as toned,” she says. “The more sex I have, the more defined my arms and stomach get.”

12. Rely on green tea, ballet, and … vodka like Carine Roitfeld When we asked the iconic fashion editor, 58, how she stays so slim during an interview last year, she was as honest as honest can be. “I’m very low key with my body because I don’t diet … I drink green tea all day long, and at night I drink vodka. So each night, I have my vodka. I’m not an alcoholic, but I do love vodka. And then I do ballet. French women—we eat everything. In America, you don’t eat this, you don’t eat that. In France we are not like that. We have an easier way of eating.”

13. Only eat 5 ingredients like Eva Mendes
The sexy star reportedly lost 15 pounds with the five factor diet, which consists of consuming five meals daily, each of which consists of five ingredients. The target ingredients include protein, unsaturated fats, fiber, carbs and a drink containing no sugar. Oh, and there’s a cheat day.

14. Follow Dr. Joshi’s plan like like Kate Moss
It’s been widely reported that the supermodel—among other stars like Cate Blanchett—is a fan of Dr. Joshi’s 21-Day Holistic Detox diet, which allows you to eat only a specific list of non-acidic foods during 21 days.

15. Squeeze in workouts like Rihanna
When she’s on the road, the singer tries to squeeze in at least three workouts a week, at least 25 minutes a day, her trainer Harley Pasternak told People StyleWatch. But once settling into one location, Pasternak says she “increases her workouts to five days a week and bumps her cardio to a total of 30 minutes a day from 10.” 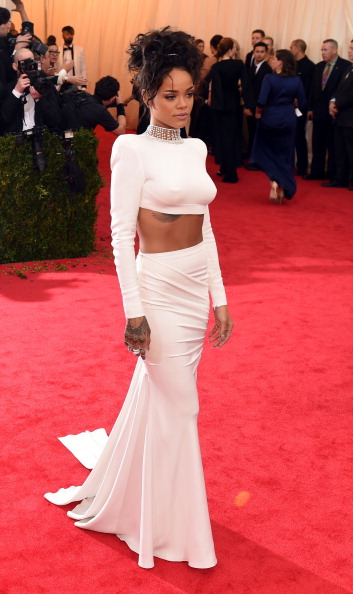 16. Choose what’s worth it Like Minka KellyTalking to Self.com, the “Friday Night Light” actress said she’d rather indulge her sweet tooth than try to satiate it with impostors. “I don’t feel like dinner’s done unless I have a sweet. I’d rather go for a small slice of real chocolate cake than a bunch of sugar-free cookies. It’s all in moderation.” Minka also revealed she watches Beyoncé videos while working out for inspo.

17. Give into the neuroses like Gwen Stefani
“I try not to be but I’m super-neurotic about diet. I’m neurotic about trying not to be neurotic! I’m like every other girl. I’ve had to try really hard my whole life to be fit. I’m super-vain. And I want to wear cute clothes,” the singer told Us Weekly.

19. Try Atkins like Kim Kardashian
“Fifteen years ago, I tried the Atkins diet with my dad and we both lost weight really quickly,” she said. “And I’m still doing it. I still have my cheat days, but when you’re breastfeeding you can’t really starve yourself,” Kim told People after giving birth.

20. Be an 80/20 eater like Jillian Michaels
“The Biggest Loser” trainer Jillian Michaels told Health magazine that eating well doesn’t have to mean swearing off everything you love “Make “80 percent of the food you eat healthy and take 20 percent of your daily calories and make them fun.” Otherwise,  you’ll feel deprived—never a good sign when trying to establish better habits.

21. Adhere to the Blood Type Diet like Kate Upton
The model’s trainer Justin Gelband told Self that he suggests the Blood Type Diet, which finds the best nutritional plan based on your blood type.  “Your blood type has a lot to do with the way your body digests, processes, and metabolizes food,” he said. “The method is 90 percent accurate.”

22. Stick to Weight Watchers like Ginnifer Goodwin
Goodwin told Health magazine that she’s followed Weight Watchers since she was nine years old. “I have been a member of Weight Watchers for 23 years and I’m back on it right now, “she said. “It’s the only thing on the planet that doesn’t dehydrate you or just make you miserable,” she continues. “I’ve never had a dramatic weight problem, it’s just that I tend to indulge, and then I need to get back on track so I can button my pants.”

23. Color coordinate like Christina Aguilera
Aguilera reportedly got her body in prime form thanks to the “color diet,” which only allows followers eat foods of one specific color every day. For example, Monday would be white foods—so you could only eat things like cauliflower and white beans. Uh, do colored M&Ms count? 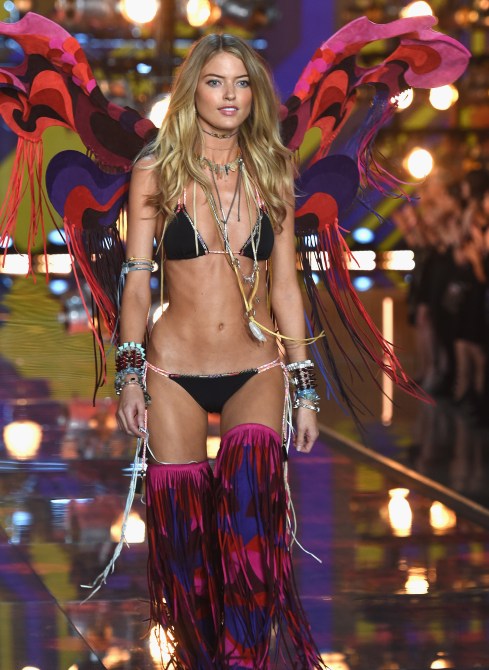 24. Try out the Megaformer like Martha Hunt
“I’ve been using a Megaformer—it is like the Pilates reformer with a carriage between two platforms, and you change the springs for resistance—so you have to resist these pulleys to strengthen your body. It is basically a torture machine!” Hunt told us.

25. Push the wine bottle away like Meryl Streep
Even the world’s best actress still needs to shape up for certain roles. In order to play a high-level, super-slim fashion editor in “The Devil Wears Prada,” Meryl Streep told People that she swam and she said “I have been pushing the wine bottle away—at least after the first glass. I have to fit into these clothes.”

26. Drink lemon juice like Jennifer Aniston
We all knoe Jen credits her famous body to the Zone diet, but it’s also been reported that she starts every day with a glass of freshly squeezed lemon juice to flush out her body.

27. Go green like Elsa Hosk
Victoria’s Secret Angel Hosk told us she gets in shape before stripping down by drinking more green juices. “It’s a lot of fun to make juices and I also drink lots of warm water in the morning with ginger, cayenne and lemon juice. It’s a great way to clean your system right away…Just drink lots of juice and get lots of sleep.”