It would be cliché to say that Bella Thorne is our spirit animal, but then again, Bella Thorne makes even clichés look and sound cool, so we’ll stick with it. Because the 19-year-old actress doesn’t care (no, like, she really, truly doesn’t care) about what we think of her, and she’s just livin’ her life the way all young, free-spirited, and financially #blessed kids do, which includes dyeing her hair every fifth day, holding wild pigs on tropical beaches, and saying screw it to traditional beauty norms and testing out some new and interesting makeup choices on Snapchat.

This morning, while all of us were just barely struggling to wake up and ingest coffee, Thorne was posting a video to Snapchat of her newest going-out makeup, which she calls the “half and half,” as she captioned on the picture. Instead of her usual nude shadow with thick-as-hell lashes, Thorne traced copper glitter eyeliner around her right eye and teal glitter eyeliner around her left eye, smudging the lines out for a smoky, shimmery look. And, oddly, it looks kinda cool? Not that it matters, of course—Thorne can do what she wants to do, but we’re digging it nevertheless. 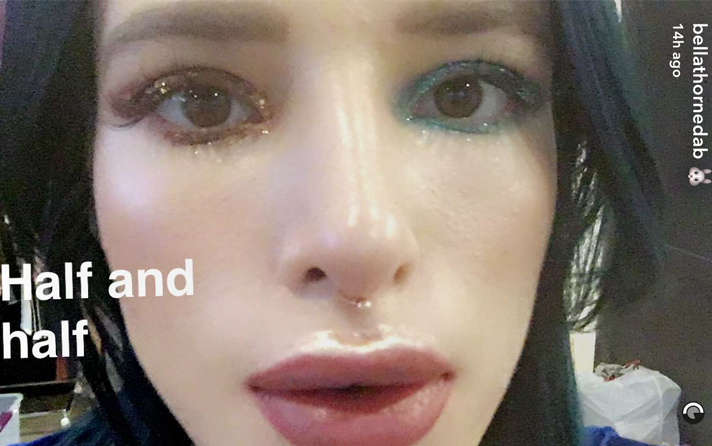 (We flipped the photo to save you the neck ache, btw.) And, if you want to try the look on yourself at home, just grab two glittery eyeshadow sticks or liquid liners, like Urban Decay 24/7 Glide-On Pencil in Goldmine and Deep End, and trace your upper and lower lash lines with thick, deliberate lines. While the liner is still semi-wet, use your ring finger to gently tap and smudge the liner outward to get a hazy, smoky, glittery finish. Then just snap a few pictures of yourself, become a movie star, and BOOM! You’re basically Thorne.