Thanks to Los Angeles’ salon closures and stay-at-home orders, I haven’t gotten highlights in months. That’s probably why I’m loving Bella Hadid’s new hair that feels like both a current look and a throwback style at the same time. When I saw Hadid’s orange highlights photos, I was pretty surprised since the model usually keeps it pretty simple. She was spotted on the streets of New York with her hair pulled back so the chunky highlights were on full display.

It’s a bit hard to see her new hair color in these street style photos, but she also showed off the hue on Instagram. Plus, she shot a series of photos in which she’s licking show, shot by Renell Medrano. Her hair looks much more ginger there, making it seem like more than just highlights. It’s very possible these are two different hair colors. Her chunky Christmas highlights could be different from this strawberry blonde wig. Either way, she’s definitely feeling red hair this season. 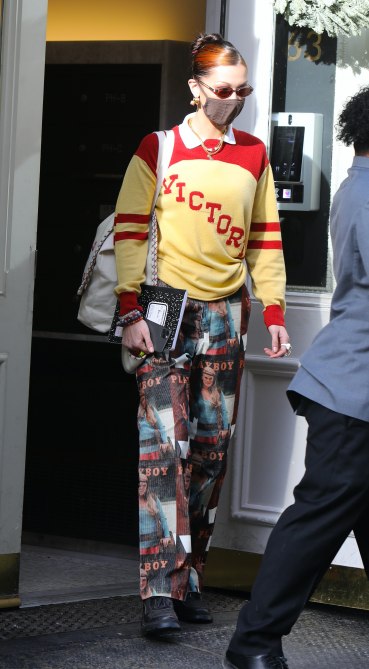 Friends and fans are obsessed with the new hue, calling her ginger with “Jessica Rabbit vibes.”

After years of highlight trends going more and more natural-looking, it seems we’re heading back to the early-2000s’ heavy, high-contrast color. It’s likely we’ll see this on younger celebrities who were too young to love Jessica Simpson’s popular chunky highlights in 2005. (Bella Hadid was born in 1996.)

Since I was a teenager during that time, I’ll probably tread lightly into the throwback trend without going as drastic as Hadid. Money pieces and overall more contrast is a nice change as we head into 2021.