Uh, in case you missed it, tonight was the 2017 Met Gala—a.k.a. the Rei Kawakubo Comme des Garcons: Art of The In-Between Costume Institute Gala, if you’re into long names—and pretty much every single celebrity and model showed UP. Between Zendaya’s gorgeous, brushed-out curls, Kate Hudson’s bright-white topknot, and Rihanna’s fuchsia cheekbones and temples, we’re not sure which beauty look we’re in love with most. Or, we weren’t sure, at least, until Bella Hadid showed up with an insanely short, sleek, and ridiculously gorgeous angled lob, promptly stealing all of the love we had in our hearts.

The lob was the creation of hairstylist Ward Stegerhoek, who chopped a few inches off of Hadid’s long waves, giving longer, shoulder-bone-skimming layers around her face, with shorter layers in back. And, of course, a center part, because the ’90s, right? And we’re not the only ones who love it: Hairstylist and semi-hair queen Jen Atkin posted a video of Hadid’s ridiculously shiny cut with the caption, When that new new haircut is on POINT @bellahadid!! Haircut by the incredible @ward_hair” with a bunch of star and clapping emojis.

Hadid also commented on her new hair in an Instagram about her hair this a.m., writing “When @inezandvinoodh @gb65@ward_hair ask you to cut your hair for your new @vogueitalia cover …the answer is yes! And not [sic] better carpet to show it off than the MET! Thank you for an amazing night Anna @voguemagazine and of course my amazing date @alexanderwangny 💋💋💋 i love you @jenatkinhair @1maryphillips@elizabethsulcer.” So clearly Hadid is having a pretty excellent week, what with new hair, a new Italian Vogue cover, and a new throng of fans desperately wanting the same hairstyle.

Could this be the next major hair trend of 2017? Uh, we’re sincerely hoping so, because Bella looks bomb. And if it’s not, then hey, who gives af? Take a picture of Hadid’s face to your hairstylist and demand the cut anyway. We support you. Scroll down to see more inspo-worthy images of Hadid’s new lob! 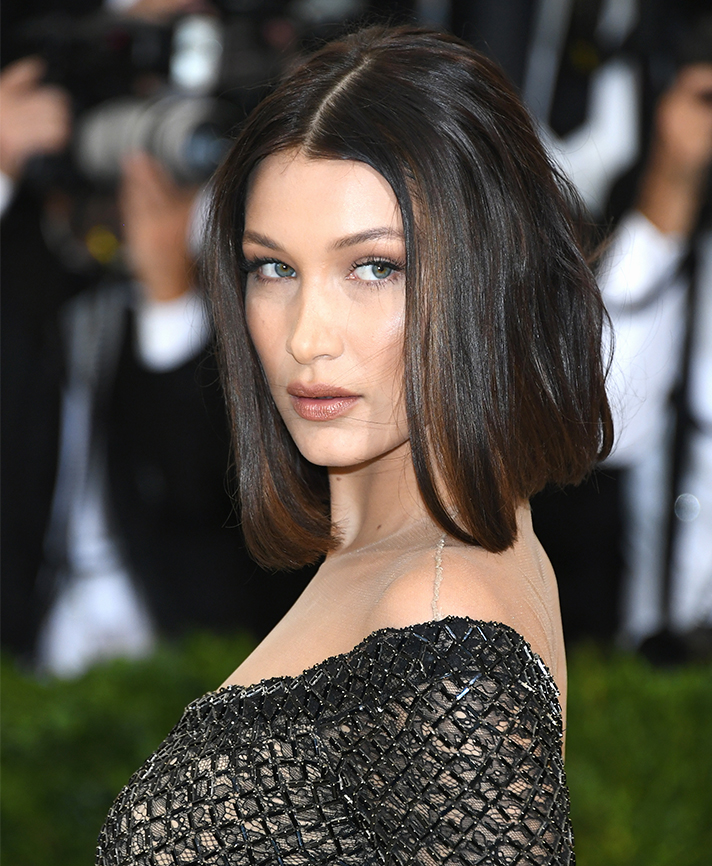