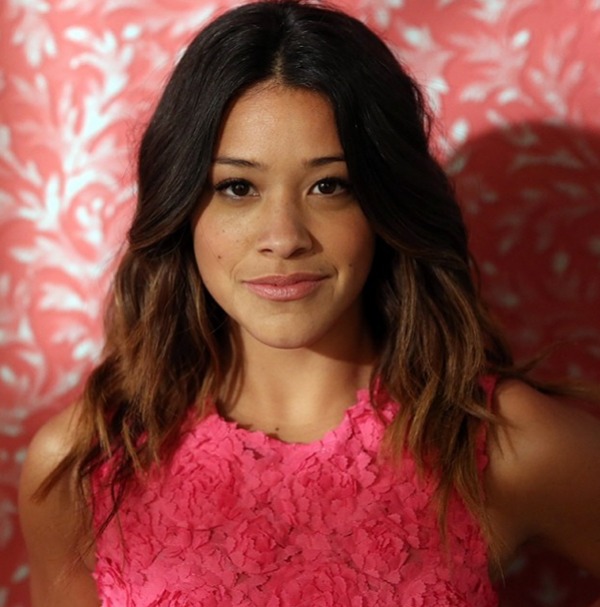 With two Golden Globe noms, ‘Jane the Virgin’ has secured its place as one of the must-see new shows of the season. And if you’ve been following along with the new series, you know that the character hairstyling game is spot-on. Constructed to fit Jane’s personality, lead actress Gina Rodriguez often appears on the show wearing a natural, laid-back, and carefree look that’s said to mimic her character’s sometimes stressful daily life.

“Gina’s character Jane is very natural, busy, no fuss and full of life. So we keep her style true to that essence; alive and fun. She works a lot, so her hair undergoes a bit of stress,” explains set stylist Michelle Rene Elam. Often, that look consists of her longer locks set with a slight wave. So how does she get that cute look that doesn’t scream salon team?

Elam starts by treating Gina’s hair with a heat protectant spray and then creates the tousled waves with a curling wand before flat-ironing near her roots. “She has a copious amount of hair, so I often flat iron the roots with my T3 Singlepass styling iron to keep it snug to her head,” she says.

To keep her hair set and perfectly in character during a full day of shooting, Elam utilizes treatment oil instead of starting from scratch. “I keep Moroccanoil treatment oil and White Sands Orchids Oil close by to tame any wildness and give that extra sheen. Some days Oribe Supershine Light Moisturizing Crème is needed when her hair is extra tired. I seal her with Aerogel Styling Spray or Moroccanoil Luminous Hairspray Medium,” says Elam.

When Gina’s character Jane wears a ponytail in the show, Elam reaches for a holding spray and a wooden brush to fight the fly-aways—a tip we can all take into consideration!

Will you try out Gina Rodriguez’s ‘Jane the Virgin’ hairstyle at home? Check out the show finale tonight on The CW at 9/8 c.