Ashley Benson has snacks on the mind and we don’t blame her. Benson just revealed her tiny milkshake tattoo on Instagram. The Pretty Little Liars actress has upwards of 14 tattoos but she hasn’t revealed them all. Instead, she gives us little peeks here and there, inspiring us to get some ink (when it’s safe again). Seriously, we have every tattoo she has bookmarked because they’re just that cute. This new one is no exception.

Benson posted the tiny milkshake to Instagram stories crediting tattoo artist Nene. The black tat is on her forearm next to a star and a piece of writing that reads “Grammy,” in honor of her grandmother. This new one resembles a diner milkshake complete with a cherry and vintage-looking straw. There’s even a ton of whip cream, making it look really realistic. The detail here! The shading! Benson knows her tattoos so it’s not surprising she would pick such a cute one to add to her collection. 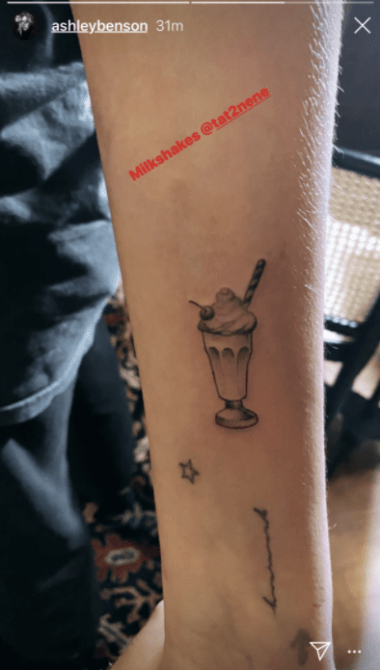 This isn’t Benson’s only snack-themed tattoo. Nope. What goes with milkshakes? Fries, of course. Back in February, tattoo artist JonBoy posted Benson’s latest ink, “POMMES FRITES” written on her opposite forearm. Benson has the right idea when it comes to snacks, that’s for sure.

It seems Benson mixes up emotional tattoos (such as the one for her grandmother) with the fun ones. When Pretty Little Liars wrapped, she and the cast all got tiny finger tattoos with the initial of their character. That means, she likely has an “H” for Hanna Marin—as long as it hasn’t rubbed off. Finger tattoos sadly don’t last forever.