Ever since Ariana Grande’s Victorious days, there’s been just as much talk about her hair as her killer voice. More specifically, it’s her super-long ponytails and the few-and-far-between times she wears her hair down. Grande’s new video for her song “In My Head,” seems like a bit of a dedication to those famous ponytails. The video was produced and directed by Vogue as part of Grande’s August 2019 cover. It’s the next video from her Thank u, Next album, and different from “Imagine,” “7 rings,” and “Break Up With Your Girlfriend, I’m Bored.”

The first shot of the video shows Grande wearing her signature ponytail, though this one might be the longest we’ve ever seen on her. She dances around and sings in what looks like a white box. At about 30 seconds in, her thigh-high boots start dancing on their own, joining two other pairs. Next comes some “Gucci tennis shoes” dancing on their own, and then three of her ponytails. It’s a little creepy, but cool too. 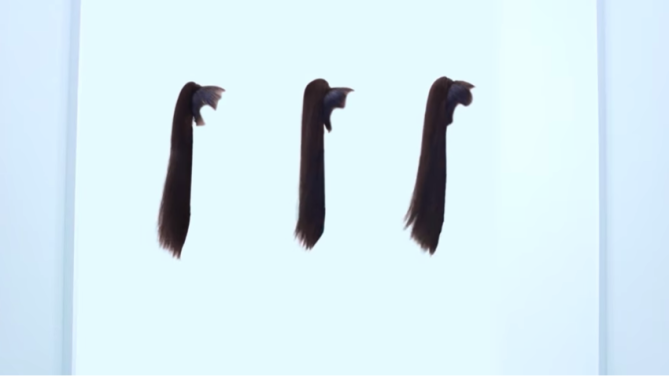 Grande’s hair is courtesy of her longtime stylist Josh Liu. He used faux hair from Indique Hair, Whatwigs and Insert Name Here. The latter is a new brand from co-founders Jordynn Wynn and Sharon Pak who met while working together at Colourpop. Their affordable faux hair line is a bit like Colourpop for your mane. The ponytail Grande is wearing? It’s Miya, a synthetic extension made with realistic-looking Japanese fibers. It comes in 12 shades and retails for just $45 on the INH website.

Now you can get Grande’s glam look for under $50 but her neck strength? You’re on your own with that. Watch her entire video, below.