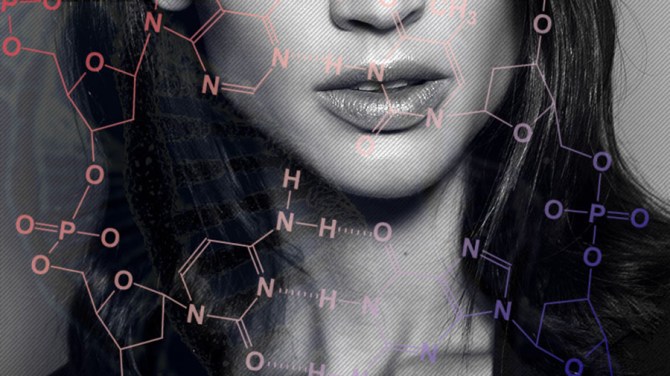 Drink water, slather on that SPF, moisturize, keep exposure to pollution and the sun to a minimum—there’s tons of tips out there that are said to help in the attempt to prevent fine lines and wrinkles. We know that eternal youth isn’t possible and nothing will permanently stop all wrinkles from forming, but an ounce of prevention is worth a pound of cure when it comes to anti-aging and your skin.

But what if anti-aging skin care had more to do with your genes than with how you care for your skin. What if your genetic fingerprint dictated—and predicted—how you’ll age? A new Olay study in coordination with personal genetics company 23andMe indicates that could be the case.

This study found that some especially young-looking women, classified as “Exceptional Skin Agers,” have a unique genetic fingerprint that plays a role in how good they look. About 2,100 of their genes are essentially working harder and more efficiently in areas associated with younger-looking skin!

Turns out, we all have these genes, but the expression was reportedly increased in the group that looked a lot younger than they actually were.

MORE: How Your Tech Is Aging You Faster

The Study
The Multi-Decade and Ethnicity (MDE) study was an attempt to discover just what happens to your skin as you age, and how that affects your appearance. To do this, they gathered 350 women belonging to four different ethnic groups and in a variety of age ranges from their 20s through their 70s.

To identify the Exceptional Skin Agers in the study, they started with a visual analysis system that depicted the subject’s perceived ages. If a participant was perceived to be 30 but she was really 55, she would then be categorized in the exceptional skin ager group. They then looked at the way these women’s genes were expressed to make sure it wasn’t all just coincidence or a really good makeup day.

These genes also positively affected skin’s moisture barriers and antioxidant levels. In the Exceptional Skin Agers, the genes that controlled these skin processes were functioning at an overactive activity level compared to those with average skin. This could be why they hadn’t experienced as many physical signs of aging.

She told us that in the average woman, these types of biological processes naturally start to slow down in their thirties. However, in the exceptional agers, these processes kept going as if the women were still in their twenties.

But it wasn’t all about the fingerprint: because this study focused on a variety of women, they were able to note differences in aging trends across ethnicities as well. Dr. Neuser notes that one interesting finding was that African American women tended to age about ten years slower, both in terms of appearance and in the biology of their skin.

“If you look at the gene expression, it seems to just lag ten years behind that of the Caucasian woman,” she told us. “So what changes, biologically, in the Caucasian woman in her forties doesn’t change in the African American woman until her fifties. She keeps youthful-behaving skin for longer,” she notes.

Was It Something Those Women Were Doing?
Generally, Dr. Neuser says she believes women become aware of the first signs of aging in their late twenties or early thirties (antioxidant productions tends to drop in the late 20s, she notes), but we were curious to find out if these Exceptional Skin Agers were doing something special to get their genes to behave in that way. Were they eating fruits and veggies? Applying eye cream every night? Staying out of the sun?

“We need to find more Exceptional Skin Agers to really answer that question very definitively,” notes Dr. Neuser who says Olay’s partnership with 23andMe will help identify the roles that both nature and nurture play in aging and prevention.

Can a Product Really Help Your Genes Behave Like an Exceptional Skin Care Ager?
Maybe! The study found that certain ingredients could help stimulate the expression of certain genes associated with younger-looking skin. “Once we saw the genes that are expressed more accurately and working harder [in the Exceptional Skin Agers], we compared that with data we have on the active ingredients we’re already using. Each of those ingredients gets tested in skin cell cultures, and we record which genes they can affect,” she notes. “What we did was overlay those two pieces of information, and we saw that we’re already using many ingredients that affect some of those genes that are important to look exceptionally young.”

The ingredients of note–including Niacinamide, pal-KTTS, Olivem and Lyslastine—were found in Olay’s Regenerist Micro-Sculpting Cream and could “shift the skin cell fingerprint of average skin (in vitro) to behave more like the skin of Exceptional Skin Agers,” according to the study.

In layman’s terms, they could make your skin behave like it’s an Exceptional Skin Ager—even if it’s not.

The question Dr. Neuser says they are facing now is how to make these products even stronger and identifying even more ingredients that could help and change your skin’s behavior.

What Can You Do?
Since not all of us are going to be able to casually dissect what our genes are doing, Dr. Neuser says its important to develop healthy, preventative skin habits like using sunscreen and moisturizing. Keep doing what you already know is good for you!

She also notes that it might be helpful to study your ancestry or take an ancestry test like the 23andMe analysis so you’re aware of your DNA and what you’re potentially predisposed to. “It’s putting the knowledge and the power into your hands,” she says. “You know exactly who you are, where you came from, what your biology is, and that will help you to make better choices.”

Is Personalized Skin Care the Future?
All this talk of genetics and ethnicities and their predisposed skin behavior got us wondering if personalization of skin care at the genetic level—not just the shade of your foundation—is in the future. Will skincare products and makeup be formulated for specific age ranges and specific ethnic groups?

In Dr. Neuser’s opinion, personalization is a realistic thought. “I really think the future is ultimately personalized skin care,” she told us. “And I don’t necessarily mean everybody has their own unique skin care products—I mean taking into account your ethnic background, what’s in your genes, what’s your lifestyle, what is your age, and then having products that really take that into account.”