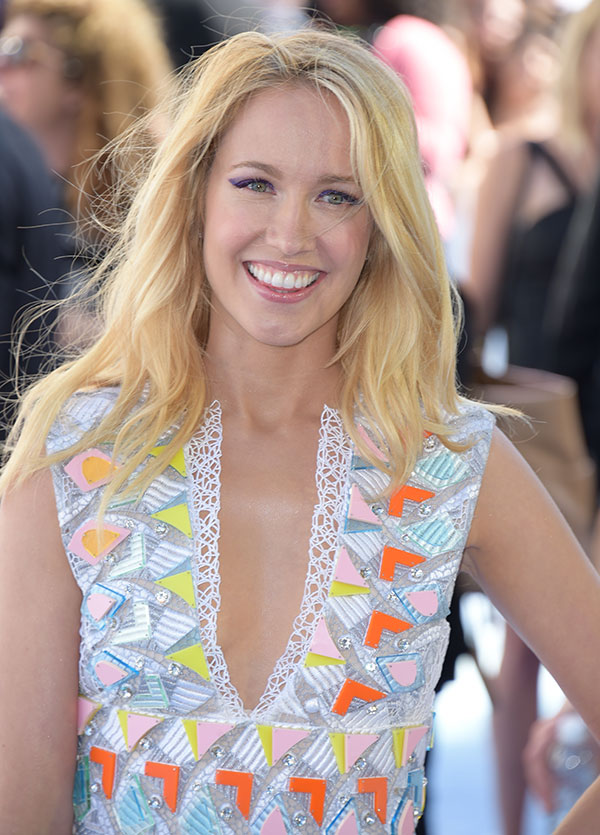 The cat-eye on the red carpet isn’t unexpected or even that shocking, but give it a graphic, 60s-inspired shape and try it out in purple, and you’ve got yourself a totally unique look that we’ll be dying to recreate. That’s what Anna Camp wore to the MTV Movie Awards last night, upping her game even more by pairing the winged look with colored mascara to match.

To get that complimentary mix of purple, not to mention that flawless wing shape, celebrity makeup artist, Melanie Inglessis, lined Anna’s top lid with the MAKE UP FOR EVER Artist Liner #1-90 in Iridescent Electric Purple, winging it out to her crease. After the shape was established, Inglessis layered the MAKE UP FOR EVER Aqua Liner #8 in Bright Purple over the original liner. “These two liners together created the perfect texture and color,” voiced Inglessis when speaking of Anna’s awesome look.

MORE: Winged Eyeliner Tips for the Perfect Swoop Every Time

The finishing touch and unlikely twist that really made this look pop was that Inglessis coated Anna’s top lashes with purple mascara, instead of a few coats of the midnight black mascara we usually reach for to complete a look.

The rest of Anna’s look was all about a sunkissed complexion and glossy nude lip. Because the rest of the look was relatively simple and rather natural (i.e. a peachy, summer glow), the mod eyeliner felt balanced and modern. To give Anna’s skin some glow, Inglessis prepped with a MAKE UP FOR EVER Skin Equalizer Radiant Primer and contoured with the brand’s Sculpting Duo which also features a highlighter that was added to Anna’s brow bones, the inner corners of her eyes, and the cheekbones.