She’s back, baby! After rocking natural gray hair the entire season, the finale of And Just Like That… features Miranda Hobbes going back to her roots — her red roots. The season finale of the Sex and the City reboot dropped Thursday on HBO Max and fans have a lot of feelings — a lot of which are around Cynthia Nixon’s Miranda’s hair. There’s a sweet scene between her and her son Brady (played by Niall Cunningham) in which they discuss her new (old!) look.

“So were you ever gonna say anything, about my hair?” Miranda says to Brody. She’s headed to the airport to see new love interest Che Diaz (Sara Ramirez) in Los Angeles. “Yeah, it’s cool. What happened to all the gray pride?” Brody replies. Miranda says it’s “still there” and she “just felt like changing it up again.” It’s a departure from this natural hair color journey we’ve seen throughout the season but not one that’s unwelcome. It feels just as natural for the character to want to feel like her old self again. (Plus, the color looks incredible on her.)

“Thought you were just copying my look,” the red-headed Brody says, joking with his mom. 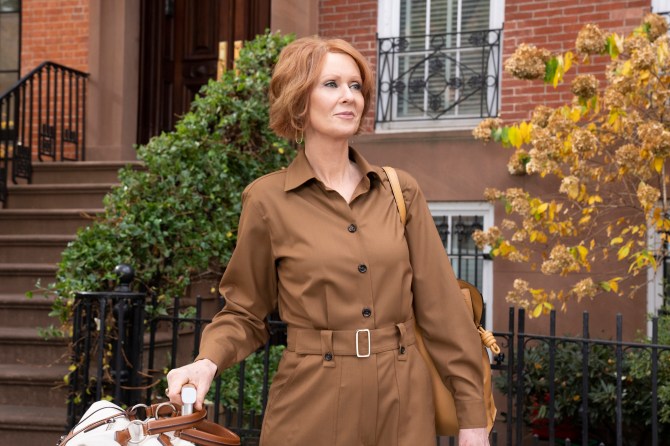 There’s been non-stop discourse about how the stars of the show — all women in their 50s — look compared to decades ago. Some are said to look “too old” while others have “too much work done” or something in the middle. Unsurprisingly, this conversation never happens with shows starring men.

Back in December 2021, Nixon went on Live with Kelly and Ryan and discussed her character’s gray hair. “The newspapers were breathlessly reporting that some of you were sporting gray hair,” Ripa said to her. In response, Nixon explained how it made sense for the character. “Right. Well, Michael Patrick King who is our chief writer and director, he was like, ‘You know, a lot of women during the pandemic, they couldn’t get out to the beauty parlor and they decided to go gray and then they decided that they liked it. So if it was going to be one of the women, we think it would be Miranda,'” she said.

Ripa herself sported gray hair and liked the way she looked — regardless of what others thought. Hopefully, someday a woman’s choice to let their gray hair come through won’t be such a big deal.