The U.S. topped the list as the country with the highest calorie intake of any in the world. The average calorie consumption per day in the U.S. is 3,770 calories, followed by Austria with 3,760, and Italy with 3,660.

On the flip side, the average caloric intake in India per person per day is 2,300, and a very low 1,590 in the Democratic Republic of Condo. Keep in mind that it’s long been suggested that women consume about 2,000 calories per day, while men should aim for 2,400. 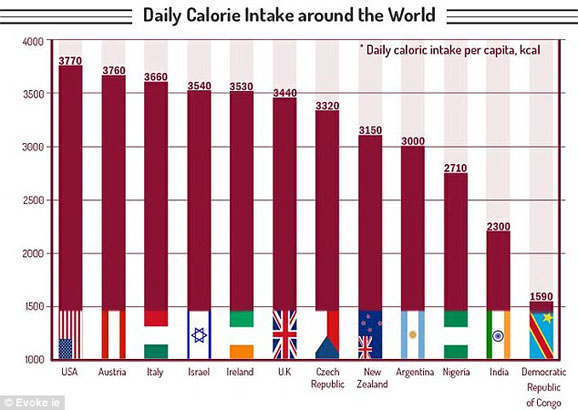 The results are troubling, but not exactly surprising, given that an estimated third of the U.S. is now obese. The epidemic has spurred Michelle Obama to center her time as First Lady around her Let’s Move campaign to solve the childhood obesity problem, and lawmakers have increasingly been eying food manufacturers as part of the problem. Still, the col hard numbers are a tad hard to take, this is not a list any country would want to top.

Let us know what you think in the comments below!