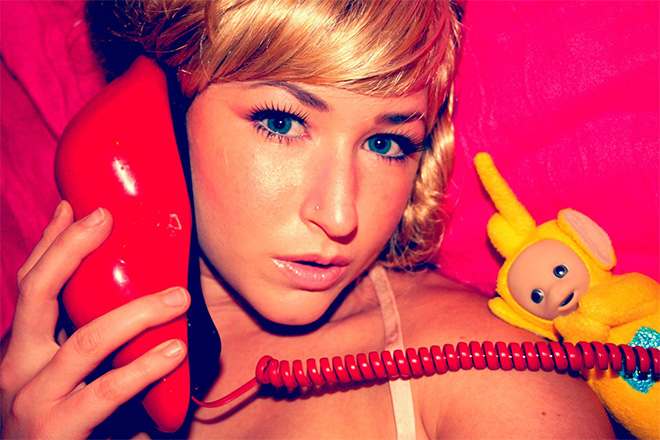 Artist Louise Orwin explores the “Am I pretty or ugly?” YouTube meme in a new show.

In case you needed another reason to be glad you’re not a teenager anymore, here’s one. On YouTube, a meme has cropped up among young teen and pre-teen girls who post videos of themselves asking, “Am I pretty or ugly?” The girls encourage commenters to rate them, and the anonymous responses their videos receive are as cruel and nasty as you might expect. There have been thousands of these videos posted online. So why would anyone do this?

That’s exactly the question London-based artist Louise Orwin is posing with her new project, Pretty Ugly, based on the online trend. After initially stumbling across “thinspiration” communities on social media sites, Orwin became interested in the way that today’s generation of girls expresses themselves online. Her research led her to the “pretty or ugly” YouTube genre, which baffled her at first. She writes on her blog:

“I tried to imagine posting such a video myself. I too have spent years obsessing over my face, my weight, my ‘image’ — but this means that the idea of appealing to such an audience of faceless stalkers on YouTube to rate my appearance is truly horrifying — almost masochistic. If you have a look at the comments posted below the videos you will see that many of these girls have been subjected to cyber-bullying, or ‘trolling‘. So why do it? Are these little girls so brave? Or is there something else going on underneath? Peering through fingers clasped over my eyes I wanted to know.”

So the 26-year-old artist created a series of her own “pretty or ugly” videos in which she portrays different 15-year-old characters, including an emo girl named Becky and a “nerdy” girl named Amanda. “I got torrents of abuse,” Orwin tells Wired UK. “People were telling me to f*ck off and die.”

Orwin estimates that the average age of the girls in “pretty or ugly” videos is between 9-13 years old, which is disturbing for a few reasons. That age is the time when girls are most impressionable and prone to low self-esteem, and also the time when their peers can be the cruelest. Even more worrisome, Orwin’s videos, in which she made a point of revealing her age as 15, received many private messages from adult men with creepy requests, such as “I think ur pretty. Don’t let anyone tell u any different OK. Can u do a dance vid so I can see more of sexy u?xx”. In fact, she found that 70 percent of the comments and messages she received came from men, most of them older than 18.

The artist’s show chronicles the posting of her own videos and the interactions she has with commenters online. As for what she hopes to accomplish with the show? “I need to show how irrelevant that question [“am I pretty or ugly?”] should be. Would you go up to a person on the street and ask them that?” she tells Wired. “It’s about changing attitudes towards things and teaching girls to take responsibility for themselves online.”

Am I pretty or ugly? Louise Orwin explores this YouTube phenomenon [Wired UK]