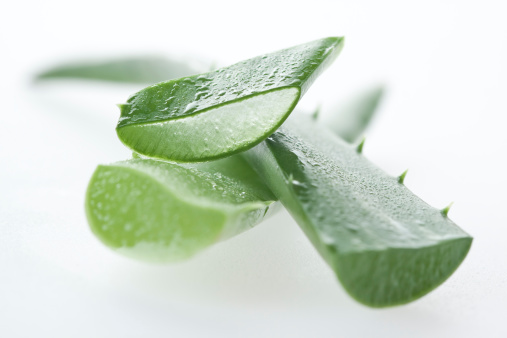 You already know aloe can soothe a sunburn, but it turns out that the plant can be a hefty part of your year-round beauty arsenal. According to experts, aloe can give you a slew of benefits, whether you slather it on or drink it. Side bar: People have been using aloe since ancient times, with the Egyptians being one of the most cited cultures for utilizing the plant as a remedy.

So, take advantage of six little-known ways that the green goop can do your body—and skin—good.

It Eases Dry Skin
Packed with vitamin E, aloe can act as a powerful moisturizer, according to dietician and nutritionist  Elisa Zied, author of Younger Next Week: Your Ultimate Rx to Reverse the Clock, Boost Energy and Look and Feel Younger in 7 Days. There’s even some evidence that the plant can help manage the skin condition psoriasis, and serve as an effective treatment for dandruff.

It Lightens Stretch Marks
Stretch mark remedies like Revitol include aloe vera as a key ingredient because it’s full of vitamins and minerals (like calcium, magnesium, zinc, selenium, iron, and vitamins A, B, C, and E, just to name a few), as well as anti-inflammatory agents. The compound may also stimulate cell regeneration, smoothing those lines caused by weight gain (or loss).

It Fights Aging
Drinking aloe has been shown to decrease facial wrinkling, improve skin elasticity, and increase collagen production. “Why this happens is still unknown,”  Zied says. “But the beneficial anti-aging effects may be due to positive effects it has on the immune system.”

It Reduces Body Fat
In one lab study, aloe vera helped reduce body fat accumulation in rats that had diet-induced obesity. While it’s unclear whether drinking aloe would have the same effect on humans, it’s certainly a possibility.

It Helps With Acne
Aloe’s healing properties have been known to soothe pimple-ridden skin, particularly when it comes to reducing scars and redness. The gel can also heal pimples themselves, according to user reviews on Acne.org, though many say the process, while less trying than typical acne remedies, is also a bit slower.