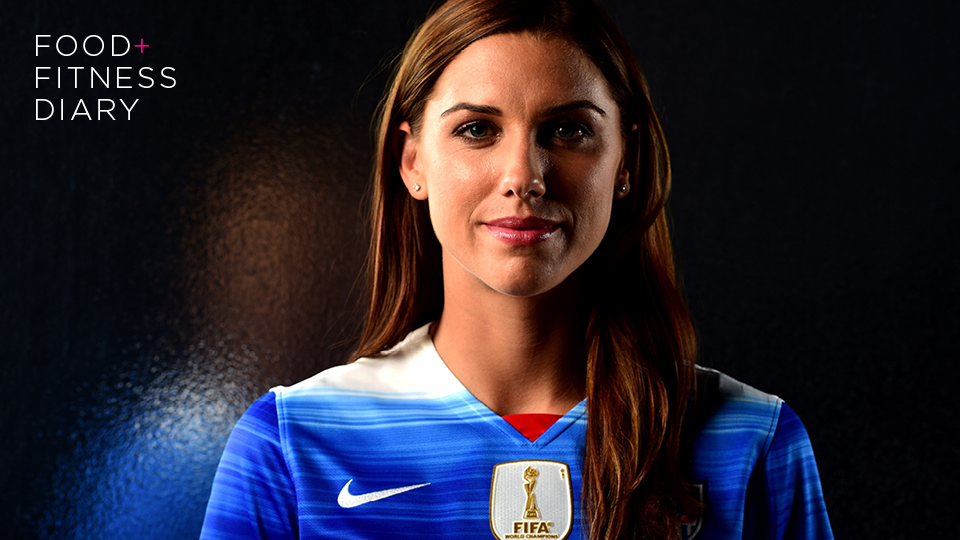 Last month the pay gap issue hit headlines again, after five key members of the world champion U.S. women’s national soccer team accused the U.S. Soccer Federation of wage discrimination. According to “Today,” when the women’s team took out the World Cup in 2015, they only took home $2 million in prize money to be distributed to the players and the organization. Meanwhile the men’s team, earned $9 million, despite failing to actually win anything. (As an FYI, Germany won the men’s cup, and they took home a mind-boggling $35 million.) Keep in mind that a record 26.7 million people in America tuned in to watch the women’s team crush Japan in the World Cup final, and they’ve taken home three straight Olympic gold medals and three World Cup titles. Also keep in mind that the guy’s team hasn’t won either.

Alex Morgan is one of the most vocal female athletes on the national soccer team on the issue of equal pay, and is one of America’s most prominent advocates of women’s sport. She’s a bona fide sporting superstar, sponsored by everyone from Nike to Chobani, and became the youngest player on the national team at the 2011 FIFA Women’s World Cup when she was just 22-years-old. She then went on to score the winning goal at the London Olympics in a semifinal game against Canada the following year, and hit headlines every year.

So with the countdown to the Rio Olympic Games officially on, we chatted with Morgan to find out the food and fitness plan she’s following right now, the biggest issues she sees facing women in sports, and a couple of her favorite healthy recipes.

The biggest issues facing women in sports right that I’m most passionate about are: The [gender] pay discrepancy and the fact that FIFA isn’t paying as much attention to women. Also, the fact that we play on turf, and the men have never played any international major tournaments on turf, they play on grass. We need to get more women in higher positions in FIFA, and to grow the women’s game globally.

I’m preparing for the Rio Olympics by: I’ve been playing with my club team in Orlando for most of this year so far [Orlando Pride], and with national team we’ve had more than 10 games togethers so far, right now, so just continuing to have good games and continuing to stay fit. 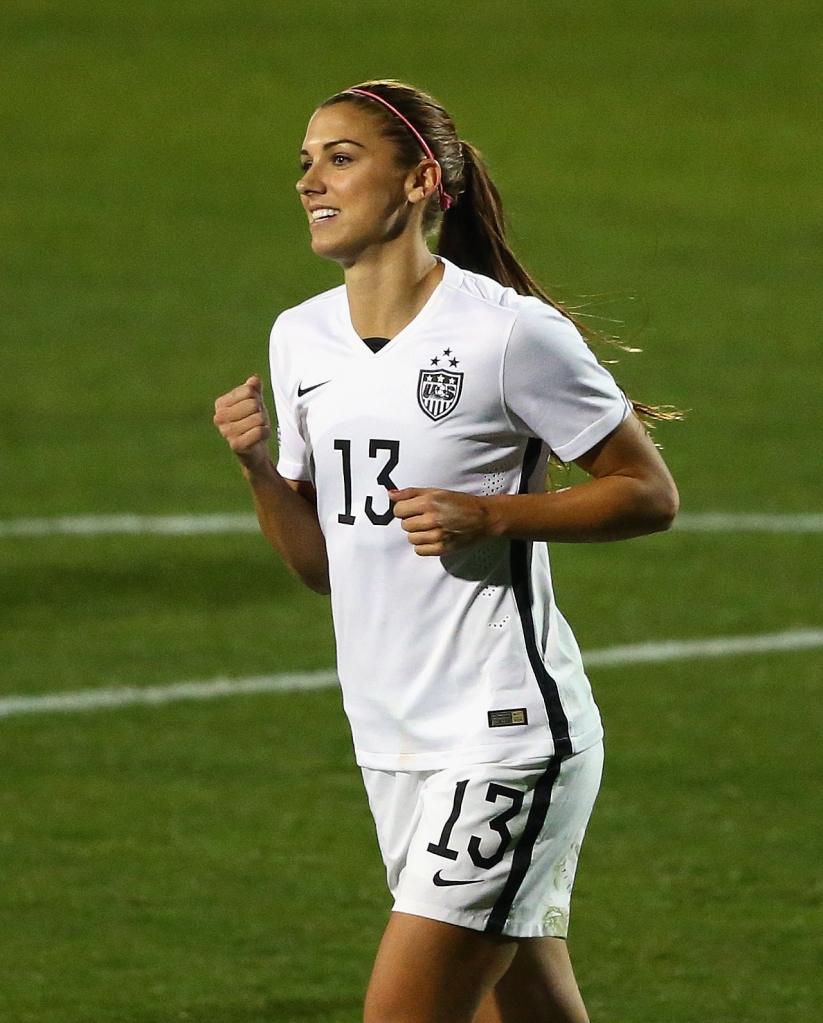 My favorite workout is: Of course playing soccer, but if I’m not doing that, either circuit training or doing stations like a couple of minutes each so you get a full body workout in an hour. [I enjoy] doing rope work with a big rope, and ball work. I train every day, and usually I have one day off every week. They range from two hours to three-and-a-half, maybe more. We’ll train more if we’re in pre-season.

The health trend I just can’t get behind is: I’m all about moderation, and I don’t like restrictive diets or to really restrict myself too much. I feel like what you put in your body is the energy and output you’re going to get so that’s very important for athletes.

For breakfast I have: Chobani yogurt with some toppings like fruit or granola, or maybe some agave. If I’m not training, I usually make a smoothie with fruit and yogurt. I usually eat at around 8 a.m.

For lunch I have: I normally have a salad or a sandwich with some fruit, and chicken or lean meat. Or again, I might have a smoothie. I eat anytime after training, as soon as I’m done, which is usually around 12 p.m. or 1 p.m.

My go-to smoothie recipe includes: Fruit like berries, bananas, and spinach, yogurt, sometimes granola, agave or some honey, and either water or apple juice. And I like to put chia seed and hemp seed in it too.

Today I snacked on: Some fruit, and sometimes I carry with my nuts, or like Chobani yogurt, maybe one of their flip yogurts because they’re a good source of energy and have a good amount of protein.

The health and fitness apps I used are: One that syncs to my Polar watch, and I have the Nike Training app, there are a ton, but they’re the two main ones.

The one thing I’d never eat is: There’s not anything I wouldn’t necessarily touch. I’m not super picky.

The three ingredients I always keep in my kitchen are: A good sea salt, extra virgin olive oil, and I like to make lean meat like chicken so I always have good seasonings.

My signature healthy dish is: A lot of times we’re so busy throughout the day I’ll just make something in the crockpot, and sometimes when I have extra time to put something together it’s usually some sort of meat and a lot of veggies. It’s pretty basic, but I like to incorporate fresh fruit and vegetables. I like to make my own hummus, which I make with Chobani yogurt. It’s really good. 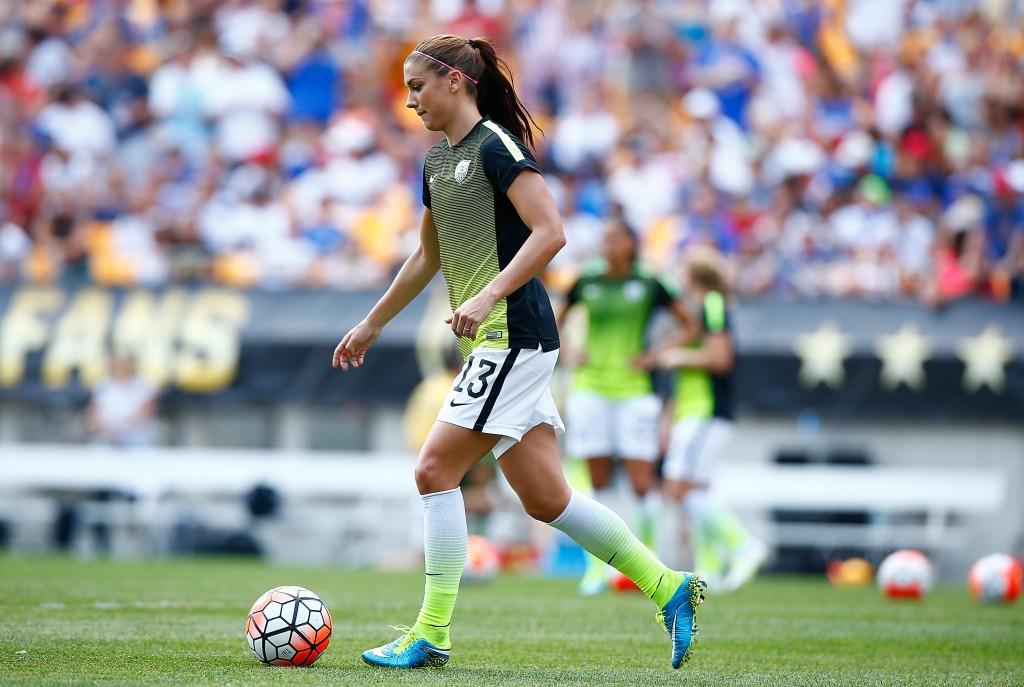 The most-played songs on my workout playlist right now are: When I workout on my own it’s less pop or rap music, and more Vance Joy, Kings of Leon, Mumford and Sons, and The Lumineers. I listen to that really poppy or rap music when I’m with my teammates.

The best part about my job is: I love the fact that I’m able to use the platform that I have in order to really speak up about the topics I’m passionate about. What I do has a great impact on young girls, and for me it’s important to speak about important issues and to hold that responsibility for inspiring the next generation of athletes.

The health and fitness trend I tip to dominate 2016 is: I don’t know, I stick to my own kind of soccer routine, but when I’m not playing I love to do spin classes and yoga and stuff, and I think spin classes are really popular. It’s a great workout if you can get in 45 minute to an hour.

My favorite healthy restaurant is: I always like to find new restaurants and cafes in the cities that I’m visiting because I’m always traveling around.